This Roast Turkey Galette Is the Ultimate Thanksgiving Leftovers Dish 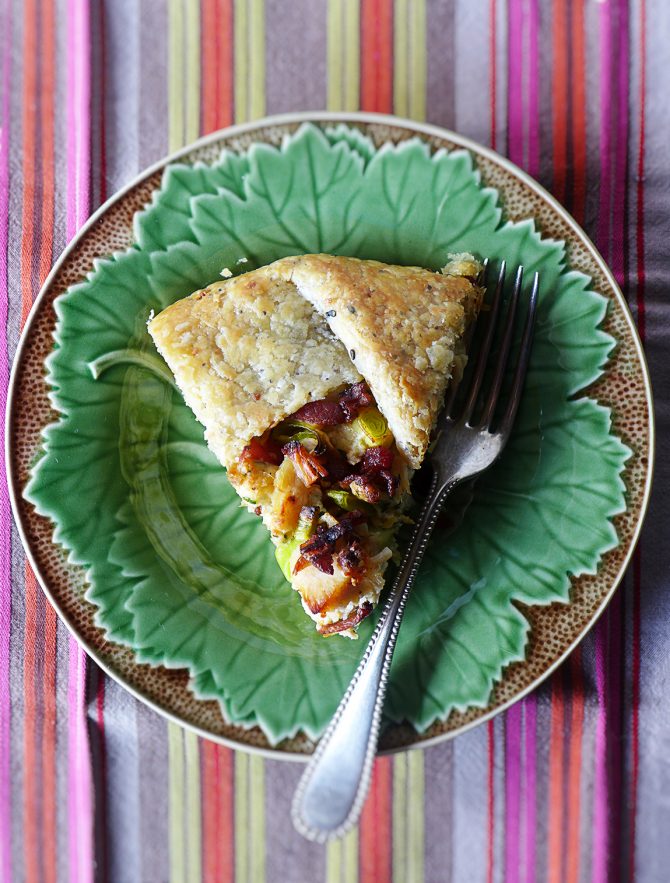 Here’s the thing about pies: They’re beautiful to look at, but that pie crust can give even the most seasoned of bakers difficulty. But those troubled days of dry pie crust are over, thanks to food writer Cathy Barrow’s cookbook “When Pies Fly,” a book that lets pastry dough have its much deserved time in the spotlight.

Related Reading: How Should You Store Your Pie?

When Pies Fly: Handmade Pastries from Strudels to Stromboli, Empanadas to Knishes, $15.99 on Amazon

In her book, Cathy presents a wealth of recipes—both sweet and savory—from around the world using pastry dough. The recipes run the gamut from galettes, hand pies, and tarts to empanadas, knishes, and kolache (Eastern European filled buns). Pastry dough will become the new cookie dough: You’ll be whipping up the likes of old-fashioned apple dumplings, tyropita (cheese-filled triangles), and crispy spring rolls, filling your home with flaky, crusty, delicious treats.

Many of Cathy’s recipes easily lend themselves to repurposing leftovers. In particular, her roast turkey, leek, and gouda galette is just dying to be made in the days after Thanksgiving. All you need is a batch of pie dough (her version calls for one flecked with everything spice, to really get in the savory mode), which is rolled out and piled with a mixture of cooked turkey, leeks, cream cheese, aged gouda, bacon, and fresh herbs. After Thanksgiving, the only energy you’ll want to expend is on this simple-to-put-together, yet elegant, galette.

Excerpted from “When Pies Fly: Handmade Pastries from Strudels to Stromboli, Empanadas to Knishes” by Cathy Barrow (copyright © 2019 by Cathy Barrow).  Reprinted with permission from Grand Central Publishing.  All rights reserved.

After a holiday meal, there’s always a little bit of turkey hanging around. Tuck it into this flavorful pie  reminiscent of a favorite deli sandwich. Even if it’s months until Turkey Day, consider roasting a turkey breast: Not only will the house smell terrific, a turkey dinner is always welcome, and it can lead to this satisfying pie.

Scientists say the sun is lazy and boring
Can you reuse tea bags? In more ways than one
Brain Fog Causes + 7 Natural Treatments
A Paleo Meal Planning Guide to Keep You on Track All Week
Facebook
Twitter
Pinterest
Print
Previous articleThe Best (Not-Boring) Ways to Use Your Thanksgiving Leftovers
Next article
The History and Mystery of Russia’s ‘Valley of Death’
- Advertisment -

Delegating Work: What to Delegate and What Not to?

Here’s a fact: You might have heard a lot about the importance of delegating work. But if you’re a new leader or manager, it won’t...
Read more

How to Write an Impressive Cover Letter (With Examples)

Think of your cover letter for a job application as an in-person introduction. Your resume outlines the facts—where you worked and for how long,...
Read more

What to Do If You Grew up in a Dysfunctional Family

No family is perfect! It's far from it. All families experience some level of dysfunction. Most, however, manage pretty well despite it. There are gradients...
Read more

Entrepreneurship is a constant learning process that’s going to be full of both peaks and valleys. Gaining knowledge from the people who have come...
Read more
Load more