The following is an adapted excerpt from my new book “Ancient Remedies: Secrets to Healing with Herbs, Essential Oils, CBD, and the Most Powerful Natural Medicine in History“ (Little, Brown Spark)

Have a fever? Take an antibiotic. High cholesterol? Use a statin. In pain? Pop an opioid. Feeling blue? Try an antidepressant. According to the Centers for Disease Control (CDC), 74 percent of doctor’s visits end with a scribbled prescription. It’s so common, many of us never think to question modern healthcare’s singular focus on medication. As a result, these lab-created drugs have stealthily taken over our lives.

Our culture has come to equate healing with drugs, so much so that many of us expect our doctors to give us medication, and we often feel disregarded or mistreated when we leave an appointment empty-handed.

Antibiotics are a tragic example. If you’ve ever had a chronic cough, or your child has had an ear infection, chances are your doctor prescribed one of these bacteria-killing drugs — and you might have been grateful to receive it. But here’s the thing: We now know that these medications aren’t effective at treating chronic coughs, ear infections and many other common ailments for which they’re routinely prescribed.

Worse, antibiotics can be far more dangerous than we’ve been led to believe. We’ve known for a long time that they wipe out billions of healthy bacteria in the gastrointestinal tract — microbes that play a vital role in helping us digest food, fight inflammation, and maintain a healthy mood and strong immune system. But did you know that taking antibiotics repeatedly might actually increase your risk of cancer?

An analysis of a large medical records database, published in the European Journal of Cancer, found that the more courses of antibiotics a patient took in the prior year, the greater their risk of esophageal, gastric, pancreatic, lung, prostate and breast cancers. Healthcare professionals in the United States write roughly 260 million prescriptions for antibiotics every year. Although the cancer risk from antibiotics is small, the drugs are jeopardizing millions of people’s health.

As appalling, at least 30 percent of those millions of prescriptions are completely unnecessary, according to the CDC, because they’re prescribed for conditions that don’t respond to antibiotics. (I believe that closer to 90 percent are unnecessary, since our bodies are capable of fighting most bacterial infections on their own; and if you need extra help, a number of herbs are effective antimicrobials, with few, if any, side effects.)

Those needless rounds of medication not only harm the health of people who take them, but they also contribute to the development of antibiotic-resistant strains of lethal microbes. At least two million people in the U.S. are infected with antibiotic-resistant bacteria every year, and 23,000 die because the bacteria have learned to outwit even our most powerful medications.

Antibiotic resistance is one of the most urgent public health threats facing the world today. If you have a life-threatening infection, taking antibiotics makes sense. In all other instances, I agree with the sentiment of Francis Bacon, an early champion of the scientific revolution, who noted in the 16th century, “Sometimes the remedy is worse than the disease.”

Antibiotics are the tip of the iceberg — and few people understand the true scope or seriousness of synthetic pills’ risks. You probably don’t know, for instance, that long-term use of most medications, both prescription and over-the-counter, can cause serious nutrient deficiencies. Proton pump inhibitors, which are routinely prescribed for acid reflux, limit the body’s ability to absorb vitamins B12 and C as well as iron, calcium, magnesium, zinc and beta-carotene.

They also raise your risk of dying from heart disease, chronic kidney disease and gastrointestinal cancer. Likewise, some diuretic drugs for high blood pressure deplete your body of calcium, magnesium, thiamin, zinc, potassium, folate and iron. These nutrients are absolutely essential for the healthy functioning of your brain, heart and muscles.

And those widely used types of drugs are just two examples, among dozens, of pharmaceuticals that can cause dire nutritional deficiencies. Check out this chart on commonly prescribed medications and the dangerous nutrient deficiencies they can cause. 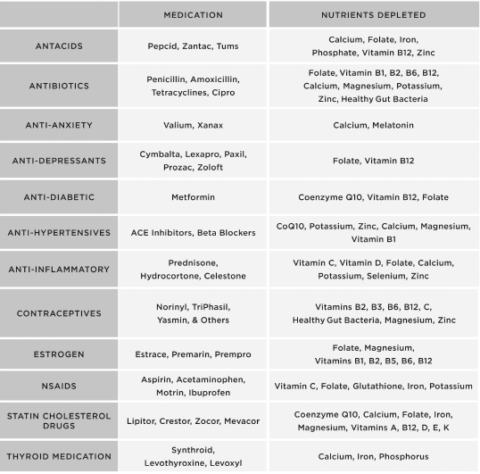 I took an oath when I became a doctor, as all physicians do. That oath was “First do no harm.” But how can any doctor be true to that oath if we rely exclusively on pharmaceuticals? As Sir William Osler, a revered Canadian physician in the 1800s, said, “The person who takes medicine must recover twice; once from the disease and once from the medicine.”

What I’ve shared is just a glimpse of the vast pharmaceutical-fueled tragedy that’s quietly unfolding across the country. But there’s a deeper truth that makes our dependence on pharmaceuticals even worse: For years, Western medicine has disregarded, ignored, maligned, and sometimes intentionally buried information about safer ancient alternatives. 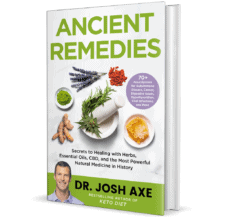 If you’re fed up with the big-pharma-driven status quo, and hungry for a natural, safe, and more effective approach, you’ll find hope — and help — in Ancient Remedies.