Host the Summer Brunch of Your Dreams

A wait-listed Japanese sleep massage promises to help us rest—but does it really work?

Eat Like an Astronaut: The Best Space-Age Food You Can Buy 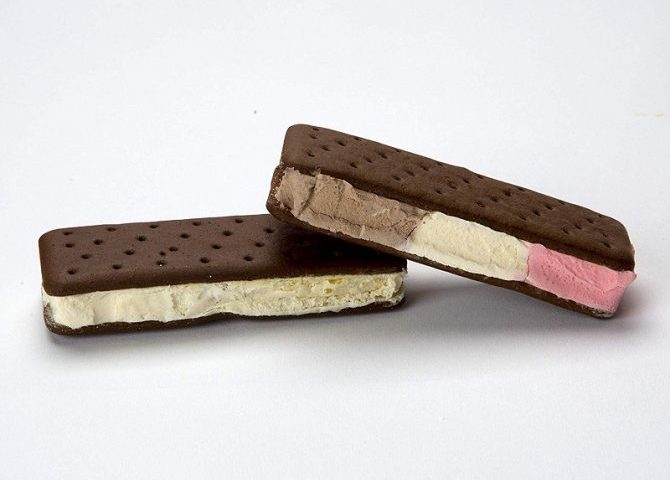 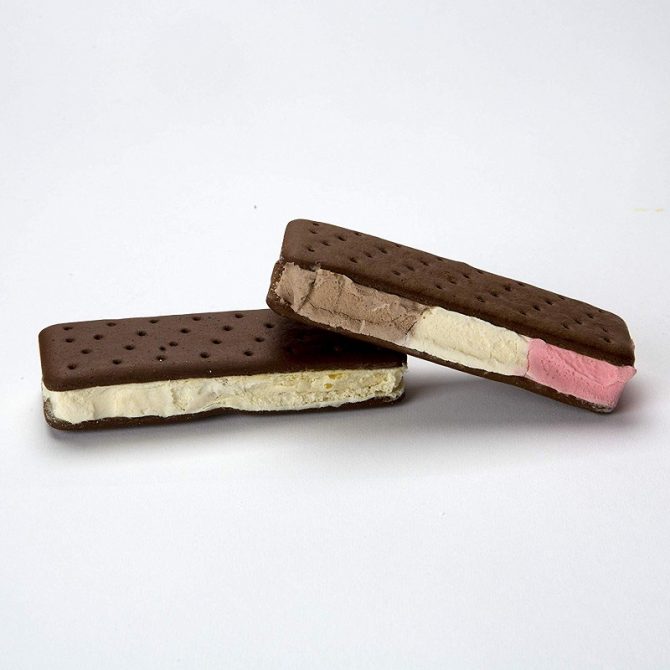 From astronaut ice cream to astronaut borscht, there are plenty of ways to eat like you’re in space. And what better time than on the 50th anniversary of the moon landing?

As the old saying goes, “the moon is made of green cheese”—or is it marshmallow and chocolate? July 20, 2019 marks the 50th anniversary of the Apollo 11 Moon Landing. To celebrate, the Kennedy Space Center at Cape Canaveral will be creating the world’s largest MoonPie. The giant confection will be a whopping 41 inches in diameter and will contain 60 pounds of marshmallows, graham, and chocolate.

If you’re craving some outer space-inspired food but aren’t able to make it to Cape Canaveral to witness this culinary feat in person (and fashioning a DIY MoonPie—or other galaxy-themed dessert—isn’t in the cards), you can still celebrate Neil Armstrong’s first steps on the moon by eating like an astronaut.

You could also try these limited-edition, moon-themed Oreos for the occasion.

A quick perusal of Amazon and you’ll find a surprising amount of food that was originally designed for space. From savory soups to a plethora of different ice cream options, here are a few out of this world food items that we’re curious to try. 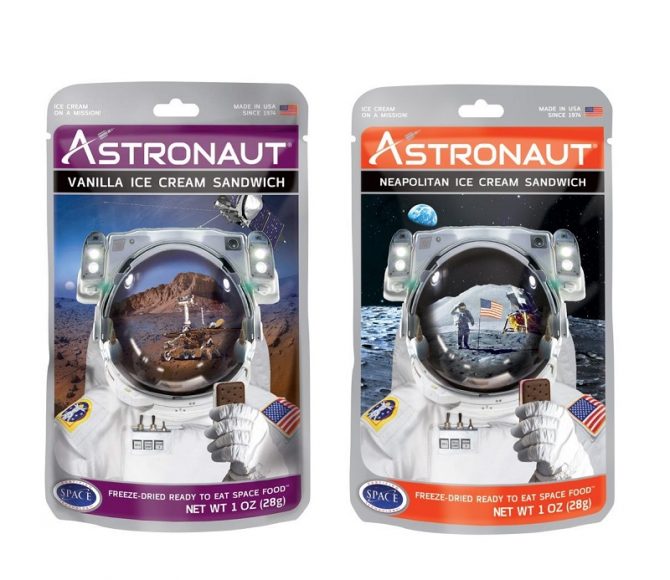 When it comes to space food, you can’t go wrong with the signature ice cream sandwich from Astronaut Food. This is the original freeze-dried ice cream developed for NASA in the 1960s. Available in a combo pack that includes vanilla and Neapolitan options, this space treat is 100 percent real ice cream that’s been frozen to -40F degrees, then vacuumed dry to remove more than 98 percent of the water. When you take a bite, the ice cream melts in your mouth, providing all of the flavor without any mess or refrigeration required.Buy Now 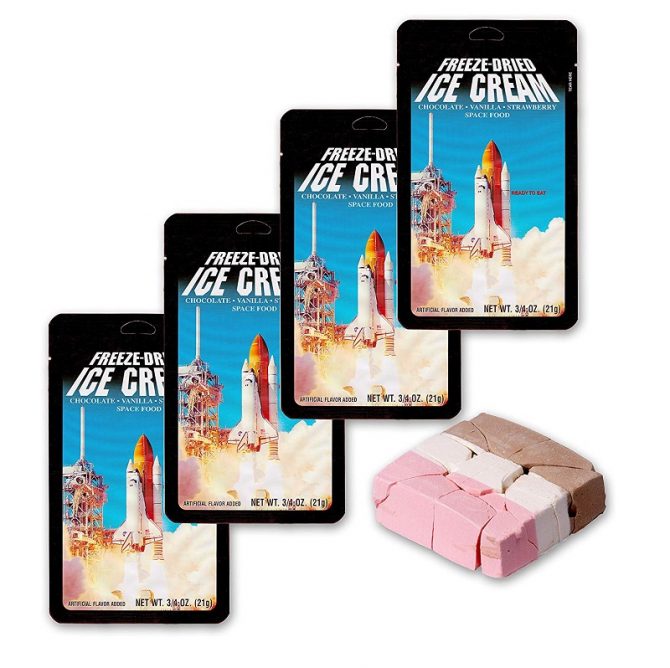 If you want to cut down on your gluten, skip the ice cream sandwich and go for this freeze-dried Neapolitan ice cream that was originally developed for early Apollo missions. The ice cream comes in a patty the size of a deck of cards. Note: because of how it’s made (by freeze drying and sealing it in a Mylar package), the ice cream tends to be in large chunks when you remove it from the package. However, despite the curious texture, customers say it tastes great and provides a good balance of vanilla, strawberry, and chocolate.Buy Now 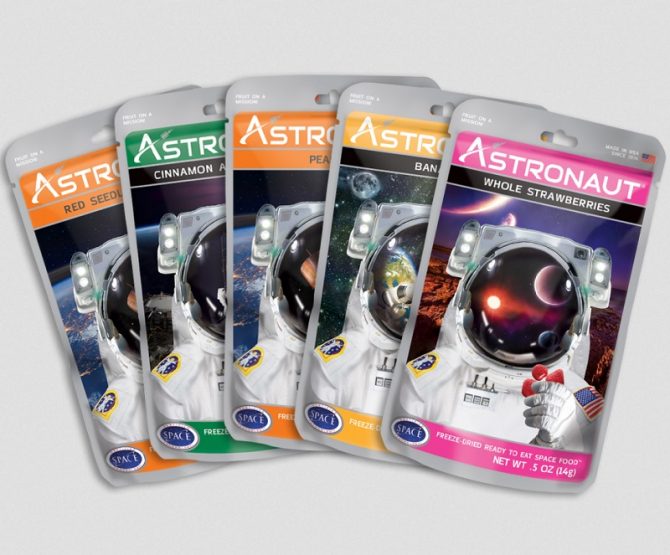 Originally developed for space, this Vitamin C-packed freeze-dried fruit sampler is made with real fruit (strawberries, peaches, bananas, seedless grapes, and apples with cinnamon). Perfect for providing a nutritious snack on the go, who knew that fruit could be this crunchy and taste so good?Buy Now 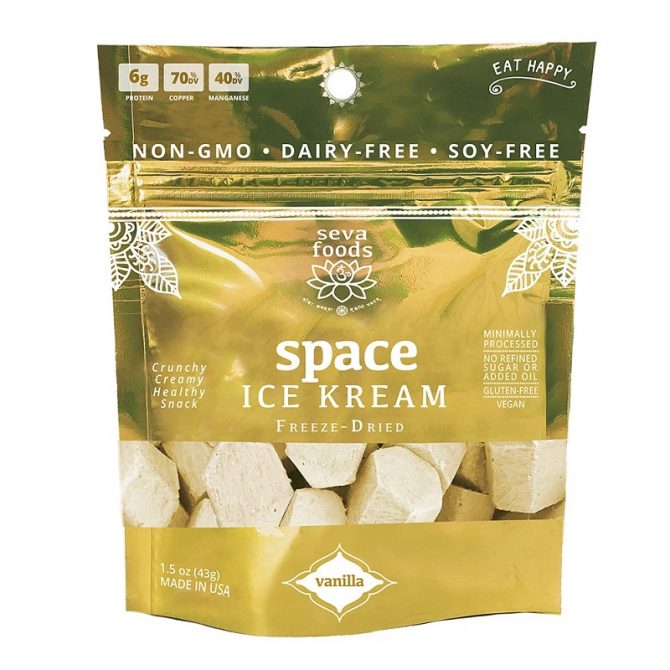 Keep things healthy-ish with this freeze-dried Ice “Kream” from Seva Foods. Space Ice Kream is made from just 6 ingredients and has only 110 calories per serving. It’s also non-GMO, organic, soy-free, dairy-free, vegan, and contains no refined sugar or added oil—making it the perfect snack for kids, hiking, or whenever you want a sweet treat on the go. Available in vanilla or strawberry.Buy Now 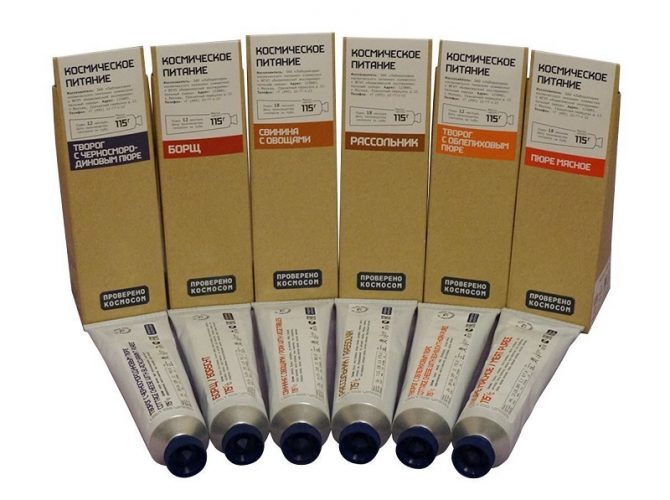 One of the most fascinating space food options we came across was this set of six dishes from Roskosmos. The collection of food in tubes is what’s used by Roscosmos (with a “c”)—the Russian answer to NASA. And yes, it’s very much authentically Russian. With this set you’ll get borscht soup (beef, fresh cabbage, beetroot, melted butter, sour cream, potatoes, and carrots); rassolnik soup (a traditional “pickle soup” made with salted cucumbers); pork with vegetables; meat puree (also containing sour cream); and two desserts (cottage cheese with sea-buckthorn puree and cottage cheese with blackcurrant puree).Buy Now 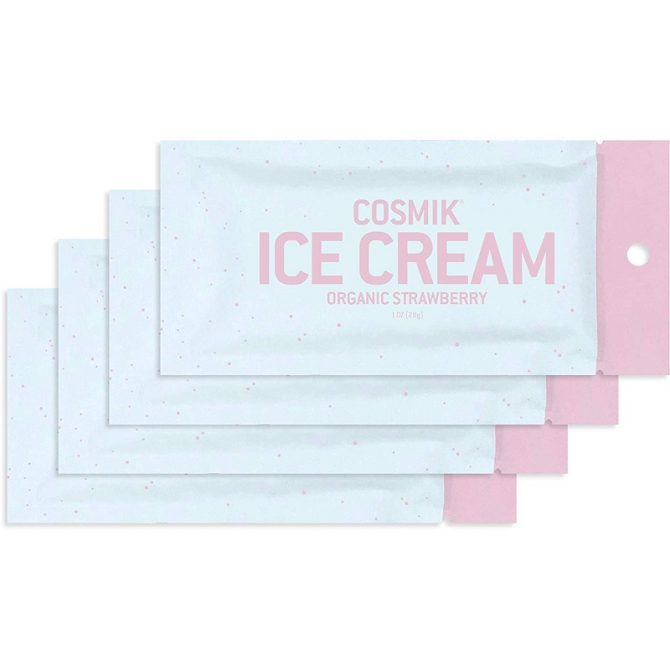 Looking for the perfect mix of sweet, tart, and organic? This freeze-dried ice cream made with organic strawberries hits the spot. Each package of ice cream is made using peak season strawberries free from pesticides and GMOs. It’s also gluten and soy free, making it a great option for folks with food sensitivities.Buy Now 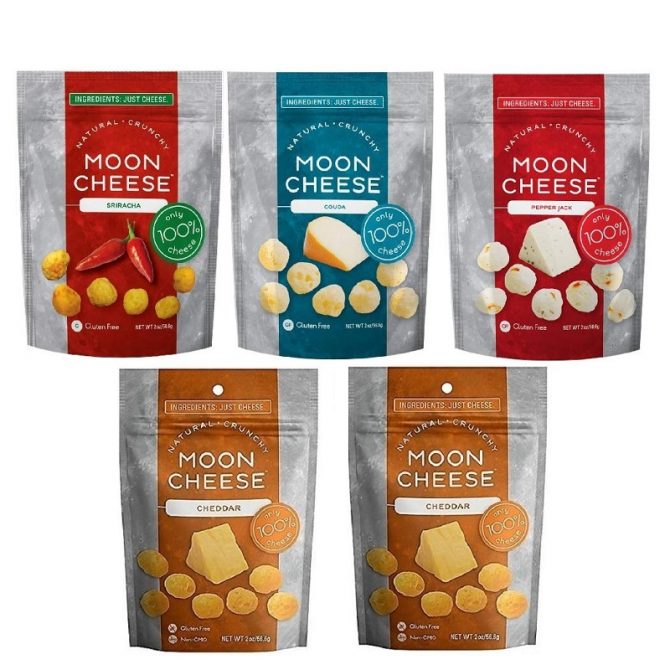 While the Moon Cheese website doesn’t mention whether their product designed for space, we couldn’t omit this crunchy cheese snack from the list. Similar to how space food is made, Moon Cheese takes an actual food (cheese) and freeze-dries it into a non-perishable form. The result is a snack that’s crunchy, cheesy, and packed full of protein. It’s perfect for hiking, road trips, desk snacking, or any time you need a nutritional boost. While the classic cheddar variety seems to be the most popular, this assortment also includes gouda, pepper Jack, and Sriracha varieties.Buy Now 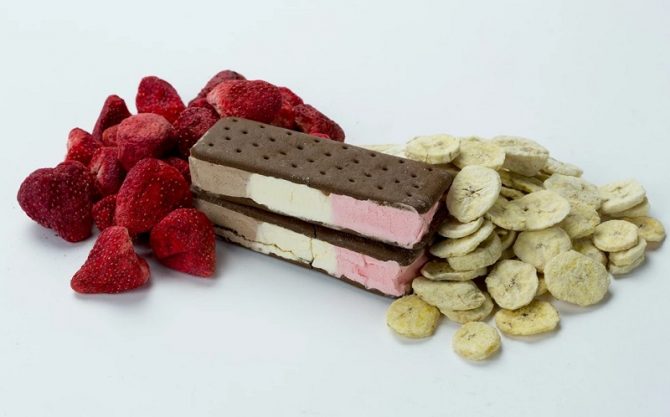 Now you can get a banana split wherever your adventures take you with this ice cream combo pack from Astronaut Foods. Each pack includes freeze-dried Neapolitan ice cream sandwiches, bananas, and strawberries. No need to refrigerate, defrost, or rehydrate. Simply put the sundae ingredients in your mouth and chew. With a shelf-life of 3 years, this a great treat to keep on hand for whenever an impromptu banana split craving strikes.Buy Now 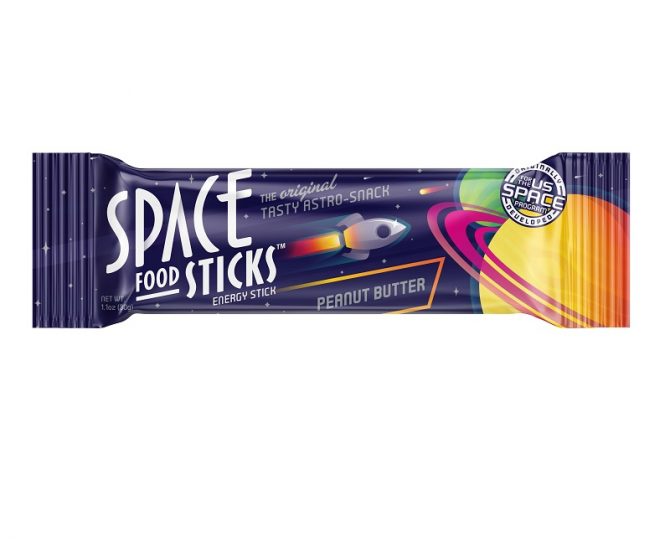 A forerunner to energy bars, Space Sticks were originally developed by Pillsbury in the 1970s as a food for astronauts, before being produced commercially. They’ve since received a 21st century revamp and are once again available for purchase. Each stick has six grams of protein and tastes like a peanut butter cookie coated in chocolate.Buy Now 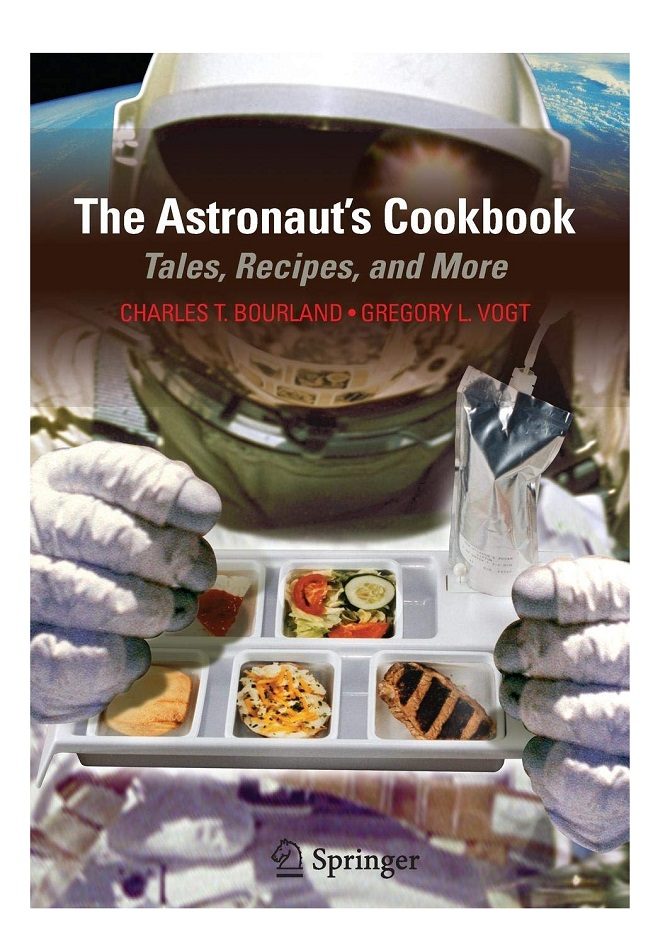 Feeling ambitious (or simply want to know more about eating in space)? This cookbook is for you. It’s chock full of historical tidbits (for example, it explains how NASA helped popularize Tang by using it on missions) and recipes to make your own space food at home. However, since some of the processing (such as freeze-dehydration) and high-tech packaging cannot be accomplished in your standard kitchen, recipes are extracted from the NASA food specifications and modified for preparation at home.Buy Now 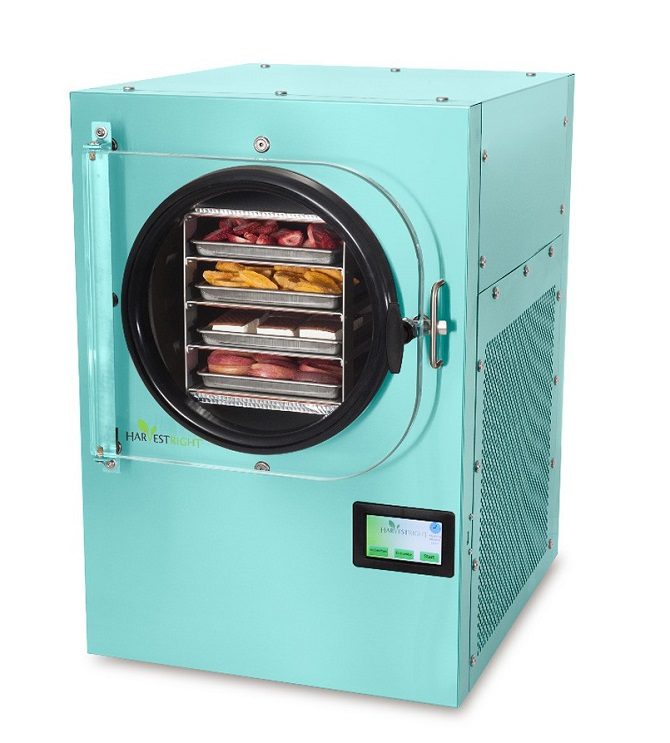 Aspiring space cooks (along with anyone who wants to create easy-to-store food) can take their kitchen experiments to the next level with this small at-home freeze dryer. Designed to be compact, the Harvest Right home freeze dryer has smart technology that makes it easy to place various types of food in the chamber, press start, and walk away. This device is perfect for preserving food and creating meals for your next outer space mission (real or imagined). And it’s still cheaper than booking a zero-gravity flight!Buy Now

7 recipes that prove your air fryer should part of *all* holiday cooking, from Thanksgiving to New Y...
Friday Food Finds: Cinnamon Coke, Alcoholic Candy, Twinkies Cereal, and More!
The Ultimate Summer Stone Fruit Guide
This At-Home Facial Can Give You Glowing Skin In Just Six Easy Steps
Thanks to Mercury, Mars, and Pluto, you can expect an independent and creative week
7 Red Flags That Might Mean Your Spouse Is Having An Affair
8 Indian Foods You Must Try During Monsoon
SHOP