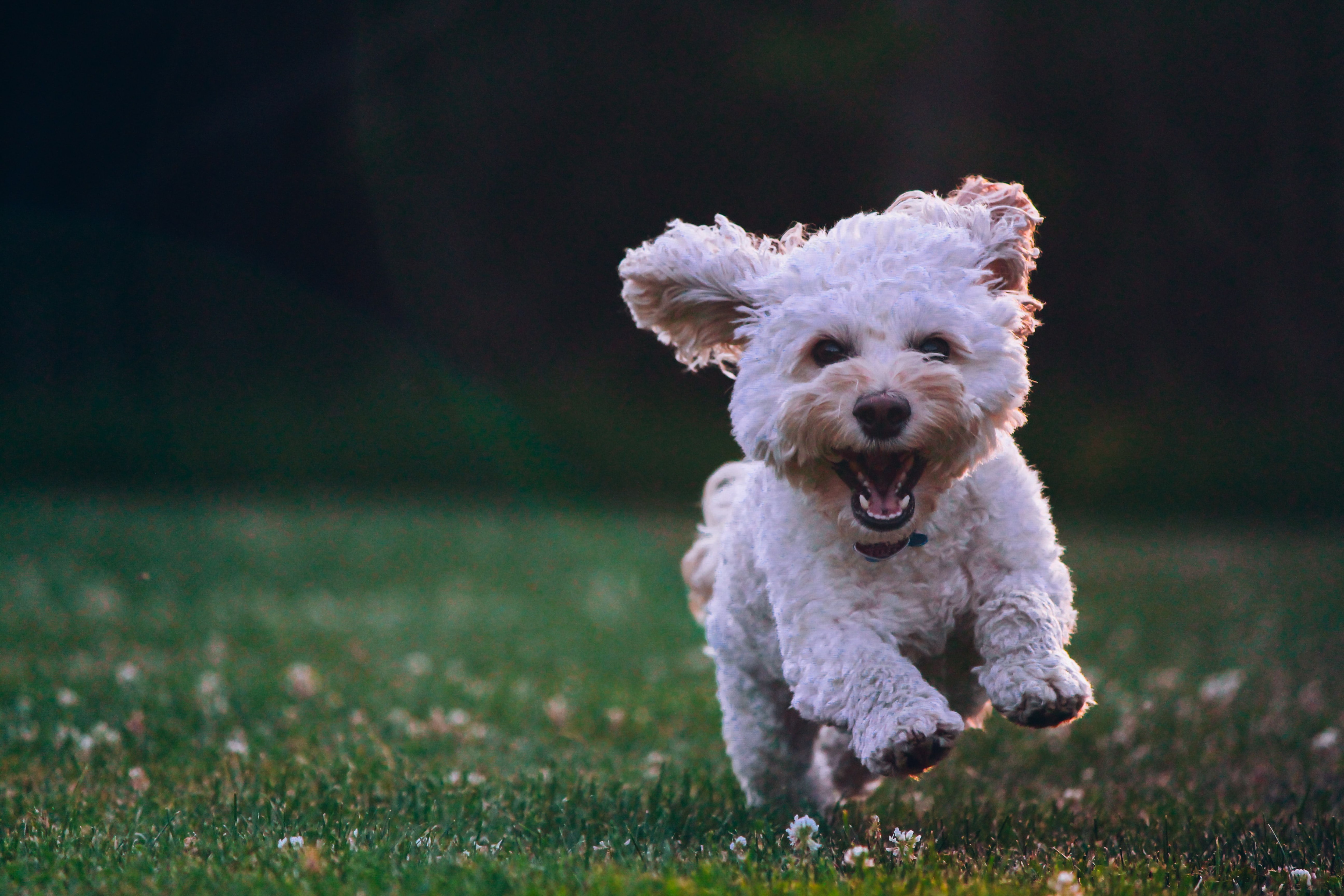 A real dog doesn’t need to be programmed to move, but a robotic dog does. And that’s hard. (Photo by Joe Caione on Unsplash/)

Anybody who has ever observed a dog moving around—maybe it’s just walking, jumping, or catching a frisbee—has probably noticed just how dynamic, complex and natural a canine’s motions can be. The animal probably doesn’t think much at all about the order in which it puts its four paws on the ground when it’s trotting along. It just does it.

Now, imagine you had a robotic dog, and you wanted to try to program it to just do something basic, like walking. Even if you were a skilled programmer, you’d likely find it a daunting task to get your mechanical canine to smoothly carry out actions like that, let alone a furry frisbee jump.

To try to find a faster, more scalable approach, researchers from Google and the University of California, Berkeley, turned to data of actual flesh-and-blood dog movements to train their robotic pooch to carry out tasks like walking at different speeds or spinning. “Our idea is that maybe we can have robots learn these skills more easily by showing it examples of animals moving around in environments,” says Jason Peng, a student researcher at Google, doctoral candidate at Berkeley, and the first author of a paper describing the project.

After all, animals are naturally great at carrying out “agile behaviors,” he adds. But reverse-engineering those actions and getting a robot to do them? That might be harder than training an unruly mutt not to beg for table scraps.

Rather than collecting entirely new information about doggy motion for this project, the team used data that already existed that came from a single canine. “There was a public dataset available of different dog motions,” Peng says. Motion-capture data of that dog from that work gave them the information they needed.

But it wasn’t as easy as just downloading that information into the brain of a physical bot. The next steps involved using computer simulation so that a virtual version of the robot could learn to mimic the real dog’s actions. (European researchers have also turned to simulation and AI to get a robotic dog to learn.) This part of the project involved using machine learning—a form of artificial intelligence—to get the virtual robot to get the new skills. “The learning algorithm was trying to find a way that lets the robot reproduce the motion as closely as possible,” Peng says.

After all, a robot is different from a real dog. For one, its body is less flexible. “The robot doesn’t have a spine—its body is just kind of like a brick,” he adds. The AI had to get the robot to match the real animal motion as best as it could.

Eventually, after that simulation time, they transferred that knowledge into a robot. That step isn’t totally straightforward, either, because computer simulation is not a perfect representation of the real world. 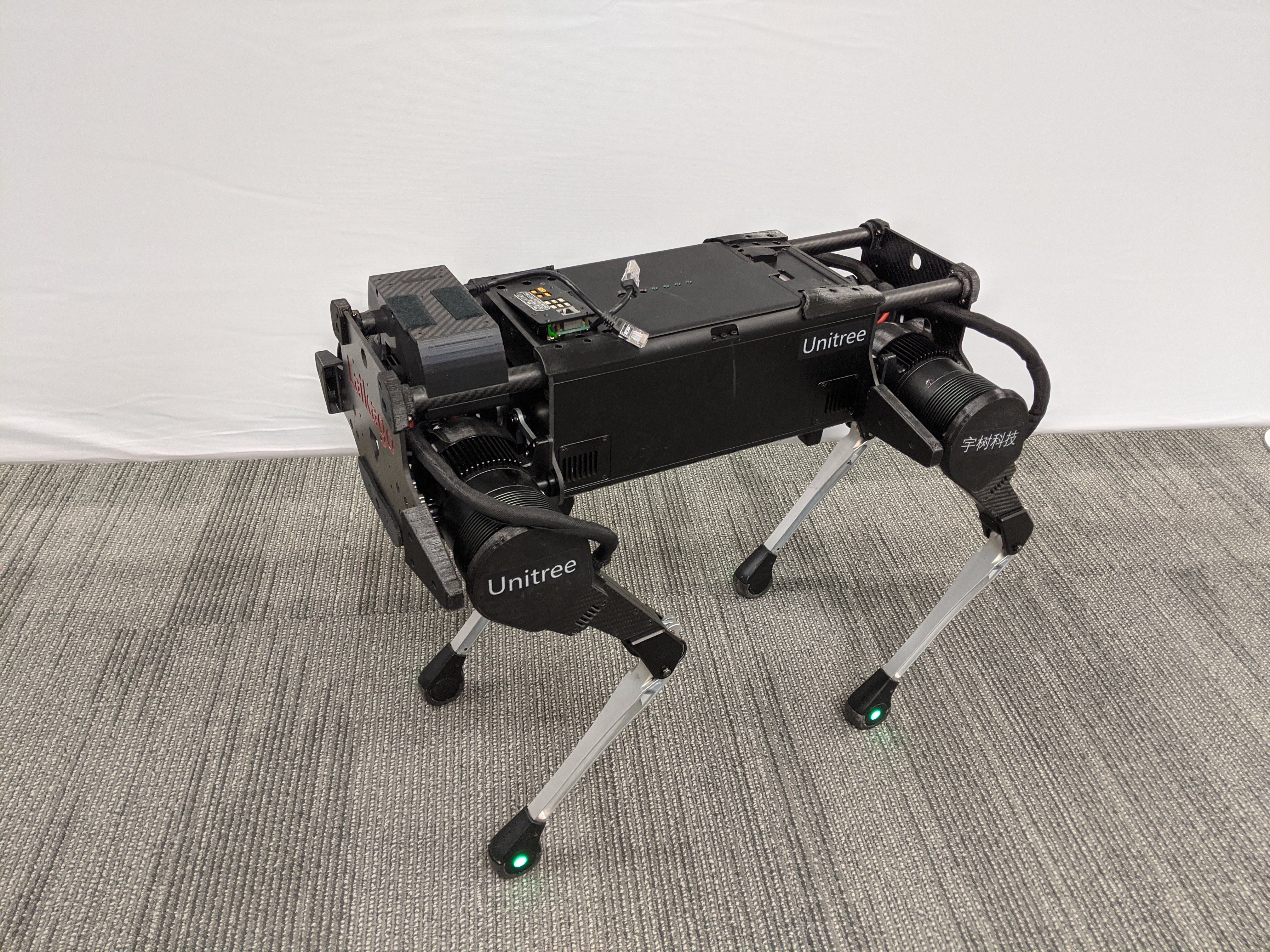 The bot. (Courtesy of Google/)

The end result was that their robot could carry out actions it learned from real dog behavior, with simulation and artificial intelligence and other adaptive measures as crucial intermediary steps. Stuff it could do? “A bunch of locomotion skills, like different walking gaits,” Peng says. “Also, some spinning and turning motions.” It even walked backwards.

Harder stuff for the robot to execute was quick, dynamic actions, such as a fast run or a jump. That so far hasn’t been reproducible.

Peng says that using this method to teach the robot to carry out tasks was faster than it would have been if they’d had to code these skills step by step. “Even for something like walking—it’s been something that has been studied for decades in the robotics community,” he notes. But he hopes that roboticists could use this approach to not only make it faster and easier to teach robots skills, but increase the complexity of those actions, too. With walking, “we have the benefit of many years of study,” he says. Something fancier, like hopping and turning? This method could make those advanced moves easier to program.

The Google-trained bot is certainly not the only mechanical pooch on the block, though. The most famous is Spot, from Boston Dynamics, which was controversially tested out by the Massachusetts State Police last year.

Check out video, below, of the Google dog project.

‘Black Radio’: How Robert Glasper Captured The Black Creative Diaspora
Cauliflower Is King: Here’s Why It Rules
The Greatest Banquet in Chinese History That Never Was
8 healthy vegan Instant Pot recipes that will make meal prep a breeze

If you’ve ever cooked with garlic (and really, who hasn’t?) you know that the task of peeling it can be tedious and annoying. Not only is it time-consuming, but it…

My little brother and I recently engaged in a heated conversation about who’s the favorite child between us and our two other siblings. We’re all grown adults, yet this debate…

An ice cream cake is a thing of beauty; the best of cake and the best of ice cream, combined as one cool, whipped cream–topped slab on a paper plate.…

If you’re looking for a new psychiatrist or OB/GYN, it’s not the easiest task in the world but there are plenty of places to start your search: your insurance company’s…