How Did Fudge Become a Staple of Tourist Towns? 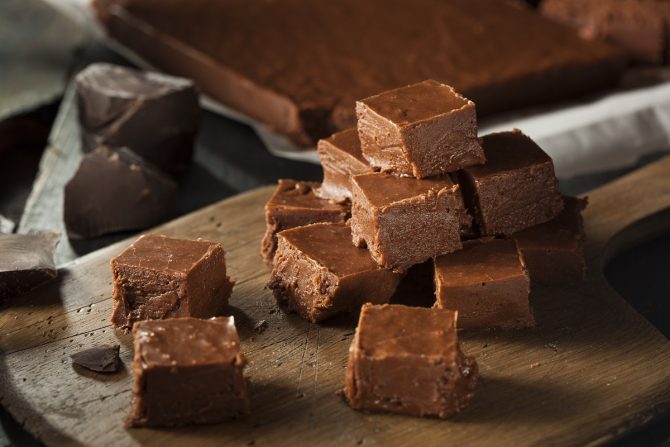 Along with the usual glut of novelty magnets, key chains, t-shirts, and shot glasses at any given tourist stop, you’ll probably also find fudge. Like salt water taffy, it’s become a staple of coastal candy shops in particular, but it’s also made its way inland, and is advertised in nearly every vacation spot in America. Why is that?

There are a few reasons, but before we get into them, let’s go over a brief history of fudge itself. It’s surprisingly mysterious, in that no one knows exactly who invented it, or when—but the oft-repeated theory is that it was a mistake.

The Meaning of Fudge (& Fadge)

The word “fudge” existed before the candy that would be so named, and since at least the early 1800s, has been used to mean nonsense or to express annoyance (its technical definition was “to fit together in a clumsy or underhand manner”).

Chocolate caramels have been around since the 1860s; they were quite similar to fudge (see the recipe in this 1870 cookbook from Maryland, for instance), though not identical. Speculation says the soft, rich confection we know today may have been the result of a bungled batch of caramel, with the candy being creamy and crumbly instead of slick and chewy thanks to the unintended formation of tiny sugar crystals, perhaps from stirring one too many times. 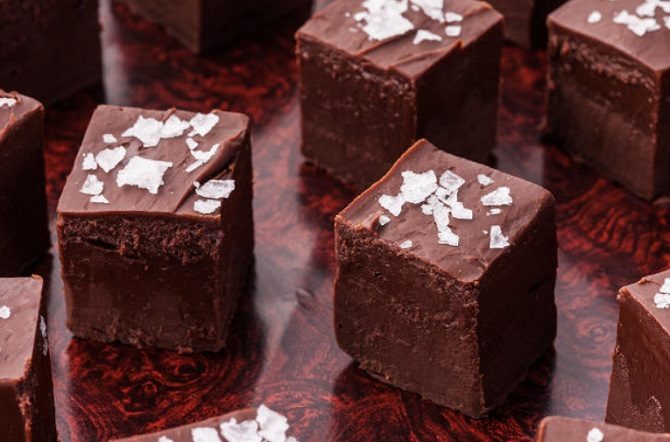 The unexpected outcome may have caused the candy maker to say, “Oh, fudge!”—but once they tasted it, they would have known what a happy accident it was. (Unless, of course, they did it on purpose, in which case, their original records and recipe have never been discovered. “The Oxford English Dictionary” suggests the culinary term fudge may have come from an older word “fadge,” meaning simply “to fit together,” or even “to turn out well,” which would suggest intent rather than accident, but the other story is better and more widely distributed. Incidentally, there is an Irish potato bread called fadge that has no relation or resemblance to the confection fudge—but mashed potato fudge does exist; still, it’s clearly an outlier.)

Fudge Was Once a Hot College Fad

In any case, creamy chocolate fudge really took off thanks to Poughkeepsie, New York’s Vassar College, where making it was a certifiable fad. It started with student Emelyn Battersby Hartridge, who made 30 pounds of the stuff for Vassar’s senior auction of 1888. She reported getting her recipe from a classmate’s cousin who had been selling fudge in Baltimore since 1886, and this is the commonly accepted first proof of fudge (although Florida’s Gulf Coast Fudge Co. claims to make their namesake sweet from a recipe unchanged since 1837)…

Regardless of where (and when) it originated, other Vassar students eagerly took up the tradition of making fudge, cooking it right over the gas lamps in their dorm rooms. 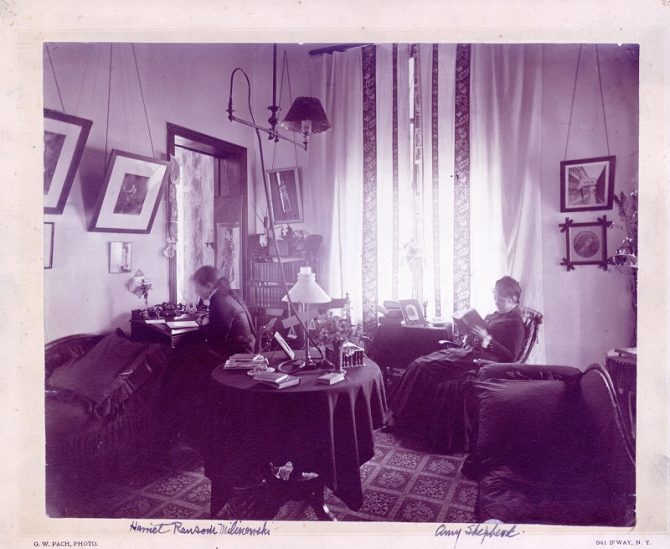 Yesterdish.com chronicles how the popularity of “Vassar Fudge” spread to other colleges, and then to wider audiences throughout the country via newspaper pieces and reprinted recipes (much like the rise of Texas-born German Chocolate Cake).

In short order, entrepreneurs latched onto fudge as an obvious money-maker—sweets have always sold, and fudge can be finicky to make at home (especially if you’re not using corn syrup or condensed milk for “foolproof” fudge), so it would have made sense to hawk it in various locations, but its rise in popularity happened to coincide with the emergence of American tourism.

Fudge showed up everywhere there were likely to be crowds—with people on vacation apt to be feeling extra indulgent, hence more likely to buy sweets. (At the time, candy in general was considered more of a special occasion treat anyway, not something to mindlessly grab at the grocer’s, and what could be more special than a holiday?) Fudge travels remarkably well compared to more delicate chocolates, which probably also accounts for its strong showing in vacation spots and status as a classic souvenir item.

Related Reading: Why Grocery Shopping Is the Best Food Tour

It helped that making large batches of fudge involved an element of spectacle too; massive copper kettles were used to boil the sugar and other ingredients, and then the vats of molten chocolate candy were poured out onto broad marble slabs and pushed around the surface with long-handled trowels to hasten the cooling process and shape the fudge before slicing. National Geographic describes a 1901 pamphlet written for professional confectioners, which says “people will stop to see almost anything done…especially if the performance requires some particular knowledge.” 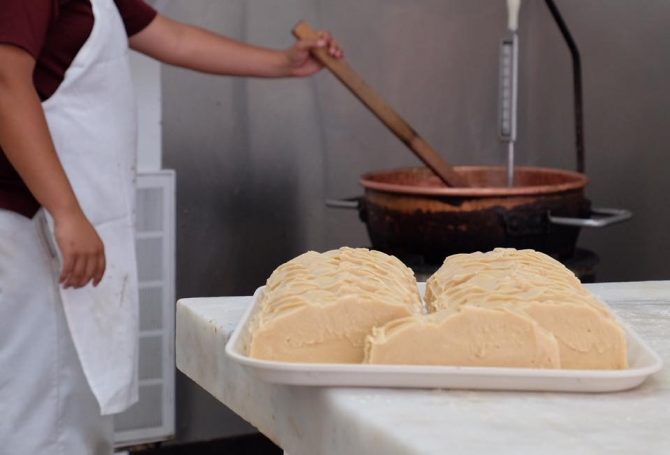 If they stopped to watch the fudge being made, they’d probably step in to buy some, too. (Rocky Mountain Chocolate Factory relied on this truth to resounding success, even though they didn’t get into the game until 1981.) To increase their chances of a sale, candy shops commonly used fans to waft the intoxicating scent of sugar, butter, and chocolate outside as well, a trick that’s still employed today, if in sneakier forms.

Fudge shops were established in spots like Niagara Falls and Atlantic City, N.J. by the late 1880s, and one destination, Mackinac Island, Mich., still bills itself as not only a quaint tourist destination (the entire island is registered as a National Historic Landmark and cars are banned), but as “America’s Fudge Capital.” There’s an annual Mackinac Island Fudge Festival—from August 23-25 in 2019—and tourists there are known as “fudgies.” The oldest candy shop on the island is Murdick’s, which opened in 1887 and is still in business today, but there are plenty of other shops on Mackinac where you can pick up a sweet souvenir. 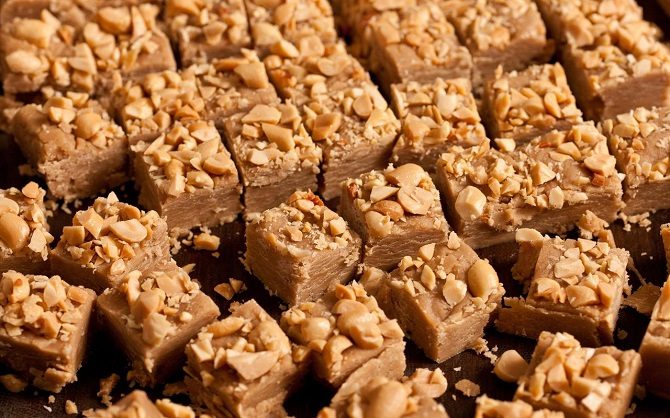 And you’ll be sure to find fudge as far afield as west coast beach towns and even in England, because it’s still considered an indulgent treat perfectly suited to vacation—but it also has old-fashioned appeal that plucks a nostalgic chord in many hearts. It hearkens back not just to other vacations but to centuries past.

So now, whether strolling down a boardwalk or exploring a historic main street from Mystic, Conn. to Port Townsend, Wash., “Oh, fudge!” is likely to be something you’ll utter with pure delight.