Home BuzzFeed Looking back on 50 years of Earth Days
BuzzFeed

Looking back on 50 years of Earth Days

The first Earth Day was a student-focused, grassroots movement that dealt solely with environmental issues in the United States. In the 50 years since, it has evolved into a worldwide day of action involving thousands of organizations, many of which are larger and have more money than those who took to the streets in 1970.

Still, even as the issues have changed, the general message of saving the planet has remained largely the same. The first generation of participants targeted air and water pollution and hazardous waste—which are still a challenge today—but modern activists are also staring down problems such as climate change, the loss of biodiversity, and the fact that plastic seems to be everywhere.

Today, more people understand local groups are fighting on the front lines while their communities—many of which are poor or have been long-neglected by the national conversation—take the brunt of environmental damage. It’s also more clear that environmental issues don’t stand alone and have far-reaching effects that touch industries including food production and transportation, Shepard says.

“It means a whole lot more to a lot more people and more diverse constituencies than ever before,” Shepard says. “All sectors are understanding how saving the Earth and our environment really impacts them.”

So in honor of the 50th anniversary of Earth Day, let’s take a look back to understand how we got here and try to get a glimpse of where environmental action might be headed. 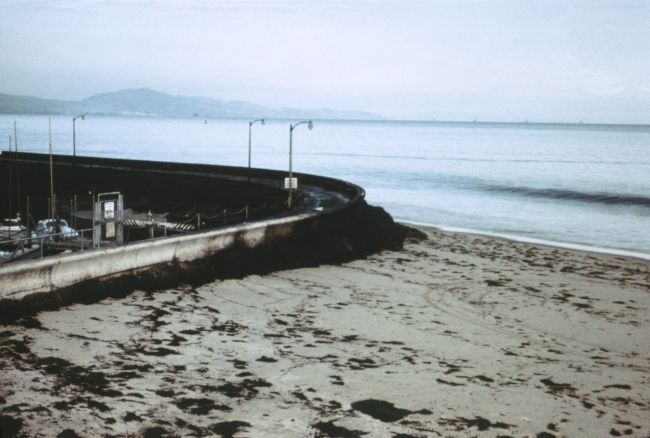 Oil piles up along the seawall near Santa Barbara Harbor in California, and the waves are black with petroleum. (US Geological Survey/)

Eight days after Richard Nixon was sworn in as the 37th US president, a blowout at a Union Oil drilling platform off the coast of Santa Barbara, California, spewed an estimated 80,000 barrels (3.4 million gallons) of oil into the Pacific Ocean. Thousands of seabirds, dolphins, sea lions, and other marine creatures died. It’s still the third-largest oil spill in the nation’s history.

The oil slick caught the eye of then-US Sen. Gaylord Nelson (D-Wisconsin), as he sat on a plane flying from Los Angeles to Seattle. According to a 2018 Pacific Standard article, the sight of it inspired him to find a way to bring conservation issues into the national spotlight. In 1995, Nelson received the Presidential Medal of Freedom from President Bill Clinton for his role in getting the movement off the ground.

Denis Hayes, whom Nelson had hired to organize the first Earth Day, was one of the speakers at the event. He later told the Pacific Standard that the people gathered that day may have been the first huge crowd he’d seen that was extremely passionate about environmental issues. 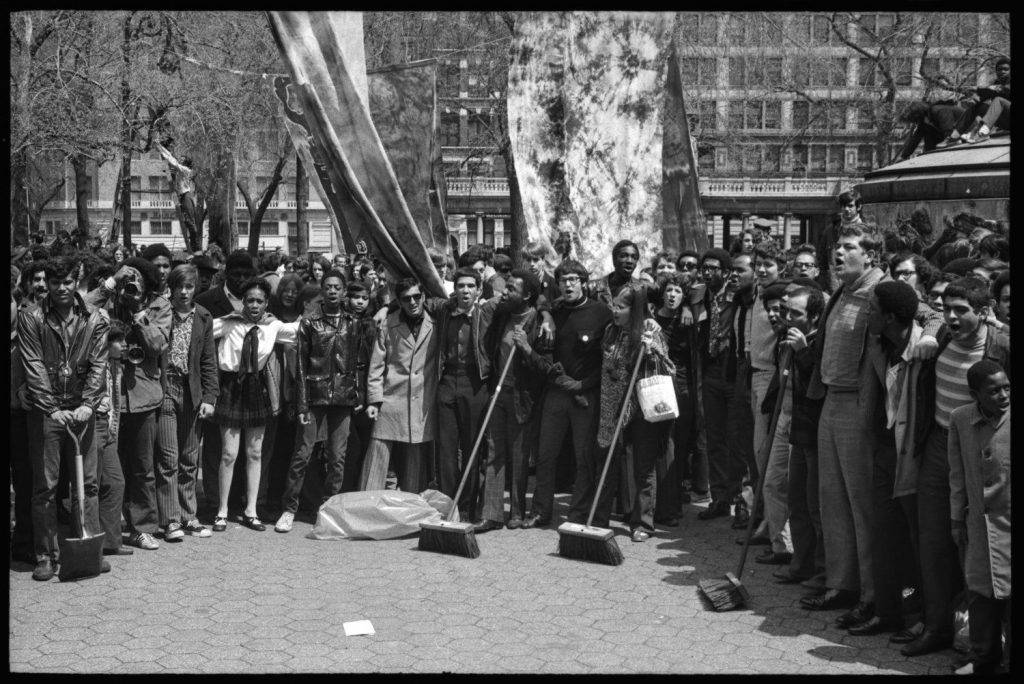 Inspired by the teach-ins used to protest the Vietnam War, Nelson spent the months following the oil spill planning an environmental teach-in on college campuses nationwide. He chose April 22 because he wanted the highest possible attendance: it fell between spring break and final exams, didn’t conflict with any other holidays, and, as a Wednesday, meant students would not likely be attending other campus events.

Nelson wanted the event to be called the Environmental Teach-In, but marketing it as more of a lecture didn’t appeal to college activists. Those who wanted to get involved wanted action, not debate. Up stepped well-known copywriter Julian Koenig, who volunteered to help come up with a better name. He offered a few, but his favorite was Earth Day, and it stuck. Koenig later said he was partially inspired to create that name because he was born on April 22 and “birthday” rhymed with “Earth Day.”

Ultimately, an estimated 20 million people participated in Earth Day events nationwide. Susan Bass, now vice president of programs and operations for Earth Day Network, the organization that coordinates Earth Day events globally, was one of them. She remembers picking up trash as a Girl Scout in a park in Millburn, New Jersey.

The Environmental Protection Agency’s own EPA Journal later said the “phenomenal success” of the first Earth Day helped push Nixon, a Republican, to create the EPA. In particular, the journal said the event most likely strengthened the argument that the US needed an independent agency to coordinate all of the new administration’s environmental plans.

The buzz around Earth Day was relatively quiet for the next two decades, but as its 20th anniversary approached, interest heated up. Two groups formed to organize and sponsor events: Earth Day 1990 and the Earth Day 20 Foundation. Hayes led the former, while Edward Furia, a lawyer who organized Earth Day events in Philadelphia in 1970, headed the latter.

On Jan. 3, 1990, President George H.W. Bush made his official Earth Day declaration. “Earth Day—and every day—should inspire us to save the land we love, to realize that global problems do have local solutions, and to make the preservation of the planet a personal commitment,” he said.

In a stark contrast to the student-led actions of the first Earth Day, the 1990 event was bolstered by radio and television coverage, intense marketing, and big budgets. The two groups didn’t share exactly the same strategy, though. Earth Day 20, for example, considered itself more of a grassroots organization with a combative attitude toward industry and criticized Earth Day 1990 for including the CEO of tech giant Hewlett-Packard on its board of directors.

Events included the Earth Day 20 International Peace Climb at Mount Everest, an expedition led by 61-year-old Jim Whittaker, the first American to summit the world’s tallest mountain. It was also the first time mountaineers from the US, the Soviet Union, and China had climbed together. They planned to reach the top on Earth Day, but bad weather delayed their ascent and they didn’t top out until May. Along the way, they collected two tons of trash left by previous expeditions and sent it back down the mountain with support groups. Everest’s litter problem persists today.

Earth Day entered the new millennium online, as 2000 was the first year the internet served as a primary organizing tool. With the world wide web’s ability to easily connect people, more than 5,000 environmental groups in 183 countries reached out to millions of citizens. In the US, thousands of people gathered on the National Mall in Washington, D.C., to hear speeches from Vice President Al Gore and others. Actor Leonardo DiCaprio, a few years removed from his role in Titanic, hosted an Earth Day television special on ABC.

The 40th anniversary of Earth Day resembled its other 10-year milestones, and Earth Day Network, a group founded and chaired by Hayes, organized the day as it had in previous years. Across the US, there was a carbon-neutral festival in Los Angeles, a march on the National Mall, and other events aimed at raising awareness of environmental issues.

Earth Day 2016 was a historic day in the eyes of United Nations Secretary General Ban Ki-Moon, as 175 world leaders signed the Paris Agreement, which aims to limit the increase in global temperatures to less than 2 degrees Celsius. Ban said the overwhelming number of countries that pledged their support proves the world is determined to do what it takes to protect the environment.

The US, under then-President Barack Obama, was one of the countries to sign that day, though President Donald Trump has since announced his intent to withdraw from the accord. Per the rules of the agreement, his first opportunity to do so will be in November. 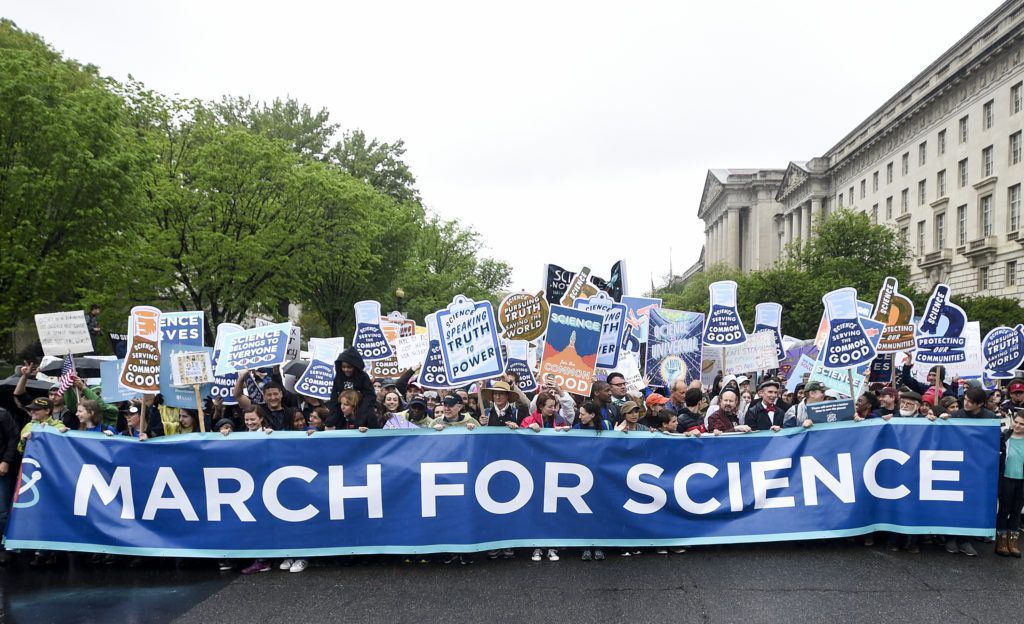 The first March for Science in 2017 drew thousands of people to a dreary Washington, D.C. in support of science. (Courtesy of Earth Day Network/)

Spurred on by what many saw as a growing opposition to science both domestically and worldwide, Earth Day Network helped organize the first March for Science on the National Mall for Earth Day 2017.

A number of science historians told the Washington Post that such a march involving the scientific community was rare and its only parallel may be scientific groups’ opposition to nuclear war during President Ronald Reagan’s administration. Speakers included Hayes and Bill Nye.

This year’s Earth Day will be entirely digital due to the outbreak of COVID-19. A number of government and religious leaders, activists, actors, musicians, and others have created personal video messages for the 50th anniversary, and Earth Day Network is hosting a 12-hour digital event from 9 a.m. to 9 p.m. Eastern Time on its homepage.

Across the world, local groups have partnered with Earth Day Network as everyone shifts gears to react to the pandemic. One example is the Barka Foundation in Burkina Faso, which originally planned to work with several schools but is instead distributing soap and information about proper hand-washing techniques to the African country’s many domestic refugees. This community is extremely vulnerable to the new coronavirus, Bass says.

Earth Day Network has also created a citizen science app called Earth Challenge 2020 for Android and iOS. The app aims to collect data from users about environmental problems in their area while also teaching them about issues and providing them with opportunities to get involved.

“I think it’s important for people to understand individual action and participation still really matters,” Bass says. “The environmental movement is still really a grassroots movement and people need to feel their action can make a difference.”

Many local groups are holding their own events, too. WE ACT, for example, had planned a 5K for April 18 in Manhattan’s Riverside Park, but when the city shut down, Shepard’s group moved it online. Participants can still sign up and run in a safe place at their own convenience until April 26.

“For some communities, Earth Day is every day,” Shepard says. “Fortunately, we have people all around the world who think that way, and that’s what’s going to save us.”

Although Earth Day has made great strides toward involving more diverse communities and activists, some environmental leaders say there’s still more to do. Often, poor communities and people of color are the hardest-hit by environmental disasters, and the organizations working daily with those populations need to have their voices heard.

That doesn’t mean simply adding people from those communities to larger groups—it means involving local groups completely. “Communities that are most impacted should be in the room when decisions are being made,” says Robert Bullard, a professor of urban planning and environmental policy at Texas Southern University. “When we don’t protect the weakest in our society, we place everybody at risk.”

“This is a war, and again, it’s been 50 years,” Bullard continues. “Let’s celebrate, but let’s not celebrate too long, because we have lots of work to do.”

How to Make Great Coffee When Traveling
The 6 Most Curious Zodiac Signs
Friday Food Finds: Snickers & Twix Milk, Sake-To-Go, New Ben & Jerry’s, and More!
Don’t impulse shop. Use a system to buy the right stuff for you.
Facebook
Twitter
Pinterest
Print
Previous articleWe found the ultimate way to make your abs work harder during any at-home workout
Next article6 creative ways to get your heart rate up if you’re a cardio hater
- Advertisment -