America thrived by choking its rivers with dams. Now it’s time to undo the damage.

Lowly slime molds are helping us map out the cosmos

Simulations and observations suggest that if you zoom out enough, the universe looks something like this. (Volker Springel/Max Planck Institute For Astrophysics/SPL/)

Slime molds don’t think, but they can calculate. The single-celled organisms fend for themselves during times of plenty, but when the going gets tough they band together into a collective creature displaying exploration, learning, and memory in its hunt for food—not bad for creatures without brains or nervous systems. One variety in particular, Physarum polycephalum, has become a darling of researchers in many fields, who’ve harnessed its pioneering nature to analyze everything from ancient roads to modern shoppers. Now, astronomers have designed a digital version of the organism to study the cosmos itself.

“Not only are they not animals or plants, they aren’t even fungi. They’re protists, a simpler form of life,” says Joseph Burchett, an astronomer at the University of California, Santa Cruz, and co-author of the new slime mold-inspired study.

And an algorithm based on those simple life forms seems to have succeeded where other computer simulations fall short. It has predicted the precise form of the intricate web of largely invisible matter strands that astrophysicists believe spans the entire universe, according to research published recently in The Astrophysical Journal Letters. Previous observations have likely caught narrow glimpses of this elusive structure, and some galaxies appear to trace out obvious filaments, but this computer model has, with insight from the slime mold, tied together all available evidence into a unified map of our local cosmic web for the first time, Burchett says. He expects the simulation will guide astronomers like himself as they seek to understand how galaxies evolve and why some eventually die.

Every star you can see with the naked eye resides in our galaxy, the Milky Way, but that’s just a tiny sliver of what’s out there. Galaxies themselves huddle in strands, which string together to form an incomprehensibly large “cosmic web” featuring “filaments” of matter separated by vast voids of emptiness.

Getting a good look at the whole thing is hard because we’re so small in comparison (humans attempting a map like this one is something like bacteria trying to visualize the Earth, solar system, and nearby star systems). But researchers use three tricks to get a handle on the cosmic web.

First, astronomers have noticed that galaxies appear to be arranged roughly in lines, one after the other. Second, the Hubble Space Telescope has observed many distant quasars (extremely bright galaxies) beaming across intergalactic space like searchlights. And by measuring how those beams dimmed as they traveled, researchers can tell where they ran web strands (which are generally traced by neutral hydrogen) along the way. But these glimpses are narrow—Burchett calls them “pencil-beam skewers.” To get a sense of the whole web, researchers turn to a third tool: computer simulations.

These programs strive to mimic the development of the whole universe. They start from a smooth soup of particles after the Big Bang—both normal matter and the invisible “dark matter” presumed to dominate both the ancient and modern universe. Then as gravity draws both types of matter together into clumps, the universe expands, stretching those clumps into filaments of many sizes and creating the cosmic web. These models predict the overall structure, both thick and thin parts, but since they start from a random configuration, they don’t produce maps that match the real universe with, say, the Milky Way here and the Andromeda Galaxy over there. Other models built up from actual observations get the amount of web matter near galaxies correct, Burchett says, but struggle to reproduce the fine wispy filaments farther out. He wanted both.

Enter the slime mold. Burchett, who is interested in how gas streams along the cosmic web to influence star and galaxy formation, was struggling to find a model that did what he needed. When a computer scientist colleague, Oskar Elek, suggested that the slime mold-inspired artwork of German artist Sage Jenson looked suspiciously similar to the economical connections of the web, Burchett was skeptical at first. But after Elek modified the slime mold code to “feed” on galaxies scattered across a 3D space (as opposed to over a flat petri dish), the similarities were undeniable. “When he showed me the results, I was just floored,” Burchett says.

Here’s how it works: The full model sets virtual slime mold cells loose on a map of more than 37,000 real galaxies (from the Sloan Digital Sky Survey) spanning a volume nearly a billion light years by about 250 million light years, with bigger galaxies representing larger piles of food. As the organisms seek out the most efficient ways to reach the various feasts, they lay trails that, the researchers hope, trace out the real cosmic web. At first glance the model appeared to produce the right structure with filaments spanning the assumed range of sizes, but just looking plausible wasn’t enough. 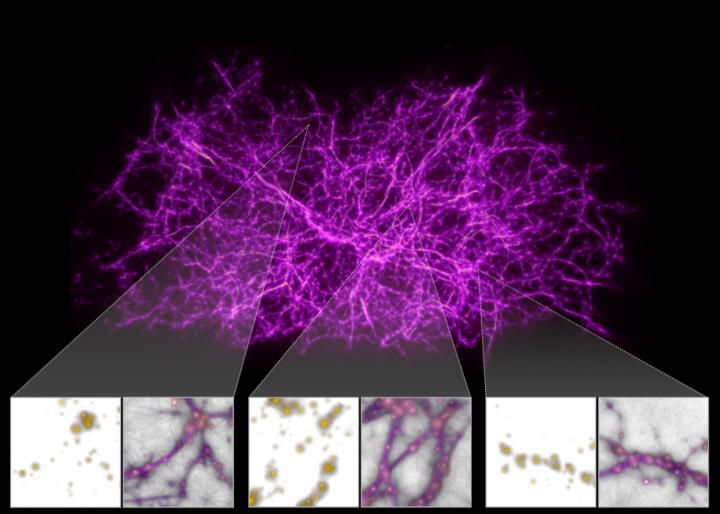 To stress test the map, they compared it with a digitally generated fake universe. They ran a traditional cosmological model forward from the Big Bang to modern day to get a full cosmic web with a realistic pattern of dark matter and galaxies. They then threw away the dark matter and fed their slime mold just the visible galaxies. After the virtual feeding frenzy subsided, the slime mold succeeded in nearly perfectly tracing the web pattern of the discarded dark matter, thick strands and wispy filaments alike, both near large galaxies and far away.

Convinced that the slime mold model knew how to find the invisible structure of the web, the team set out to tie all three lines of evidence together. They returned to their digitally generated map of the real universe, based on the real locations of visible galaxies seen by the Sloan Digital Sky Survey, and compared it with Hubble’s “pencil-beam skewer” glimpses of the web.

Where the slime mold lies thickest, however, Hubble actually spotted a drop in neutral hydrogen gas. Either the algorithm failed to detect the web at its strongest points, or it succeeded and these hotspots are harder for Hubble to see. Burchett is betting on the latter. He says that the web has grown thickest at violent cosmic crossroads, where colliding galaxies send out shockwaves and supermassive black holes spew energy into the abyss. In these areas, the chaotic activity rips hydrogen gas apart, and Hubble is blind to this detritus.

Eventually, he hopes that the slime mold map will help settle long standing controversies such as whether the cosmic web contributes to galaxy formation. To make a star you need relatively still gas for gravity to pull it together. Gas might stream too quickly in thicker strands, whizzing by instead of collecting together to form stars—so galaxies in the middle of those strands might die out relatively quickly. “This

now offers a path forward to study galaxies and their gas reservoirs from an ecosystems perspective,” Burchett says.

But more observations will be needed to verify that the map really represents what the researchers hope it does. New telescopes coming online over the next decade, such as the Simons Observatory in Chile (first light expected in 2021) or the Athena x-ray satellite (slated for launch in 2031), will help see how far the wisdom of the slime mold really extends.

Your Favorite Color: What It Says About You
Round Up Of The 15 Prettiest Almond Nails
This High-Tech Electric Gooseneck Precision Kettle Is Half Off (Today Only)
The Best Food Secrets at Summer’s Most Popular Music Festivals
Healthy versions of the most popular pies for Thanksgiving, according to Google
These are the 5 things a personal finance trainer wants you to know
The plant-*forward* approach is here to help you eat more veggies—here’s how to do it
SHOP