Razer’s flagship keyboard has clever tech under its caps 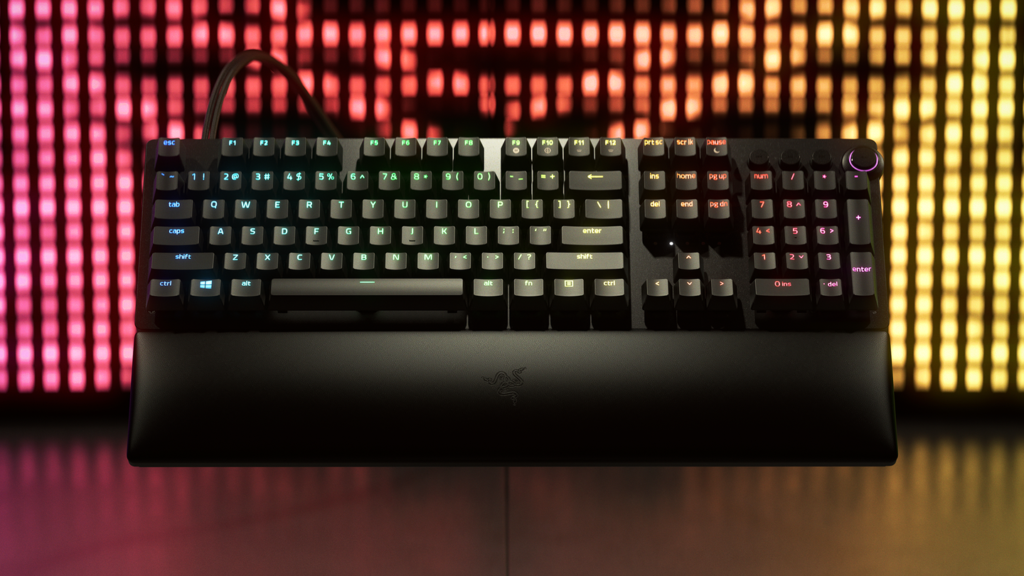 Switching from a flimsy laptop keyboard to a big mechanical one feels amazing. The keys have a luxurious amount of travel and the sound is like a Tommy gun pumping out hot lead in an old-timey gangster movie as you compose your tweets. The new Razer Huntsman V2 Analog offers those same perks when it comes to feel, but the company’s clever new optical analog switches also offer some unique advantages when it comes to gaming performance.

As the name suggests, the optical analog switches rely on light for their actions. “Digital switches only see zeroes and ones,” says Marquis Tan, a global product manager at Razer. “It’s either pressed or it’s not. An analog switch gives a more granular amount of information to the PC. Instead of zero to one, it’s zero to 255.”

The stem of each switch has a triangular opening through which light travels to an optical sensor. The farther you press down the key, the more light gets through the opening. Because the light has a constant power level, the sensor and software know exactly how far you’ve pressed.

Customizability is crucial for PC peripherals, and these switches enable lots of it in the Huntsman V2 Analog. Each key has a 3.6mm stroke, but players can set the actuation point anywhere between 1.5mm and 3.6mm on an individual basis if they want. This comes in handy for players who may want to keep their movement buttons as light as possible while requiring more effort to push down buttons that trigger more complex actions. Razer marketing manager Ashe Mckeague offers an example from “World of Warcraft.” They keep their movement buttons at 1.5mm for maximum sensitivity, but set ability keys much deeper in order to prevent inadvertently triggering them and possibly losing a battle.

I spent some time playing Overwatch (for work!) with this style of modified controls and did notice fewer accidental abilities and ultimates, which comes in handy for someone with clumsy fingers.

Two key presses in one

Because the keys always know how far they’re pressed, players can map two different actions to individual points along the key’s path. So, if a game requires one button press to equip a grenade and another to actually throw it, the Huntsman can accomplish both with a single keypress. When it gets to 1.5mm, it will equip the weapon, and when it gets to 3.6mm it will throw it.

PC gamers often map several actions to a single button press to create macros, but they’re not always allowed in some games, and once they’re triggered, they often can’t be stopped. With Razer’s dual-step actuation, players can stop before pressing all the way down in order to interrupt the sequence and change their strategy on the fly.

According to Tan, this kind of switch is capable of even more granular adjustments beyond the 255 levels currently enabled, but it doesn’t make sense to go beyond that right now. “There are a hundred board switches listening at once,” he explains. “If you make it more granular, the amount of information going through might be throttled. We’re pretty much maxing out USB-3 at this time.”

In addition to the new switches under the hood, Razer also revamped the caps. Instead of spray-painted 1mm-thick ABS plastic, the Huntsman V2 includes 1.3mm thick caps made of sturdier double-shot PBT. As a result, the keys will maintain their textured surface after extended use and make a more satisfying clack.

Razer puts a lot of research into tuning the feel and sound of a keyboard, but according to Tan, it’s mostly based specifically on feedback from players rather than precise measuring and tuning. “You have to try it and it involves a lot of prototyping,” he says. The company goes through dozens of prototypes during the tuning process.

Every part of the board affects the overall sound and feel. The caps are crucial, but it also requires careful testing of other variables like rigidity in the chassis, as well as tension in the springs that push the caps back up after a press. “With analog switches, you’d think you need a lot of force to control the granularity,” says Tan. “But, if it’s too heavy to press, it won’t be comfortable as a daily driver. We tested a ton of prototypes, sometimes with different springs in the same board.”

It’s not replacing a custom board

The rabbit hole of custom keyboard building goes absurdly deep and Razer knows it’s not going to replace that experience for true enthusiasts. The company has, however, embraced some of the custom market’s upgrades for its Huntsman V2 Analog.

Each key is lubed with dry lube to make the action on it feel smoother and more reliable over time. Plus, Tan says the company is experimenting with adding dedicated sound damping material inside the keyboard chassis specifically to tune the volume and quality of the sound it makes during typing.

So, how does it feel?

I’ve been using the Huntsman V2 for several weeks now and it’s an impressive keyboard that does everything in its power to justify its steep $250 price tag. The feel is excellent and, once you figure out your preferences for tuning specific keys, the customizability is extremely handy.

There are some drawbacks, however. It doesn’t offer any dedicated macro keys. Instead, it relies on the dual-step actuations for automation. So, if you’re used to mapping more than two things to a button press, you’re out of luck. Some games also don’t support the analog input for finer motor control, so you won’t enjoy the full benefits of the new switches.

One thing you’ll almost certainly appreciate, however, is the plush wrist rest that elevates your hands via a fake leather pad that feels impressively luxurious. The pad attaches to the board magnetically and even offers the flashy RGB lighting that’s present on the rest of the device.

Overall, it seems extremely worthy of the flagship spot in the Razer keyboard lineup. Just don’t expect to shell out all that cash to improve your overall gaming skills. It will, however, sound and feel great, even when you lose.

The post Razer’s flagship keyboard has clever tech under its caps appeared first on Popular Science.