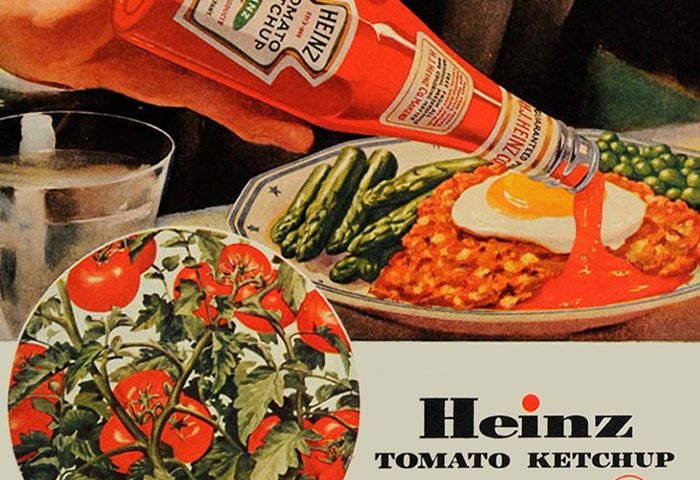 When it comes to those most American of condiments—ketchup and mustard—which reigns supreme?

You know ‘em, and moreover, love ‘em, those iconic food pairings like peanut butter and jelly, mac and cheese, or pickles and ice cream. While it’s hard to say who first put ketchup and mustard on the same dog or burger, we can trace their individual histories and see that both rose to icon status in the U.S. early in the 20th century, and thus was only a matter of time before the dynamic duo found each other in a smearable love story for the ages.

But it’s 2019, and in the spirit of winners and losers and nothing in between, we’re pitting ketchup (or ‘catsup,’ if you’re fancy) against mustard (or ‘moutarde,’ if you’re French), in the sauciest of summer showdowns. Game on!

Ketchup, the self-proclaimed “king of condiments” is derived from a Hokkien Chinese word, kê-tsiap, that is traced back as far as the 17th century. Original versions would be virtually unrecognizable, comprised mainly of mushrooms along with flavoring agents like fermented fish, oysters, and even walnuts. It wasn’t until 1812 when tomatoes were introduced. Mixed with brandy, spices, and preservatives like sodium benzoate, ketchup’s popularity spiked in part for its (comparatively) long shelf life and as a means for preserving tomatoes.

Pittsburgh ketchup-maker Henry Heinz reinvented the sauce in the early 1900s using pectin-rich ripe tomatoes and vinegar as natural preservatives (instead of increasingly unpopular chemicals) and ketchup began to enjoy a full-on frenzy. As Heinz perfected his sauce, complicated and unnecessary home recipes began to vanish from cookbooks and Heinz would come to dominate the condiment category. These days a bottle can be found in roughly 97 percent of American households and nearly every restaurant the world over.

Mustard’s journey starts long before ketchup’s but ends in a somewhat similar place. Now a multi-billion dollar market, modern mustard first emerged in Europe in the sixth century B.C.E. and mustard seeds have been found even further back in fossils, traced to the Mesopotamian empire (Middle East) circa 3000 B.C.E. and in catacombs of Egyptian Pharaohs. Both Greeks and Romans ate a version of prepared mustard mixing mustard seeds with grape must and spices, and finally jotted down an official recipe in 42 A.D.

Around the 10th century, mustard had made its way to the English and French countrysides and, over the next several centuries, several versions would emerge, including an especially popular variety made with white wine in the small French village of Dijon by Maurice Grey and his financier, Auguste Poupon.

As big a hit as it was overseas, mustard didn’t find its footing in the U.S. until Robert French (R.T. French Company) introduced a mild yellow version as a hot dog condiment during the St. Louis World’s Fair (1904). 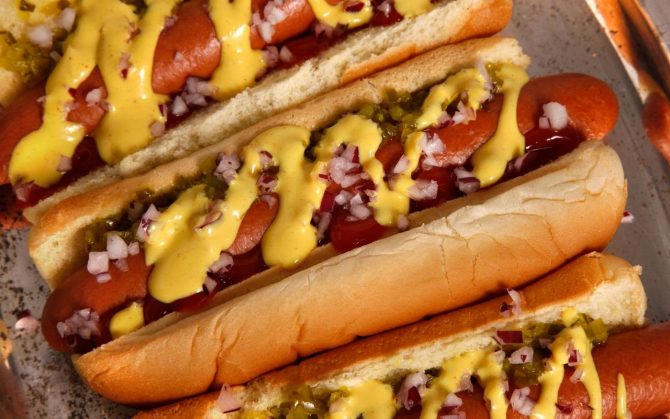 French’s yellow mustard would enjoy dominance until 1981 when Grey Poupon capitalized on the luxury-obsessed era with their “Pardon Me” ad campaign, featuring Gordon Gekko-esque businessmen eating it with steak in the back of Rolls Royces. Though it’s never overtaken yellow mustard, versatile Dijon and spicy English earned adoration both as a condiment and as a base for salad dressings, sauces, and marinades.

While an informal poll done on Facebook (by me) saw mustard edge out ketchup 23-20, mustard sales were just $433 million in 2017 compared to ketchup’s staggering $765 million (statista.com). French’s is still the top-selling mustard brand, claiming a third of the U.S. market with Grey Poupon rolling in at roughly 15 percent and private labels rounding out the rest. Heinz dominates all challengers, yellow or red, with Hunts a distant second in the ketchup category. And while mustard seed is second only to peppercorns as far as spices, ketchup is literally freaking everywhere. Check your desk drawer, there’s a packet in there, I promise. 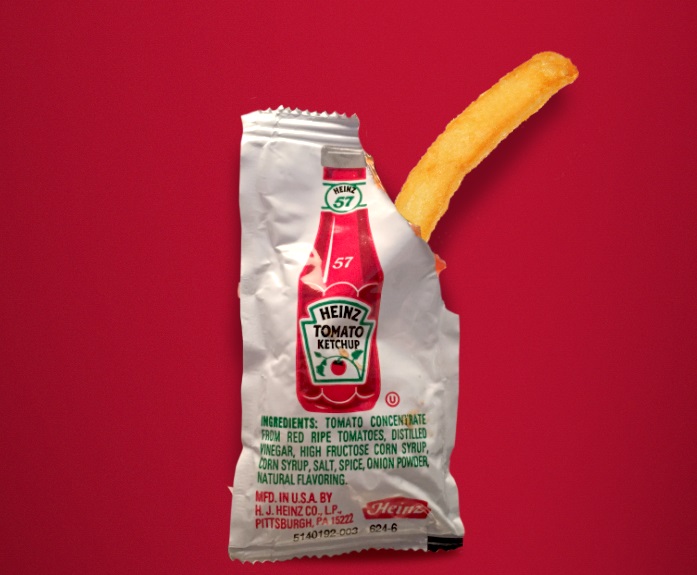 Pope John Paul XXIII allegedly loved mustard so much that in the early 1300s, he created a position in the Vatican called Grand Moutardier du Pape, or “Mustard Maker to the Pope.” Others like Queen Victoria followed suit and, in 1866, appointed Jeremiah Colman, founder of Colman’s Mustard of England, her official “mustard maker.”

Ketchup has some political pull of its own. Thomas Jefferson’s cousin, Mary Randolph, was apparently such a fan she included a recipe in her influential 19th-century cookbook, “The Virginia Housewife.” And who could forget the 2004 election when ketchup heiress Teresa Heinz Kerry, wife of Dem nominee John Kerry, was just a measly 19 electoral votes from the White House. 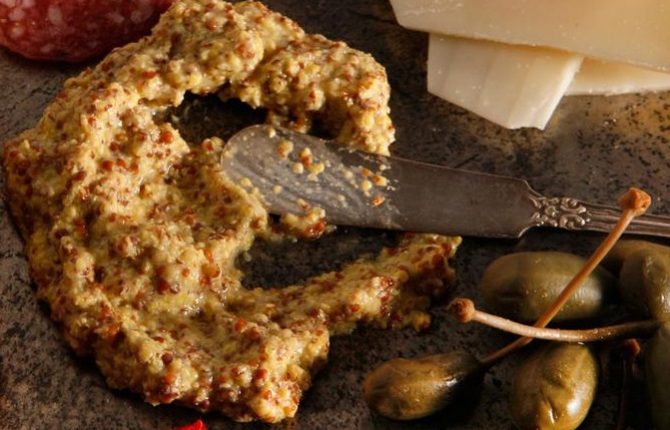 What would our modern world be without those “take it too far” people? Former Wisconsin Attorney General Barry Levenson operates the National Mustard Museum in Middleton, where he houses his collection of over 5,000 mustards from more than 60 countries, along with loads of mustardy memorabilia. He apparently loves the condiment so much that he shaves with it, much to the horror of his undoubtedly exhausted wife.

Not to be outdone, Ralph Finch of Farmington Hills, Mich. has become America’s most prolific ketchup collector and blames “having to mask his mother’s terrible cooking” for the lifelong obsession. His collection, however, clocks in at a paltry few hundred bottles plus memorabilia, but fear not: Finch recently cashed in a life insurance policy early to expand the collection in a valiant attempt to catsup to Levenson. 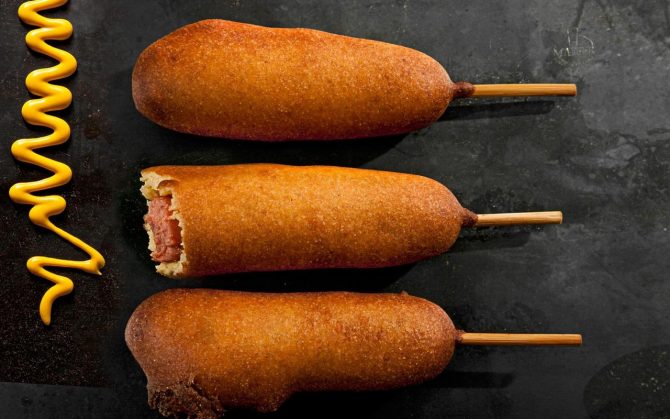 Related Reading: Why Does Ketchup on a Hot Dog Piss People Off?

This is a tricky one, as taste is decidedly subjective. Most culinary-minded folks might cast their ballots for mustard, citing complexity of flavor, range of haute options, and French association, but consider this 2004 New Yorker article, “The Ketchup Conundrum,” where Malcolm Gladwell uncovers that ketchup, specifically Heinz, is the rare food with extremely high “amplitude;” a word sensory experts use to describe flavors that are well-blended and balanced and “bloom” in the mouth. It’s a logical reason that other brands, large and small, struggle to make a dent in Heinz’s market share, and while mustard offers far more interesting and tasty versions of itself, good ketchup delivers “sweet, sour, salty, bitter, and umami flavors, harmoniously and all at once.” Let’s call it a draw.

Save for Grey Poupon with its iconic ‘80s ad campaign and subsequent hip hop obsession, both have remained relatively tame when it comes to big sweeping cultural references.

Ketchup is the most accessible and affordable form of fake blood for amateur filmmakers and pranksters in a pinch, while lethal wartime agent “Mustard Gas” (not actually mustard, but named for its similar smell) gained infamy in World Wars I and II.

“Put some mustard on it”—the most popular of mustard-related idioms—means to add some energy or speed to something, while “it’s like putting ketchup on a steak” means you’re ruining something good by adding a lesser (in this case, ketchup) element. Kind of rude. 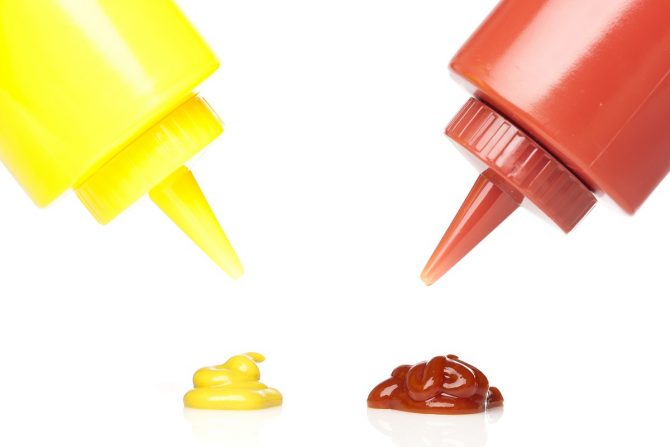 Mustard is the clear winner here, known to bring relief for a myriad of ailments including joint pain, skin problems, and even poor respiratory health. It also clocks in at just five calories per serving (give or take) while ketchup, containing sugar and roughly 20 calories per serving, claims very few health benefits.

Another clear decisive win for mustard, which can be found in some of our favorite salad dressings, sauces, and comes in everything from sweet and sassy honey mustards to deep, dark and spicy browns. Ketchup has made its way into various sauces and recipes like meatloaf and, in Spain, they mix it with mayo, creating a heavenly dip. But its destiny seems to be cemented simply as the world’s most popular standalone condiment. Certainly nothing to shake a hot dog at. 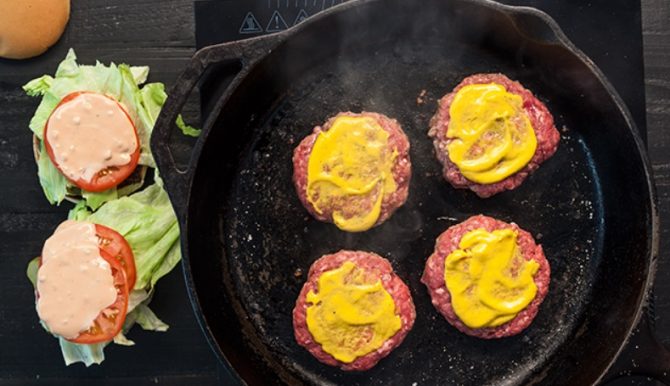 With the major players sticking to a fairly traditional social playbook, save for this incredible and likely fake Hunts account, Heinz crushes all with over 41,000 followers on Twitter and 137,000 on Instagram. Grey Poupon, with just over 1,000 followers, follows exactly zero other accounts back and, to date, has only ever liked two other tweets. Somehow the most French thing ever.

French’s Mustard, on the other hand, will be damned if anyone thinks the brand itself, which was simple-founded by a guy named Bob French, is actually French and uses its borderline Franco-phobic banner photo to dissuade the Twittersphere of any such notion. Relax, you guys. 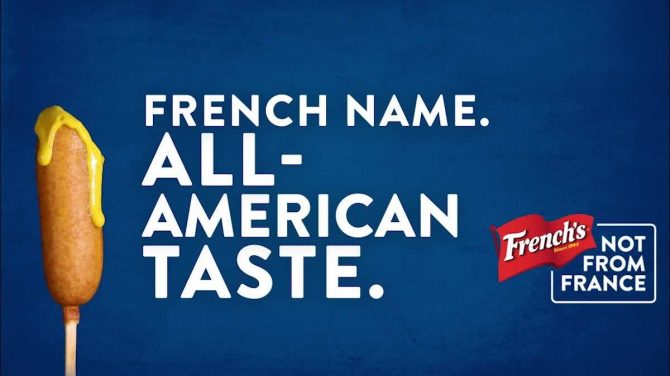 And finally, in July 2018, Heinz tried to capitalize on the misfortune of baseball fan Bill Baffes, who landed a glob of yellow mustard roughly the size of Delaware on his left cheek and was (obviously) caught on camera. Heinz (who also makes yellow mustard) pounced on Baffes’ gaffe, offering him season tickets to the ballpark if their tweet hit 10,000 likes. It did, but in a dark twist, Baffes, who coincidentally owns a small grocery store on the south side of Chicago, saw an opportunity to snag a little buzz of his own and launched a promotion giving away free bottles of, wait for it….French’s yellow mustard.

You can’t make this stuff up, and even if you could…would you want to? 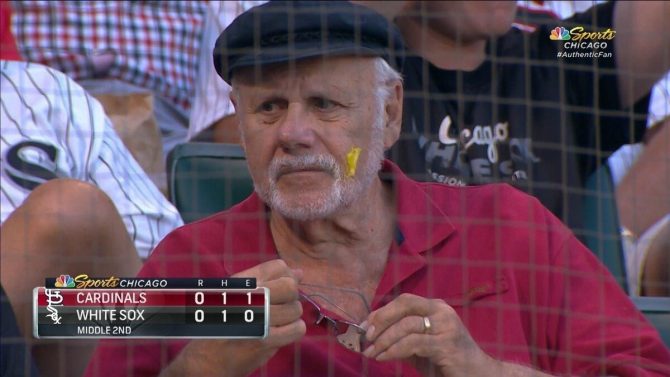 What’s the Difference Between Catsup and Ketchup?

How Did Nathan’s Become the Most Famous Hot Dog Brand in America?