Look inside Ford’s Mustang Mach-E 1400 demo car and you’ll find a total of seven motors. Three sit in the front, while four reside in the back, all of which are connected to a single driveshaft, allowing them to combine for a ridiculous total of 1,400 peak horsepower.

The Mach-E 1400 will never go into production, but Ford is using it as a demonstrator to brag about its $11.5 billion commitment to the electric vehicle space over the next several years. According to Ford, this one-off car will act as a “testing ground” for new technology and materials as they’re developed.

Right now, the Mach-E 1400 is the first Ford vehicle to test out a material made of “organic composite fibers” made of flax in its hood. The company claims it’s an even lighter alternative to the carbon fiber that composes the rest of the vehicle’s body.

While a little bit of weight saving is nice, the real source of the Mustang’s speed is pure power mixed with performance tweaking. It can evenly spread out the power to all four wheels, or send all of it exclusively to the front or back wheels depending on your desired application. In drift mode, for instance, techs can actually remove the front drive shaft to increase the turning angle on the front wheels to make it easier to steer during a drift. It also has a hydraulic handbrake system to help kick the rear end out into a slide. 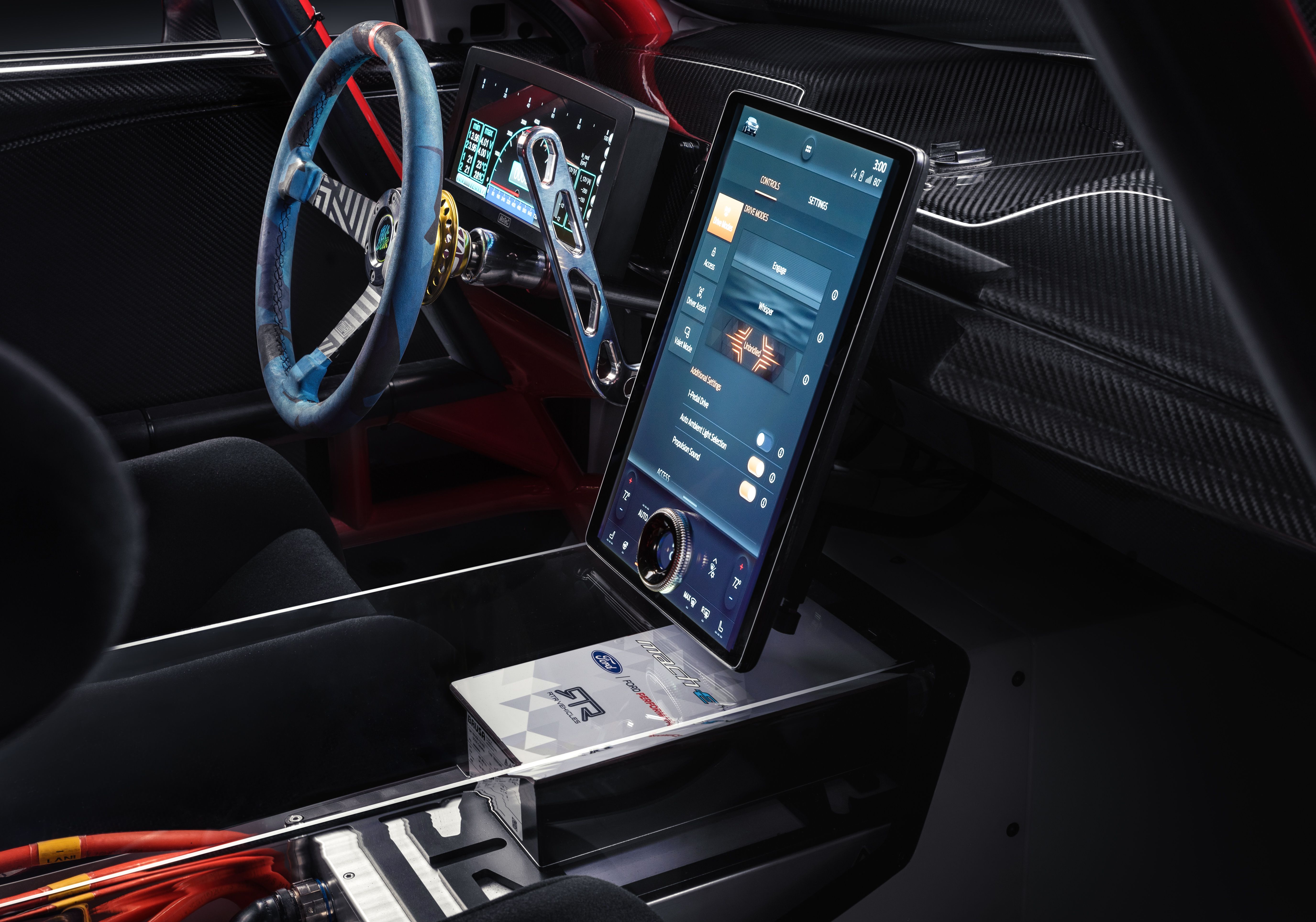 All electric cars must have giant screens. It’s the rule. Also note the handbrake lever next to the steering wheel. (Ford /)

Ford doesn’t offer a top speed for the E-1400, but it’s certainly high. The company’s own hype video shows it hanging tight with a NASCAR whip in the straightaways. With 1,400 total horsepower, the challenge is getting all of that oomph to the ground to propel the car forward. The Mach-E 1400 employs some impressive aerodynamics to help press it downward. A giant carbon wing and air channels pull the car toward the earth for a total of 2,300 pounds of downforce when the car’s traveling at 160 mph. It’s good for traction, but hard on the tire budget.

This much power in electric motors can also be hard on the ears, but Ford has tried to accommodate drivers who don’t appreciate the high-pitched whine—you could probably even call it a scream—that comes from the electric drivetrain. A burly loudspeaker set in the front of the car can blast a customizable car sound out into the world as it shreds.

The spoiler provides ample downforce to transfer power to the ground. (Ford /)

A 56.8-kilowatter-hour battery provides the juice for the whole package. It’s not massive in size or capacity, but it is tuned for a high discharge rate in order to dish out as much power as possible when you jam on the gas. As a result, it’s not meant for long trips, especially if you’re going hard on the throttle. Give it a couple laps around the track and it will be time for a cool down and recharge.

This kind of cockpit looks a little odd without a clutch pedal. (Ford /)

While we’ll never get to drive the Mustang Mach-E 1400, demos like this really do help to hammer home just what’s possible with electric drivetrains. And they’re only getting more efficient and more powerful. After all, it takes a lot of tinkering to make a four-seat sedan with this kind of monstrous performance on the track.