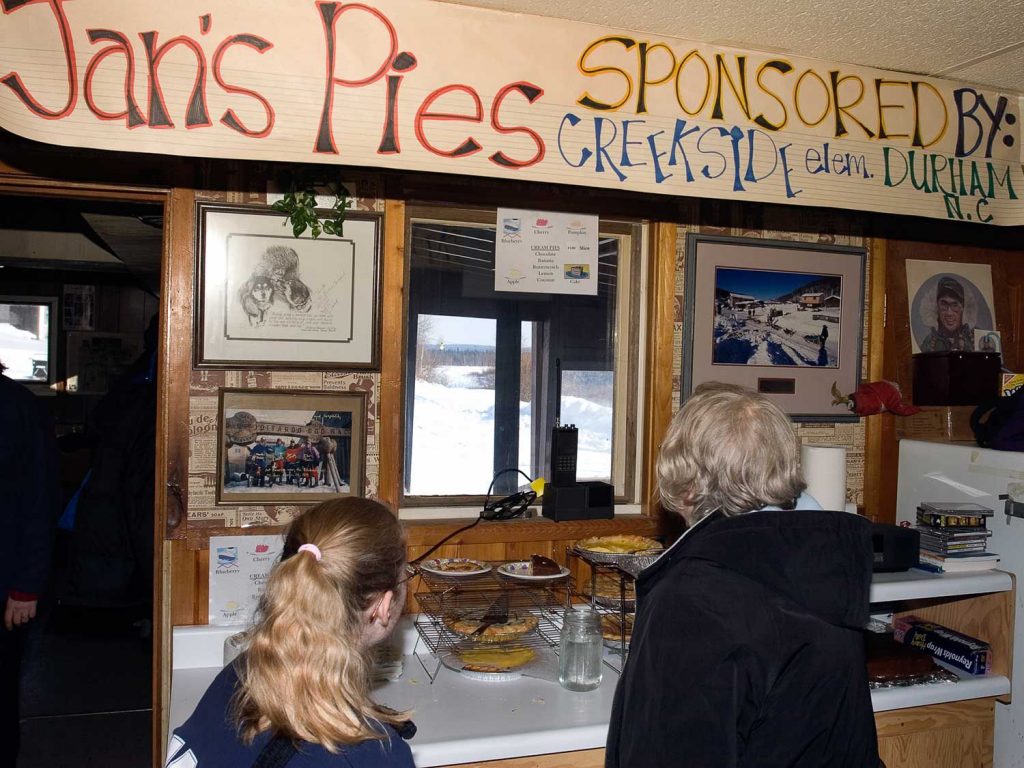 It all began back in the 1970s when Jan Newton, who ran a local restaurant, began cooking for mushers coming through town. (Jeff Schultz/SchulltzPhoto.com /)

This story originally featured on Saveur.

In the shadow of Alaska’s Kuskokwim Mountains, nestled in a valley along the banks of a winding river, there’s a town called Takotna with a population of a mere 49 hearty souls. Each March, this cozy hamlet doubles its numbers as mushers racing the Iditarod Trail come here for their mandatory 24-hour rest. On a course that traverses just under a thousand brutally cold and snowy miles from Anchorage to Nome, the racers and their dog teams have gone about a third of their journey when they reach Takotna. So what makes this place their stopover of choice? Pies.

Weeks before the competitors set off from Anchorage, the folks here start preparing for what is without question their biggest event of the year. The whole town chips in to help, including the kids, who end up developing their baking chops at an early age. The exhausted and hungry mushers are greeted with pastry-based delights of all kinds—apple, cherry, pumpkin, lemon meringue, banana cream—as well as plenty of other stomach-warming, race-fueling fare, cooked around the clock by enthusiastic locals. As local Barney Anselment puts it, “It’s basically our Super Bowl.” 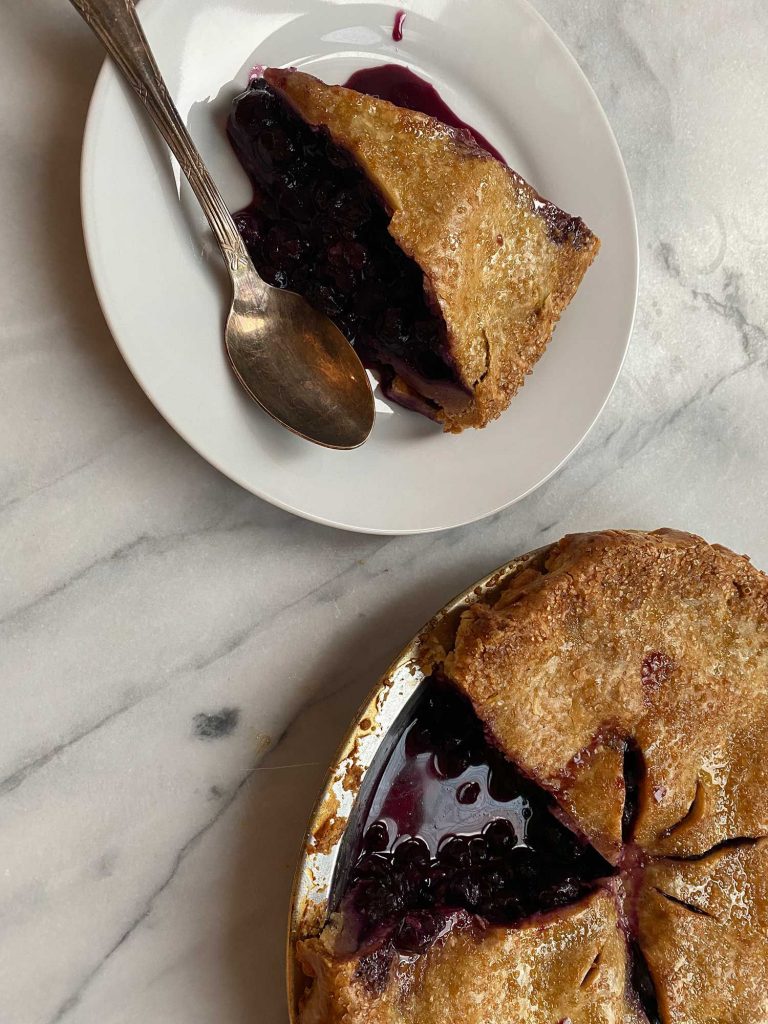 The place has gained a reputation for its dessert-laden hospitality. “The first year I ran the Iditarod, Jeff King, a four-time champion, told me I had to stop in Takotna because they had good steaks—and pie!” says Kristin Bacon, who has participated in the race three times. “How can you turn that down?”

Mushers have long since come to expect the famous pies. One year, a racer even had pecans shipped to the town with a special request that someone prepare his favorite. The physicality of the race dictates that this is a moment for indulgence. As Bacon puts it, “It’s a time in your life when you can pretty much eat whatever you want.”

The town initially garnered popularity as a checkpoint along the course back in the 1970s, when Jan Newton, who had run a restaurant in Idaho, moved to Takotna with her husband. Newton began making meals for the mushers passing through, and her hearty cooking got the racers’ attention. Though she prepared everything from moose steaks to chili, the woman later dubbed “Queen of Takotna” by proud residents became especially renowned for the double-crusted fruit pies, hearty pumpkin pies, and delicate cream pies that she dished up as the weary participants rolled into town.

Today, checkpoint coordinator Nell Huffman, who works at the Takotna Community Association and has been a resident of the town for the last 34 years, has taken up the mantle of pie coordinator and greeter-in-chief. (Newton passed away in 2012.) “We see these people when they come in, and they have no energy left,” she explains. “We just want to help them.” It’s a family affair, with Huffman’s five children pitching in over the years; last year, her adult daughter, Tabatha, helped to care for the dogs outside. Every resident does their part to make the mushers’ stay the best it can possibly be. During the racers’ stopover, the teenagers in the town keep the fire barrels lit where people are gathered. One year, a kid really went above and beyond, helping to track down a racer’s missing false teeth. It’s for good reason that Takotna’s hospitable reputation looms large. 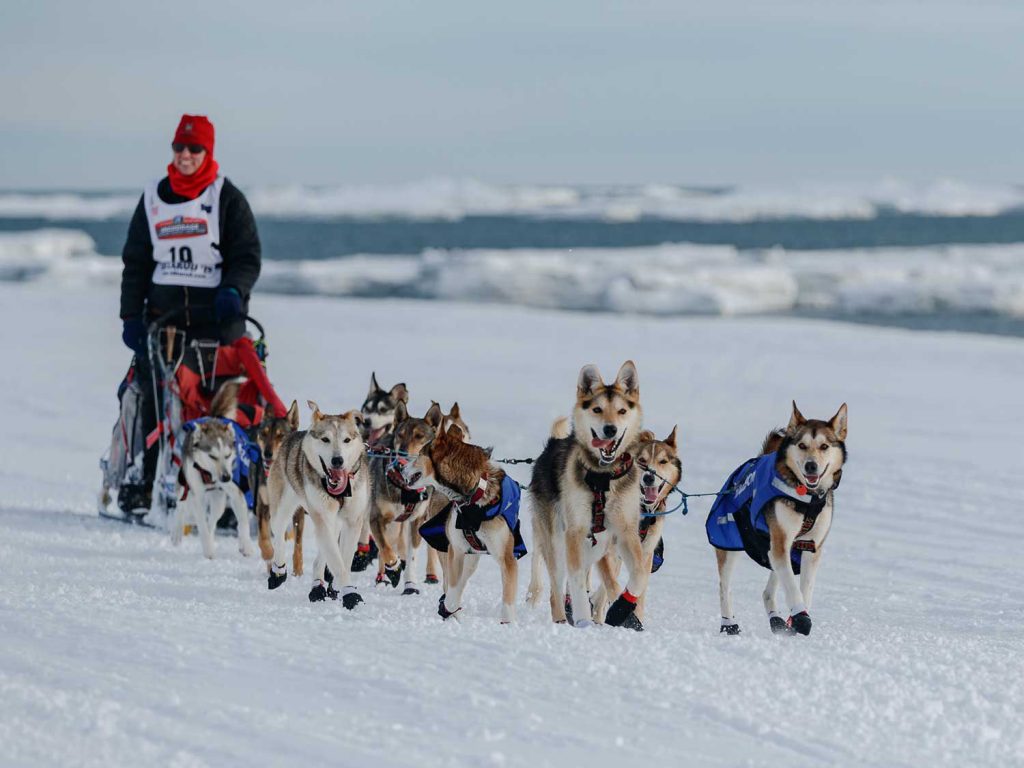 The whole town chips in to help make the mushers as comfortable as possible during their mandatory 24-hour rest. (Jeff Schultz/SchulltzPhoto.com/)

This year’s race is set to begin on March 7th, and the citizens of Takotna will once again be ready. When asked why the town goes to such great lengths to host the Iditarod teams each year—with pies, and so much more—Huffman answers without hesitation:

In Alaska, wild blueberries (also called Kyani berries) are picked in the summer and frozen for use during the winter, especially in pies.
Yield: Makes one 9-inch Pie
Time:

If you’re shopping for CBD supplements, here’s what to look for
A Three-Ingredient Thai Secret to the Best Meat You’ll Ever Eat
Now is the perfect cosmic time to double down and go into full slay mode
5 Foods That Will Soothe Headaches
The Difference Between Good & Great Chicken Lies in This Spice Mix
What Your Clothes Say About You
How to Throw a Mexican Street Food-Inspired Cinco de Mayo Fiesta
SHOP