Your Self-Care Checklist: Stay Healthy In All Parts of Your Life

Dirty Dozen List: Are You Eating the Most Pesticide-Laden Produce?

Soup’s on. ( Becca Tapert via Unsplash/)

Every kitchen should have a dutch oven. Primarily used for slow-cooked foods like stews, soups, and braised meats, these large cast-iron pots are handy when whipping up nearly any type of meal. Whether you’re deep-frying chicken, baking bread, or boiling pasta, a dutch oven will make your life easier with its size and even distribution of heat. Not only are dutch ovens versatile, but they are durable and easy on the eyes. That’s right: beauty and brawn! Available in bare cast iron or colorful enamel, dutch ovens have been the aesthetic and functional centerpieces of kitchens worldwide. To get you started on your search, here are some of our favorite dutch ovens on the market today. 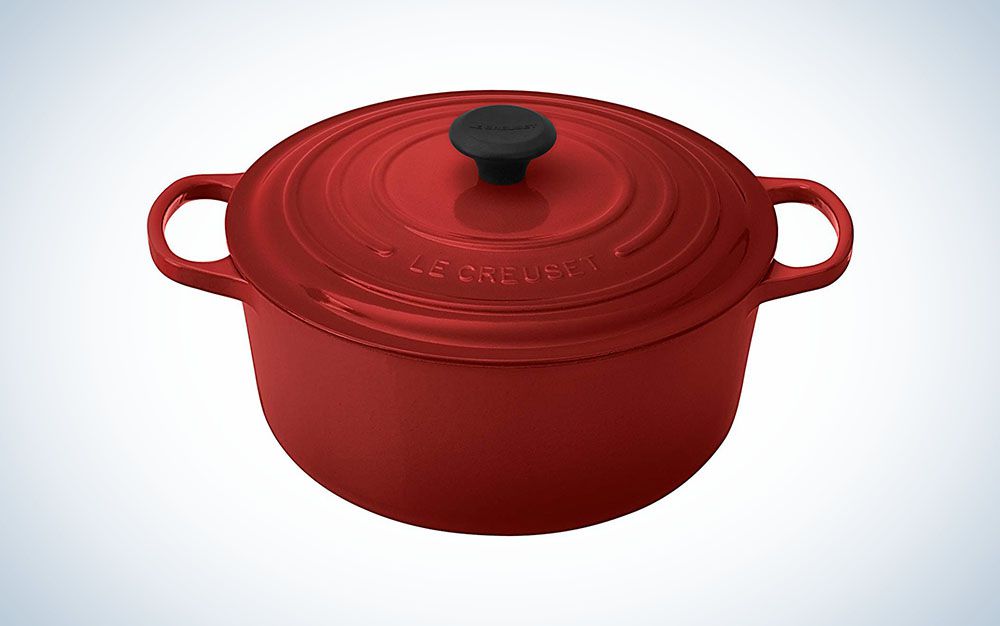 The mark of a serious chef. (Amazon/)

Having a Le Creuset in your kitchen is both a status symbol and a silent indicator to visitors that you take your cooking seriously. Since its first round of pots fired in 1925, Le Crueset has become the most well-trusted enameled dutch oven brand for their consistency, heat distribution, and durability. This is a 7.25-quart dutch oven with a soft knob on the lid that can withstand temperatures of 500 degrees. The side handles are also large and easy to grip with oven mitts. The sand-colored enamel interior is dense enough to withstand high-acid marinades for raw foods and extreme temperatures alike. The Le Creuset is also the lightest weight dutch oven per quart, which helps when cooking in large quantities. The cherry on top is that these ovens are exquisitely designed with both loud and subtle color options. 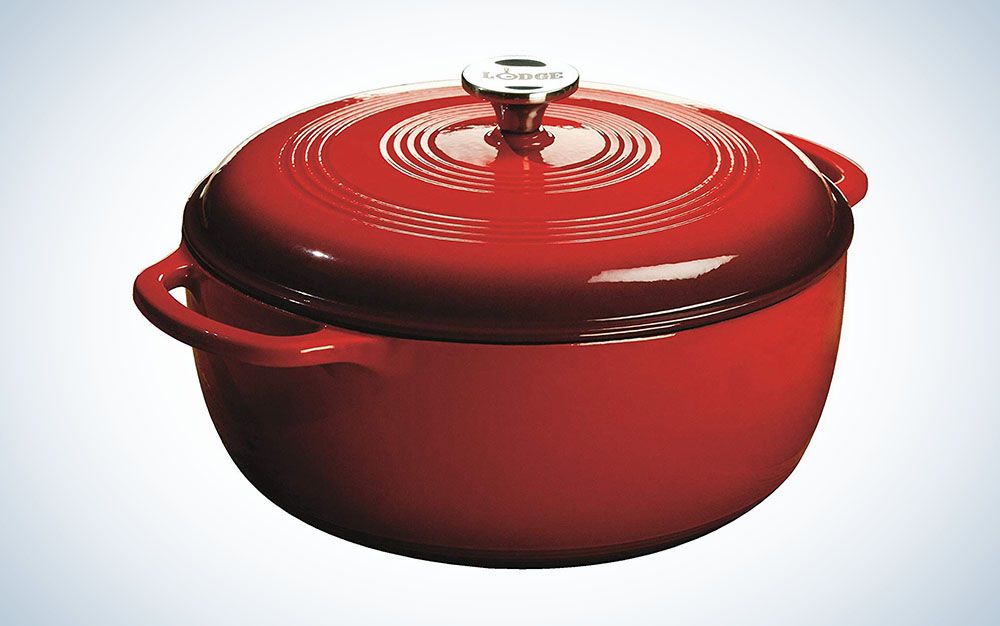 Lodge is the pot-maker for the people, and they’ve been at it for more than a century. This is an enameled cast iron dutch oven that’s significantly less expensive than much of its competition, without compromising quality. The large handles and a heat-tolerant porcelain enamel interior make this a welcome pot in any kitchen. Simmer, braise, bake, and roast up to 500 degrees. 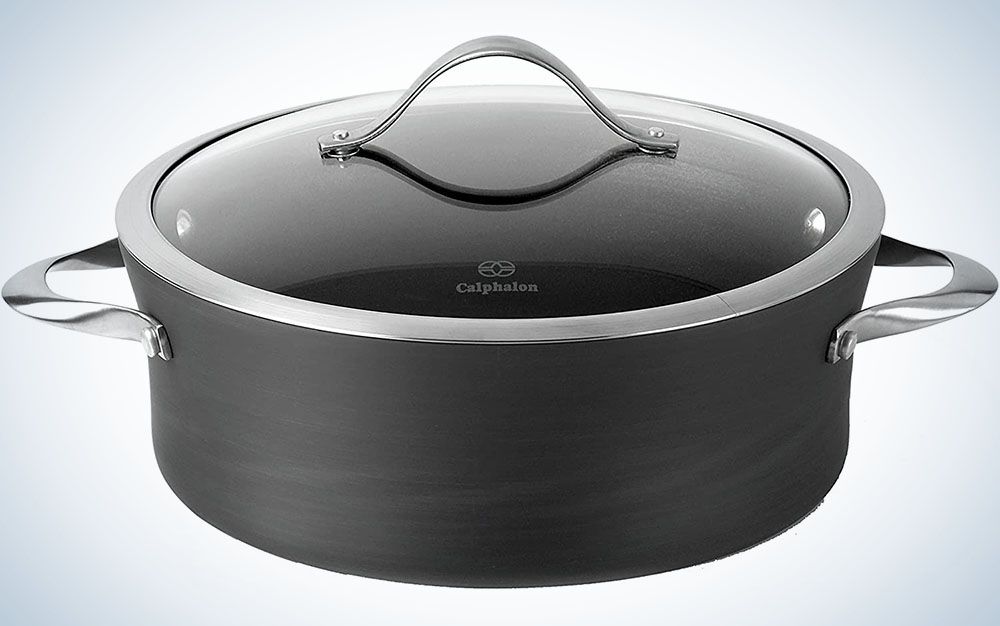 This Calphalon’s anodized aluminum body is dishwasher safe and extremely difficult to chip. It is nonstick, allowing you to cook with less oil than you would need with other dutch ovens. The Calphalon and its lids can withstand temperatures of 450 degrees in the oven. It is not traditional cast iron but is perhaps the most modern option on the market.

Perfect for braising and roasting. (Amazon/)

Here’s another great product from Lodge. This 5-quart cast iron dutch oven is pre-seasoned, and the seasoning will mature with each use if cleaned correctly. Seasoned cast iron is especially awesome for cooking meats, as the meat and pot will have a symbiotic flavor exchange. The meat gets flavor from the pot, and the pot retains the flavor of the meat. Whatever type of food is your fancy, this workhorse of a pot can be used to braise, simmer, fry, and sear. Foods will stick more than they would in an enameled pot, but this is a positive thing for searing, and you can always counteract sticking with butter or oil.

This 6-quart cast iron pot comes with legs on the base and a hangable handle that make it great for camping since you can hang or stand it over an open fire. The handle also makes it easy to move around the home kitchen. Perhaps the coolest thing about this pot is that its lid doubles as a cast-iron skillet for quick sautees and sears. It is pre-seasoned and high-quality bare cast iron despite its low price. It also has an attractive design and definitive Little House on the Prairie vibes.

7 CHINJABI Dishes That Always Satisfy Us (Chinese + Punjabi)
Cafe at the Swedish Church of New York in New York, New York
With Up to 61% Off Coffee Makers, It’s Prime Time to Buy Your Dream Machine
9 delicious, plant-based lunches you can make in 10 minutes or less
North American bats tend to roost among the fungus that kills them
The healthy reasons why quinoa continues to reign supreme in grain bowls everywhere
Here’s what a healthy plate really looks like when you’re doing Whole30
SHOP