Essential supplies for grooming your cat

What the 1918 flu pandemic can teach us about COVID-19, in four charts 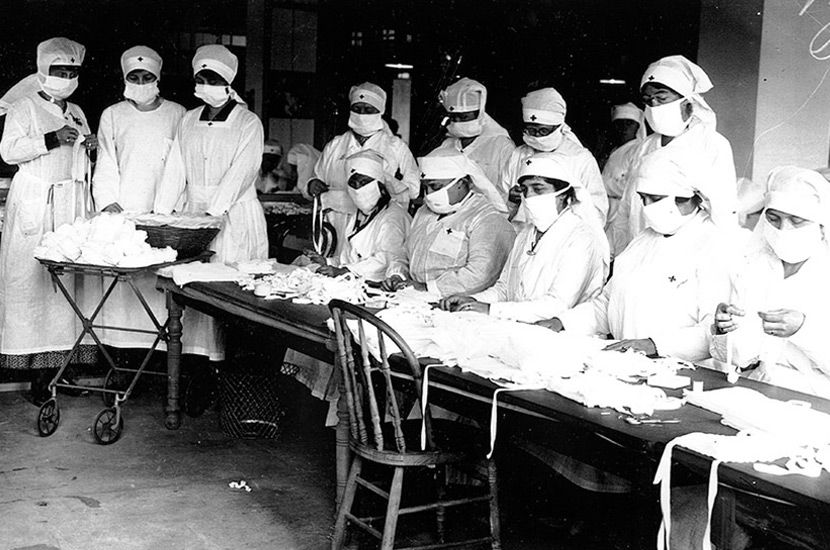 Red Cross volunteers in Massachusetts, who were called in to help with health care worker shortages during the 1918 flu pandemic (CDC/)

Follow all of PopSci’s COVID-19 coverage here, including travel advice, pregnancy concerns, and the latest findings on the virus itself.

The 1918 influenza pandemic was just long enough ago that it has slipped out of the collective consciousness. But as the novel coronavirus, COVID-19, spreads, more and more experts are turning to last century’s flu for clues on how to deal with a public health crisis of such massive proportions.

In some ways, an early 20th century event doesn’t provide a great analogue to how a modern disease might evolve. 100 years ago we didn’t have widespread air travel, nor did we have antibiotics, which can’t treat a virus but can help with the infections that often accompany respiratory diseases (and cause many of the deaths in a viral outbreak). 100 years ago, we didn’t even know what viruses were.

But one aspect of pandemics remains even a century later: non-pharmaceutical interventions. That’s the technical term for the non-medical precautions that governments and other organizations put in place to prevent the spread of an illness—in other words, social distancing measures. Closing schools and museums would be one non-pharmaceutical intervention. Implementing quarantines is another. And by looking at how the 1918 influenza progressed in various cities, we can see how the interventions they each took impacted the spread of the virus.

One classic example is the distinction between Philadelphia and St. Louis, as conveyed in a PNAS paper from 2007. 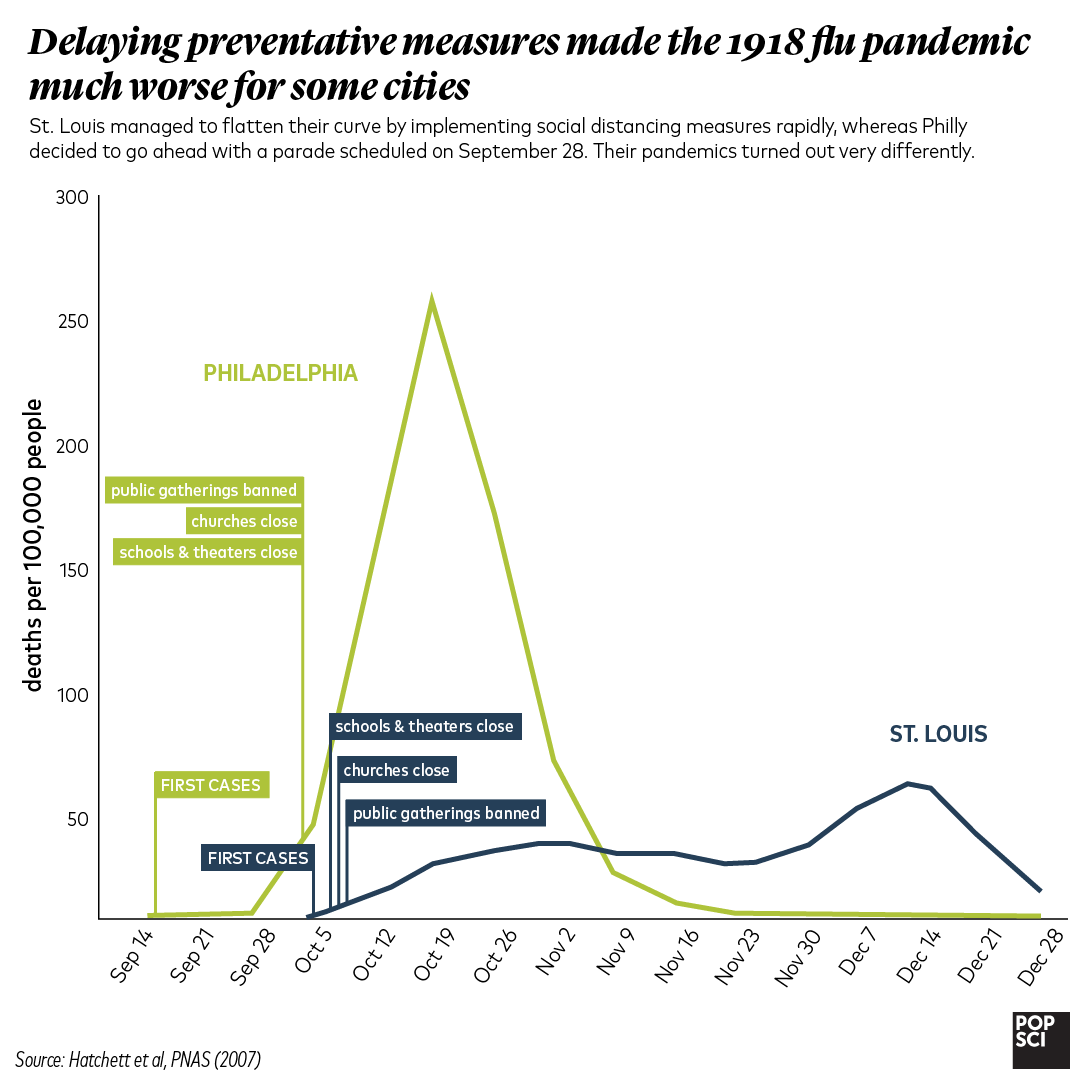 We can all learn from St. Louis (Infographic by Sara Chodosh/)

On September 28, the flu had already been spreading across Philadelphia for at least 10 days—but the city went ahead with its Liberty Loan war-bonds parade anyway, in which roughly 200,000 people lined Broad Street. Cases took off just a few days later, and by the time the city took measures to fight back on October 3 it was already too late. Philly ended up with one of the deadliest flu outbreaks in any major American city.

St. Louis, in contrast, saw its first cases on October 5 and shut down most of the city two days later. In doing so they seem to have spared their citizens the worst of the disease.

This is an excellent case example, but of course it’s just one. To figure out whether that trend holds up, another research group looked across 43 cities in the continental US to examine whether early social distancing measures actually helped. And in a case of science confirming what is perhaps obvious based on common sense, they found that, yes, unequivocally, taking early precautionary interventions did help cities reduce deaths.

The peak death rate tended to be lower in places that acted early, whereas those that waited a week or more saw higher spikes. Of course, the data aren’t perfect—St. Paul, MN and Grand Rapids, MI both had very low peak death rates despite waiting weeks to implement any measures. Conversely, New York City started shutting down more than a week before the virus hit, yet still had a moderate spike in deaths. That’s perhaps no surprise given how densely packed NYC is compared to other American cities, and it could have been much worse.

But despite these anomalies, the trend still held: taking early action prevented deaths. 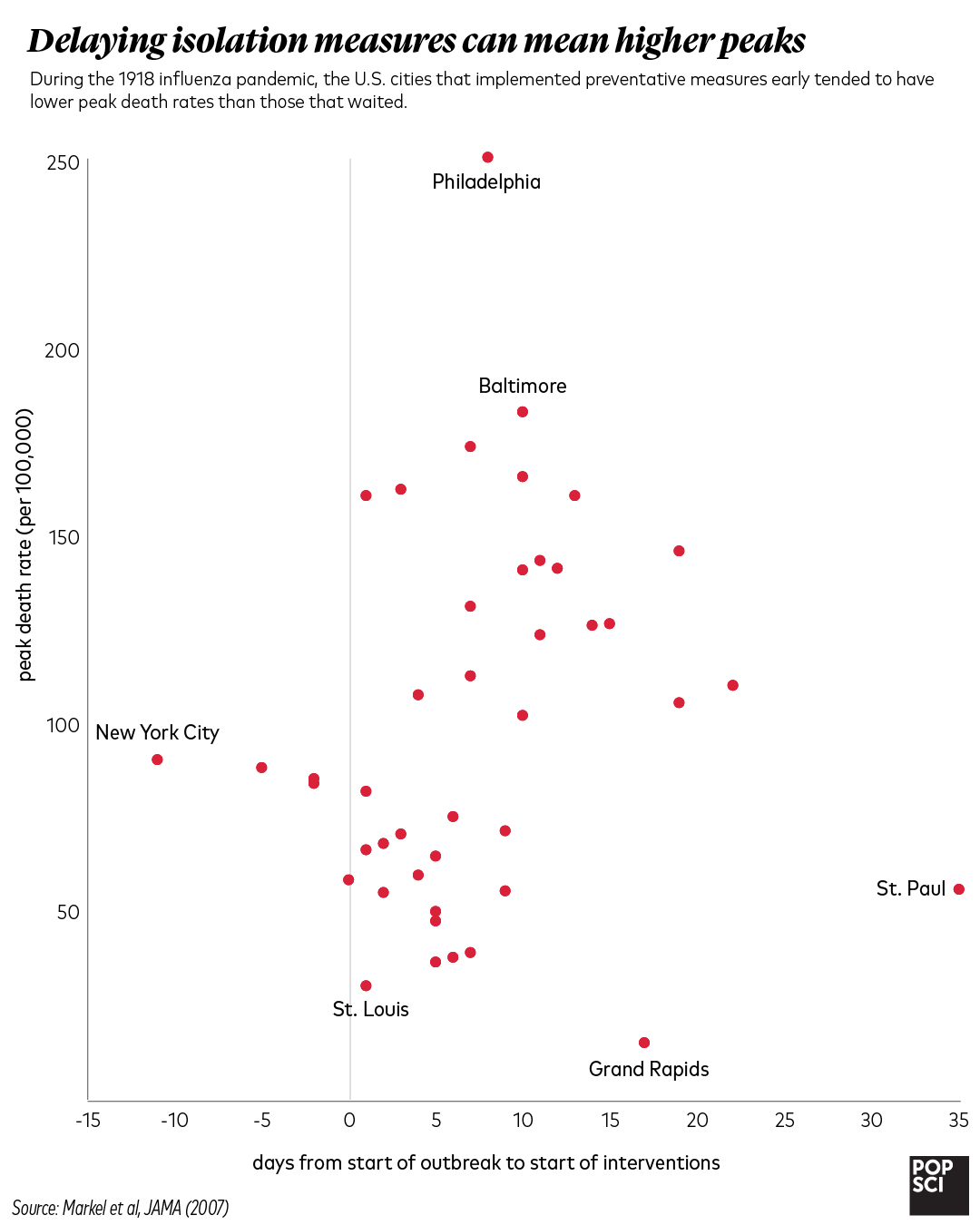 Similarly, the earlier cities acted, the lower their total death counts were in general. Keeping peaks low likely kept health care systems from getting totally overwhelmed, and therefore enabled them to provide better care to each patient. The situation right now in Italy (and previously in China) exemplifies how quickly even a good system can get overrun, forcing health care providers to make tough decisions about who gets care and who doesn’t. A shortage of ventilators meant that patients who needed help breathing simply couldn’t get it. And in the US we’re likely to face even worse. An estimate from Johns Hopkins University stated that we’d likely need 740,000 ventilators to care for patients in a pandemic like the 1918 flu. We currently have 160,000, plus nearly another 9,000 in stockpile—not nearly enough to cover everyone.

We’re heading into tough times, in which we’ll have to make difficult decisions. The least we can do is try to learn from our past while we still have time to act.

But the timing of early interventions doesn’t tell the whole story. Some cities, St. Louis included, implemented school closures and bans on public gatherings early, then released them as it seemed the danger was over. But the flu often rushed back as soon as interventions lifted. Denver and St. Louis both saw spikes in cases after they lifted their bans. None of the cities that kept their bans in place saw that second wave (really, a third wave—the fall of 1918 was already the second, deadlier wave in the pandemic).

Our medical knowledge and typical way of life may have changed drastically in the last century, but the way viruses spread from person to person hasn’t—and neither has the effect of social distancing. Cities hoping to contain the spread of COVID-19 shouldn’t be waiting to implement those measures until it gets bad. By then, it’s probably too late.

Note: A previous version of the first chart incorrectly labeled the peak point on the line. That label has been removed.

What Are Superfoods?
Your official 10K training meal plan, because something needs to power all those runs
25 seaweed recipes that prove it’s delicious beyond sushi
Instant Pot Mini Is the Perfect Gift for a College Kid & Is Just $45 Right Now
The plant-based eats that keep this SLT instructor strong enough for a day’s worth of classes
This ‘Great British Bake Off’-Approved Mixing Bowl Is on Sale for Just $15
Two All-Purpose Baking Flours Recalled by FDA Due to E. Coli Scare
SHOP