The toughest, most versatile shop vacs for any job

Class IV Laser Therapy Benefits and How to Use 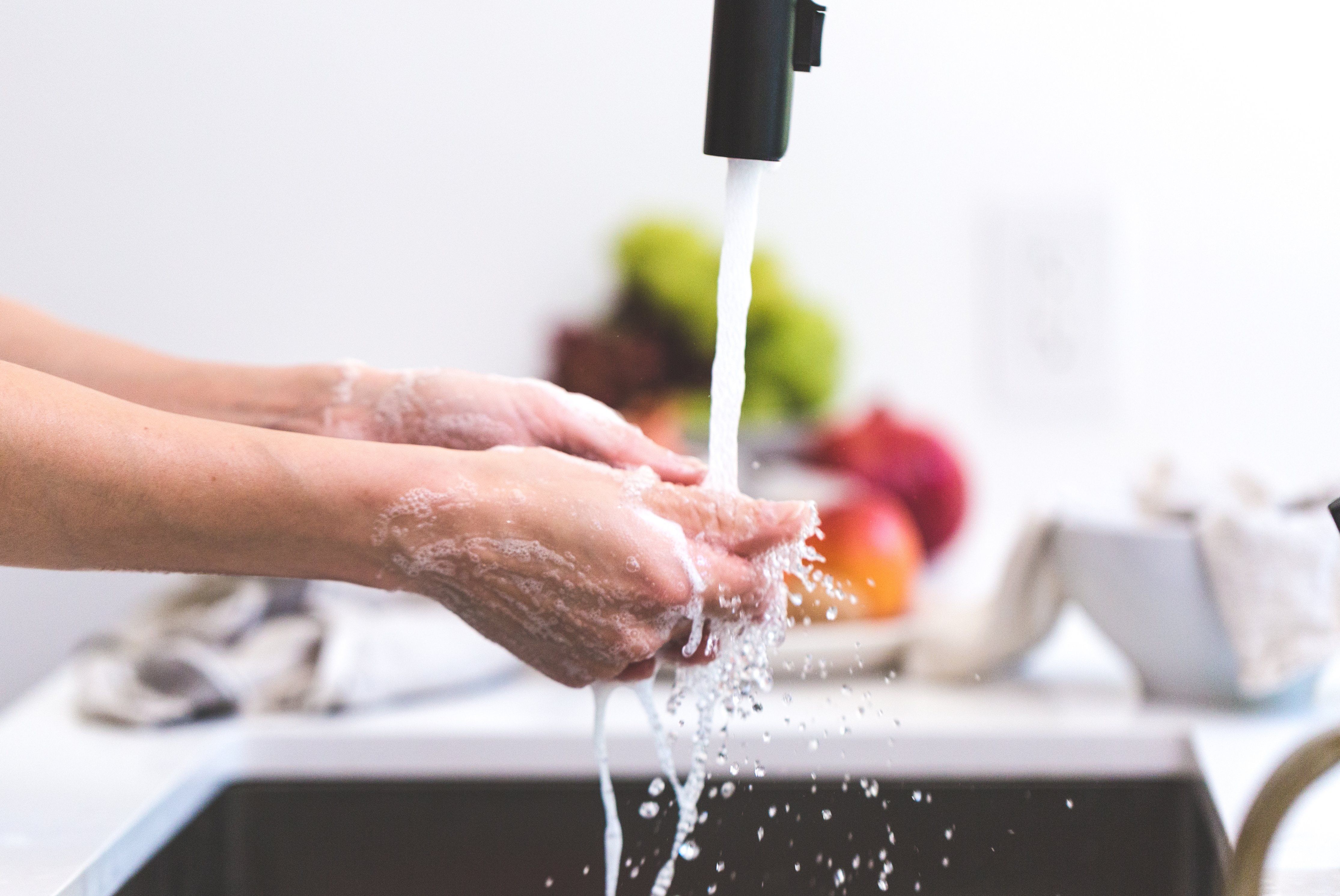 The magnitude of COVID-19′s grip has come at the world fast making it difficult to grasp. Sometimes, visualizing the statistics makes them easier to comprehend. By now, you’ve probably seen hundreds of maps strewn across the internet, depicting coronavirus cases around the world, and countless graphs and charts showing the dramatic rise in confirmed cases over the past few weeks. The problem is that COVID-19 has become such a complex disease that it has proven itself difficult to visualize accurately.

Take what has become the predominant way to show case counts: a map. Visualizing where in the world has the most number of confirmed coronaviruses cases isn’t an inherently bad idea—at PopSci, we made such a map towards the beginning of the outbreak precisely because it seemed smart to show readers where the epidemic was hitting hardest.

But there are some problems with these maps. One is the difference in scale between countries hit hard (like China, the United States, and Italy) and those currently more spared is massive. If you scale bubbles on a map to the number of COVID-19 cases, the bubbles for hard-hit areas quickly envelop the entire map. This covers up countries with fewer cases. Using colors isn’t necessarily better, since the disparity between countries with tens of thousands of cases completely overshadow those with mere thousands. To see why, let’s look not at a map but at a grid showing every country with at least one coronavirus case (as of March 19), and how their outbreaks have progressed since late January. 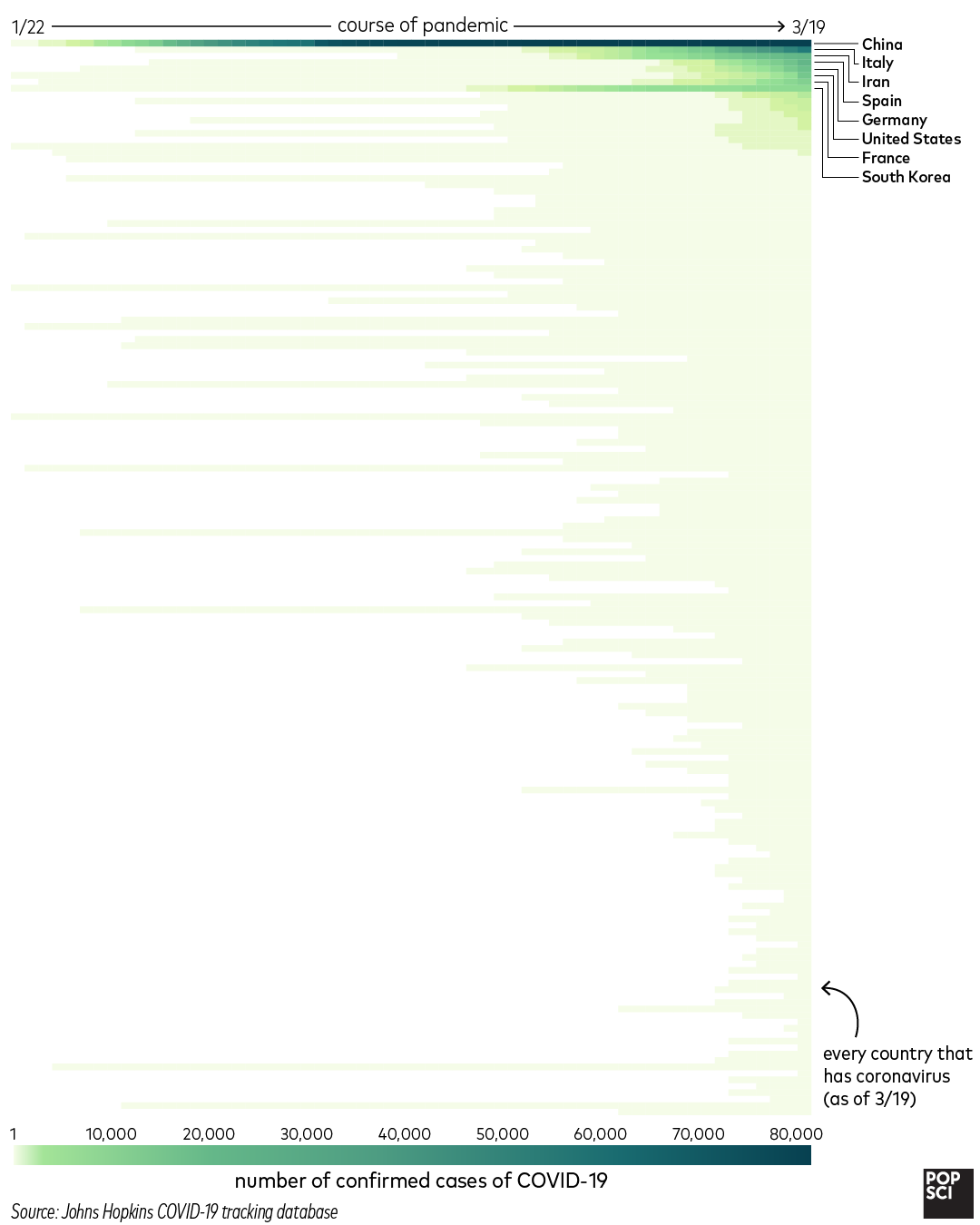 Up to date through March 19. Excluding countries with populations under 50,000 (Infographic by Sara Chodosh/)

Based on that graph, you’d say that China is way out ahead of the pack, with Italy, Iran, Spain, Germany, the US, France, and South Korea not too far behind. To some degree that’s accurate, but it’s still far from the real story in a couple of crucial ways.

First, the case counts don’t account for the population of a country. China has roughly 1.3 billion people, whereas Italy has 60 million. If they had the same number of confirmed cases, they’d have drastically different portions of their population who are affected.

To remedy that we can look instead at infection rates, which are adjusted for the country’s population and given as cases per one million people. That graphic tells quite a different story. Here we’ve shown the countries in the same order as before, and labeled the top 10 countries by infection rate.

Excluding countries with populations under 50,000 (Infographic by Sara Chodosh/)

China doesn’t even crack the top 30 countries by case rate, which is itself misleading because Wuhan, as the origin of the outbreak, was far harder hit than any other region. Norway now makes the list, as does Greece, Austria, and Switzerland. Luxembourg and Andorra are in the top 10 largely because of their exceptionally small populations (roughly 600,000 and 77,000, respectively). Spain and Italy have large populations, but enormous case counts.

Iceland is perhaps the most interesting. As a country of only about 365,000 people it would be easy to assume it’s only on this list by virtue of its small size, but the truth is that Iceland has the highest testing rate of any country in the world right now. South Korea has tested about 5,200 people per million, and that’s twice as high as any other country, Iceland excluded. But Iceland has achieved double South Korea’s rate. That means they’ve found far more cases than anywhere else because they’ve tested an enormous number of asymptomatic people and found the coronavirus lurking in places few other countries are even looking.

And that brings up another major issue with looking at pure case counts: You’re only ever looking at confirmed cases. Most places aren’t testing a huge number of people right now, which means there are certainly many more folks infected than the stats suggest. And because of the massive variation in testing rates, it’s close to impossible to compare case counts between countries (or sometimes even within one) because our ability to detect mild cases is so low in some areas.

Take a look at this chart of confirmed COVID-19 cases across US states:

Based on this chart you’d say that just a handful of states hold the vast majority of cases. But if we instead plot confirmed cases versus testing rates, you’d see another story: The places with the highest infection rates also have the highest testing rates.

Most states are clustered at the bottom right now, but we’d be wise not to chalk that up to a lack of infections, but rather to a failure in testing. As we continue to ramp up testing, we’d expect to see huge jumps in case counts as well.

The graph of total confirmed cases worldwide is terrifying (and, frankly, it should be). It’s rising at an exponential rate and showing no sign of stopping. But for context, it’s also worth showing the large fraction of people who have already recovered from the virus.

That curve is going to look very different as cases skyrocket in areas other than China, but we might take some solace in knowing that every time you hear the case count for China, you should remember than two thirds of those people are already over the virus. As of March 24, there are more than 81,500 confirmed cases there, of which more than 60,300 have recovered.

On the other hand, places like Italy are still suffering massively. They currently have nearly 64,000 cases and only about 7,400 have recovered so far, which is only marginally more than the number of people who have died there.

The death toll is itself complicated. Looking at the graph above you might conclude that only a tiny fraction of people who contract COVID-19 die from it. And that’s true. But it’s important to remember that even a relatively low death rate—we’re talking low single-digits—works out to millions and millions of people dying worldwide. High death tolls also means overwhelmed hospital systems, which means even more deaths, both from those with coronavirus and those with other diseases who can’t get access to proper healthcare.

This pandemic is now a once-in-a-lifetime event at a scale that few of us could ever have imagined (though many warned us about). It’s hard enough to keep up with the news, let alone really grasp what’s going on worldwide, but amid the panic it’s crucial that we keep striving to understand the situation complexly. Daily updates on case counts and disease spread are important—but they’re not the whole story.