A Guide To The Paleo Diet (+ Who Should Follow It & Recipes To Get You Started!)

The Top 4 Exercises For Weight Loss (But Wait, We Have Some Important Advice First!)

Foods To Eat & Foods To Avoid When You’re Pregnant 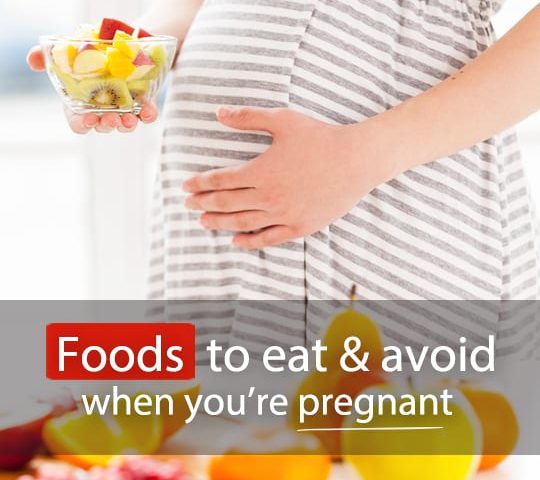 It’s always better to err on the side of caution when it comes to your diet when pregnant. There are some foods you need to take completely off your menu for the whole nine months. Some other foods are best to avoid, especially when eating out, just in case you get a bad batch of something. What you put into your body needs to be carefully considered. Here are our recommendations for foods to eat, foods to avoid, and foods to think about before consuming them… 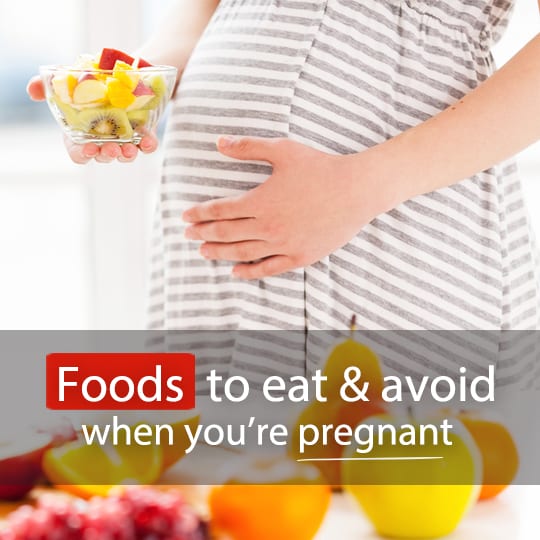 “Life is always a rich and steady time when you are waiting for something to happen or to hatch.” That E.B. White quote from Charlotte’s Web acts as a friendly reminder that you do need to slow down, ensure you minimize stress and keep yourself fairly steady and healthy when you’re waiting for a new arrival.

All pregnancies vary, with some mothers-to-be breezing through the first trimester while others struggle to keep anything down. The first three months of pregnancy are the most difficult on your body in many ways. That’s because your body has to suddenly develop a life-support system for the baby. Hormones are released, blood volume increases, blood pressure decreases, and joints and muscles loosen to accommodate your stretching uterus. Because the body is working overtime to create this support system, women tend to feel tired and often nauseous. That can make it difficult to care about what you’re eating and convince yourself to prepare natural, nutritious meals. The first three months are the most vulnerable to miscarriage, and nausea tends to be at its worst.

Moving on to the second and third trimester, and that’s when you need to start upping your calorie intake. The myth that women need to ‘eat for two’ is just that – a myth. During your first trimester, you don’t need to increase your calorie intake, and if you do, it’s only by a little. The second trimester demands about 340 more calories a day, and in the third trimester, that increases to about 450 extra calories a day. However, the good news is, your body becomes more efficient at absorbing nutrients during pregnancy. That’s why you probably won’t need to increase your calorie intake during the first three months of pregnancy.

Foods To Avoid During Pregnancy

It almost seems like the list of forbidden foods is longer than the list of recommended foods when you’re pregnant. Don’t drink alcohol. Overcook eggs. Don’t eat cold meat. Don’t eat soft cheese. The list goes on and we’ll get to that. But, while the list of ‘nos’ does look long and overwhelming, there actually are more foods that you still can eat than can’t eat. There are also some grey areas, which involve personal choices and weighing up the risks. We’ll get to those as well. Firstly, though, let’s cross these foods off the list… 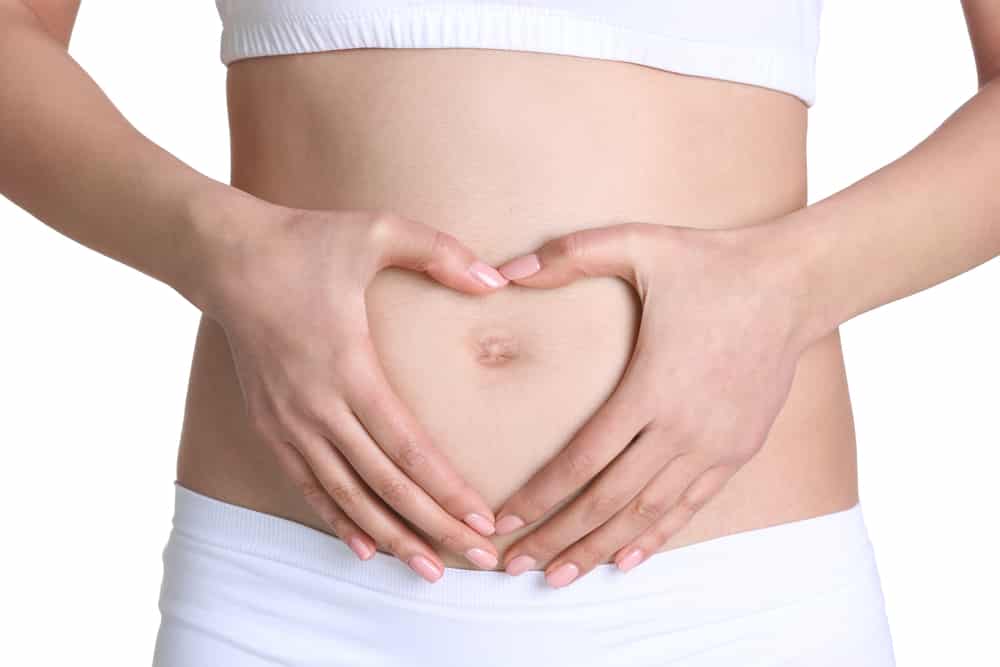 It’s best to steer clear of soft and semi-soft cheeses like brie, camembert, blue cheese, feta and ricotta. That’s because they may contain the bacteria listeria, which can cause an infection called listeriosis. Listeria increases the risk of miscarriage and can harm the fetus. However, there is an exception if they are thoroughly cooked to at least 170° Fahrenheit (75° Celsius) and eaten pretty much immediately. 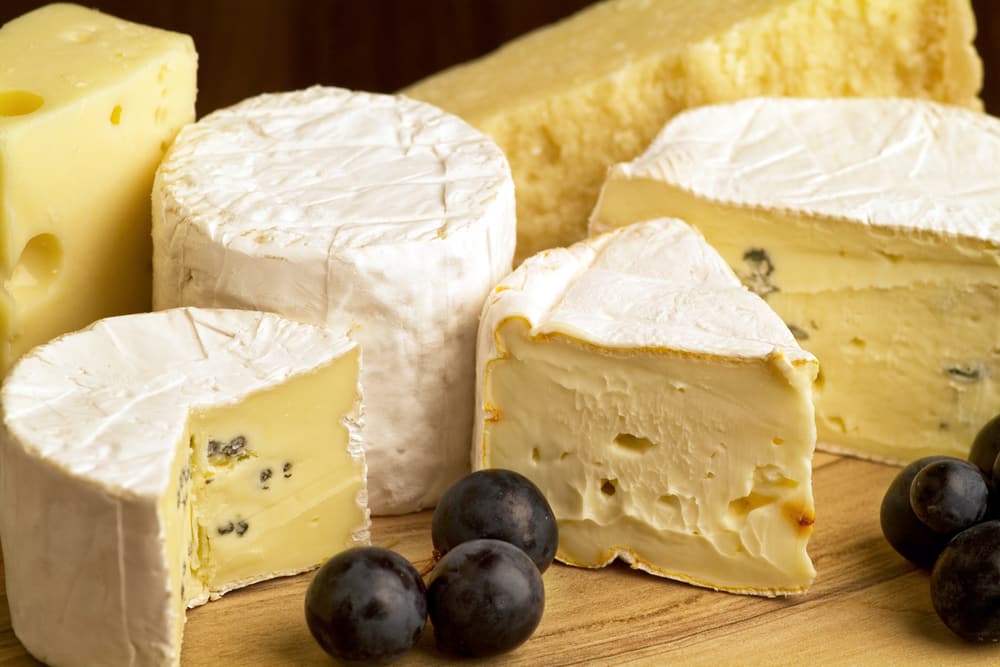 This is the one everybody seems to know about. There has been talk around whether a glass of champagne at a wedding is harmless or a pint of Guinness can ease pregnancy nausea, but the science says don’t risk it.

Drinking alcohol increases the risk of miscarriage and stillbirth. It can also affect your baby’s brain development or result in fetal alcohol syndrome. This can cause facial deformities, heart defects and intellectual disabilities. Even a small amount of alcohol consumption during pregnancy can affect a baby’s development. It is therefore recommended women avoid it completely for the duration of pregnancy. 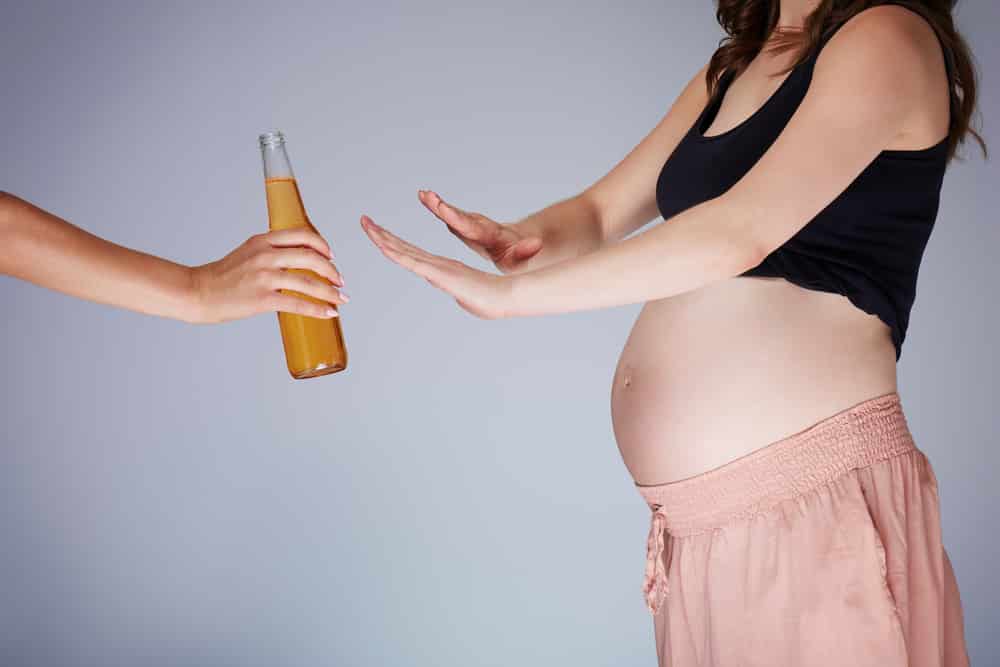 Salmonella is the biggest risk when it comes to the consumption of raw or runny eggs. It is an infection that causes fever, severe nausea, vomiting, diarrhea and stomach cramps. While these symptoms are usually experienced by the pregnant woman only, cramps may occur in the uterus, potentially causing stillbirth or premature birth.

Some foods you may not be aware contain raw or nearly-raw eggs include traditional Italian carbonara, some cake frostings, tiramisu and hollandaise sauce (to name just a few). There are new reports coming out all the time in different countries to say whether they are safe or not for pregnant women to eat. However, we would say, err on the side of caution, and thoroughly cook your eggs. If you prefer them runny or raw, you can enjoy them again once your term is over!

Raw or processed meats and pates can contain harmful bacteria, viruses and parasites. Some processed meats, such as hotdogs, can contain the bacteria listeria, which we mentioned earlier in relation to soft cheese. It can be harmful to your baby and increases the risk of miscarriage. Cold meats, like sandwich and deli meats (turkey, ham, pastrami etc) and pates can also contain the harmful bacteria. It is therefore safer to avoid all processed, raw or cold meats and pates during pregnancy when you are out and about. However, as always, there are exceptions. For example, some experts say frankfurters, for examples, are acceptable on occasions if they are completely reheated until they are steaming hot. As there are no health benefits from such foods, though, we suggest avoiding them altogether during pregnancy.

This one might come as a surprise if you thought (logically) that all vegetables would be safe to eat. Raw sprouts, however, are not safe to consume during pregnancy. In the past 20 years or so, there have been at least 30 outbreaks of foodborne illnesses in the US associated with raw or lightly cooked sprouts. They were traced back to different types of sprouts, and most were related to salmonella and E. coli. It is therefore recommended that pregnant women avoid eating sprouts, including alfalfa, clover and mung bean sprouts. 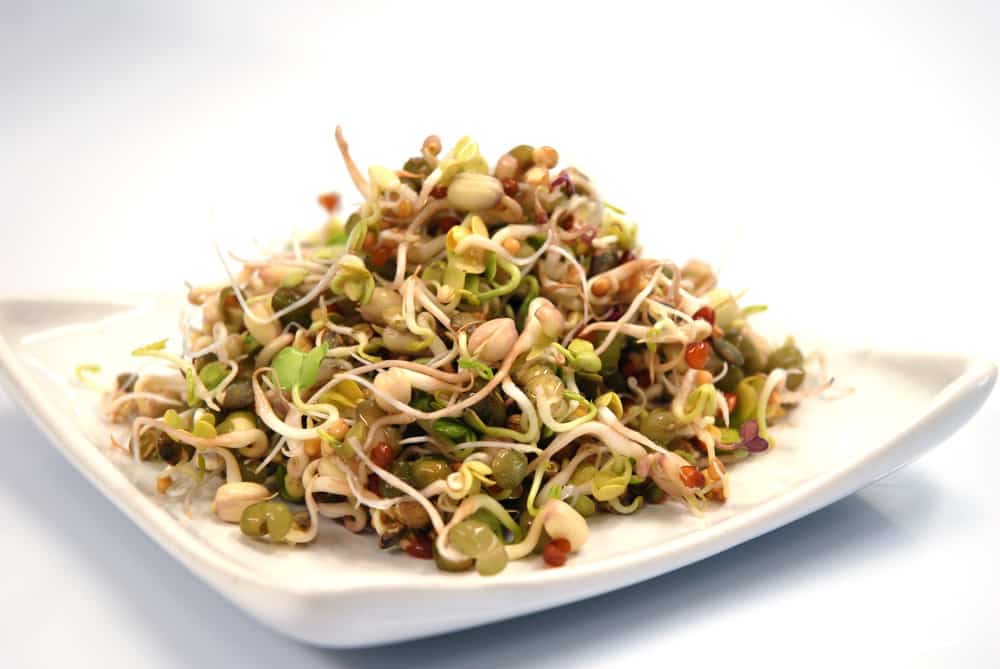 Like raw and cold meats, raw and cold seafood is also dangerous to consume during pregnancy. There is a risk of bacteria, again, such as listeria, as well as potentially viruses and parasites. Smoked seafood is fine if it’s refrigerated and then cooked as an ingredient in, for example, a casserole, which will ensure it is thoroughly cooked and heated.

High-mercury fish, like tuna, mackerel, shark and swordfish, can be harmful to pregnant women and babies. That’s because mercury is a toxic element. It can therefore be toxic to the nervous system, immune system and kidneys if consumed in high amounts. However, small servings once or twice a month are considered to be safe.

Foods To Eat During Pregnancy

There are plenty of foods that you can eat, and many of them contain nutrients that are vital to the healthy growth of your baby. Let’s take a look at some of the most beneficial foods to make sure you include in your diet (provided you don’t have any allergies or restrictions!).

Calcium is an incredibly important mineral for pregnant women and their growing babies. Dairy, or calcium-enriched dairy alternatives are a good source of the essential nutrient. Many dairy products, or enriched alternatives, also contain vitamin D, which is needed for the body to absorb calcium. Milk, hard cheeses, and calcium and vitamin D enriched plant milks are good options for pregnant women. However, don’t drink unpasteurized milk or eat unpasteurized cheese. The process of pasteurization is used to kill harmful bacteria. That means there is a risk in unpasteurized products, that bacteria could be present.

This one should not come as a surprise. Fresh in-season (and preferably local) fruits and vegetables are incredibly healthy. They are a great source of fiber, which helps prevent constipation – a problem many women face. They are also high in a number of vitamins and minerals. Vitamin C is a particularly beneficial nutrient during pregnancy because it helps with iron absorption. Citrus fruits, including lemons, grapefruit and oranges are high in vitamin C. Folate is another nutrient that is essential during pregnancy because it supports the development of your baby’s nervous system. It’s so important, in fact, that it’s one of the most recommended natural supplements for pregnant women. Spinach, wheat germ and beans are all good sources of folate. 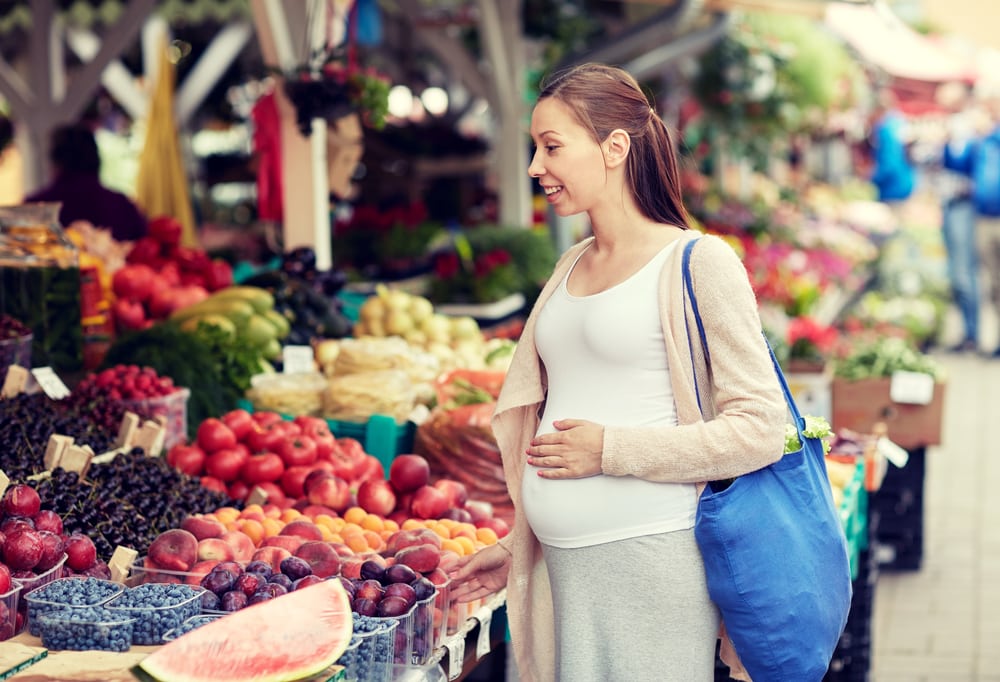 If you’re not vegetarian or vegan, then meat and cooked fish (with the exception of high-mercury) are perfectly fine to eat, and there are some health benefits to eating quality, lean meats. They include protein and iron, which are both extremely important for your health and the healthy development of your baby. However, it’s extremely important to cook your meat completely and eat it while it is still hot. As mentioned earlier, it’s best to avoid cold meats and it’s definitely recommended to completely avoid raw or rare meats.

Nuts and seeds contain healthy fats, which are beneficial during pregnancy. Omega-3s, which are also found in high amounts in some fish like salmon, are particularly good for the baby’s development. Studies have shown that adding the omega-3s EPA and DHA to the diet positively effects the visual and cognitive development of your baby. 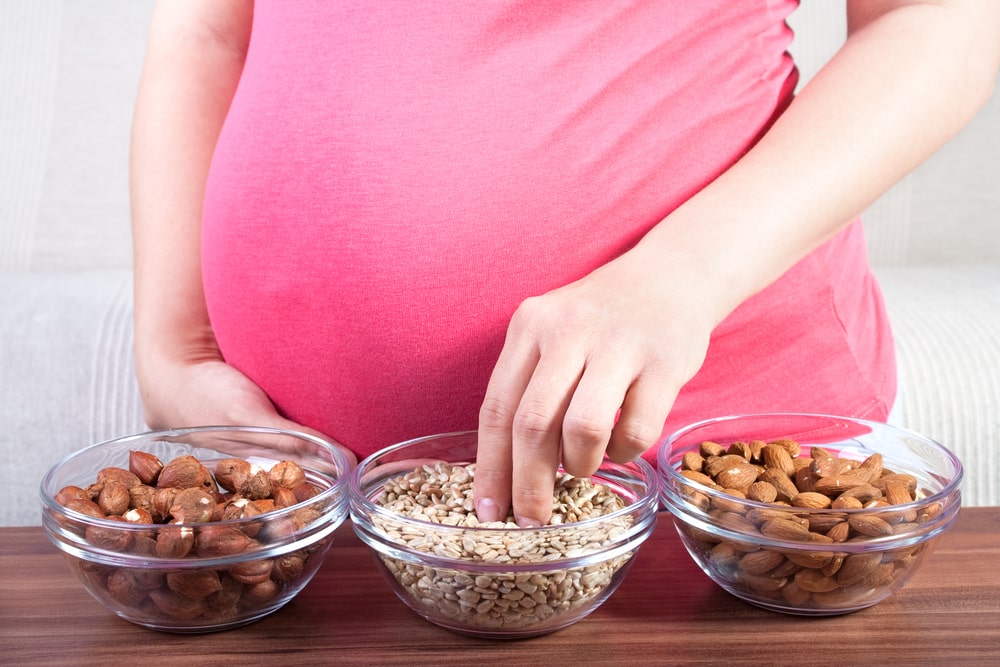 Some foods are fine to eat during pregnancy, even if they are not particularly healthy, while nutritionists remain ‘on the fence’ in relation to some others. Hard cheeses, for example, are safe to eat, if kept refrigerated and eaten within their use by dates. However, eating cheese in excess is not good for your health.

This is an example of an ‘eat with caution’ food. Generally speaking, pre-cooked frozen meals can be eaten if they are reheated according to directions at home and you ensure they’re piping hot all the way through. In relation to things like hot chicken from the supermarket, they are generally considered fine if you eat them while they are still hot, and then refrigerate and eat within 24 hours. 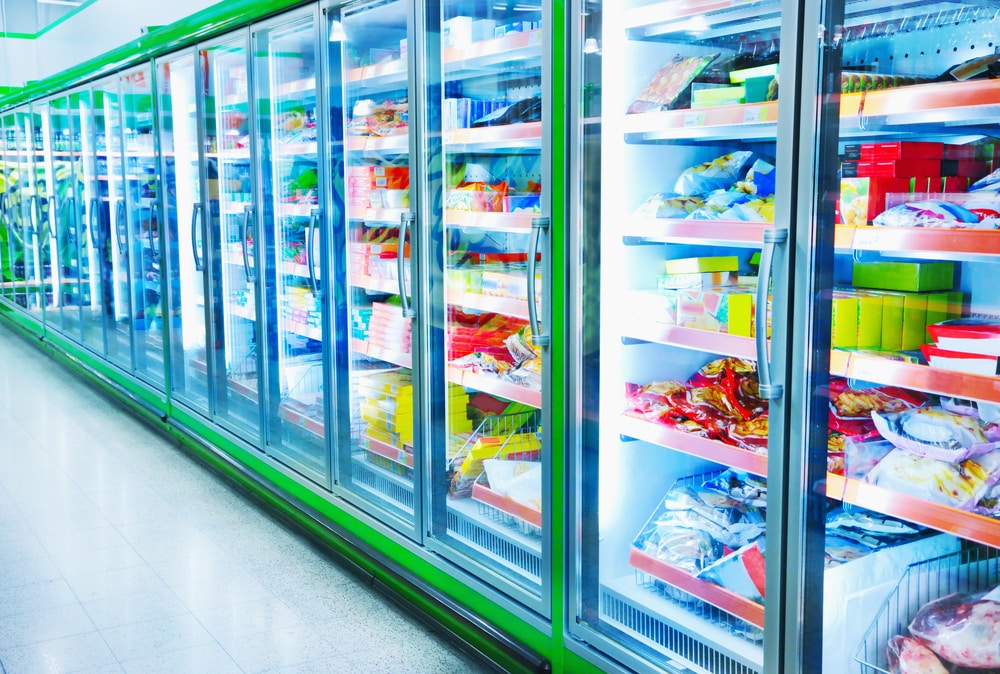 Generally speaking, we’d recommend avoiding caffeinated fizzy drinks full-stop, because they are full of artificial ingredients and all sorts of nasty things. Coffee and tea, however, can be enjoyed in reduced amounts. It is generally recommended you limit your coffee intake to one cup per day, while you can have up to four cups of medium-strength tea. 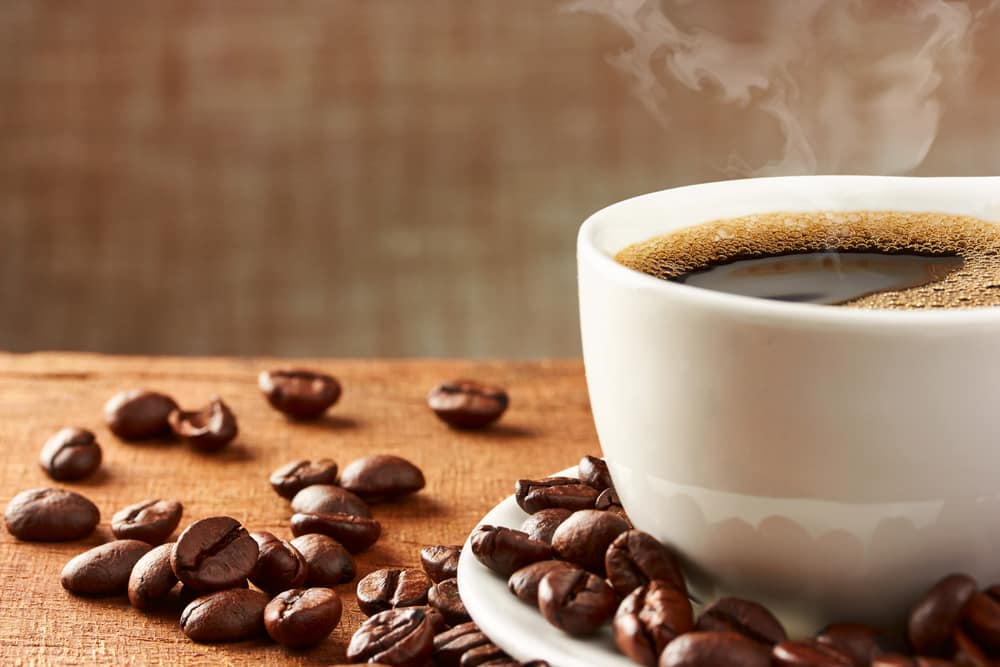 We always recommend women speak with their doctor or dietitian about what they can and can’t eat during pregnancy because it’s impossible to list absolutely everything here! Do your research on any food you want to eat that is not mentioned above.

The post Foods To Eat & Foods To Avoid When You’re Pregnant appeared first on Healthwholeness.