Hot peppers have been used for cooking and medical purposes for ages, and the serrano pepper is one of them.

Not only does it share the characteristics of the desired spiciness in many popular dishes, similar to cayenne pepper, but the serrano pepper can actually generate relief for sore muscles, arthritic patients, those who have heart problems, boost the immune system and, oddly enough, help cool you down on a hot day. So what allows these serrano pepper benefits to take place? Let’s take a look.

What Is A Serrano Pepper?

Like most peppers, the serrano is the fruit from a plant species called Capsicum annuum and closely related to Capisicum frutescens, which is where the peppers for the tabasco sauce comes from, and C. chinense, which is where the super-heated habanero, also known as Scotch bonnet chili, comes from. Like tobacco, tomatoes, potatoes and eggplant, peppers are a part of the nightshade vegetables family.

The serrano pepper looks a lot like the jalapeño, but if you think the jalapeño is hot, just wait until you get the kick from the serrano. This type of pepper ranks between 5,000 and 25,000 on the Scoville heat index, also known as the hot pepper scale, which is a measurement used to rank the pungent heat of chili peppers. The scale is named after the man who created it, Wilbur Scoville.

To put things in perspective, just how hot is the serrano as compared to other peppers? The level of heat is directly affected by the genetic ancestry of the plant as well as its environmental surroundings. And while the serrano pepper is not the hottest pepper out there, the Scoville scale puts it about midway down the list as you can see here:

The serrano pepper is a green color, ripening to red, brown, orange or yellow. It’s about two inches in length, but don’t let the small ones fool you. The smaller the serrano, the hotter. Another thing to note is that dried peppers can be much hotter than fresh ones.

The orange has long held the reputation for providing the most vitamin C, but the serrano pepper may have that orange beat as a vitamin C food. Getting enough vitamin C is important to the immune system and tissue repair caused from inflammation.

According to research from 2015, the serrano pepper is among the types of peppers that help boost the immune system due to the high-antioxidant levels. In particular, the carotene is beneficial against all types of disease, including chronic diseases like cancer and heart disease. (1)

The heat-stimulating capsaicin found in chili peppers like the serrano has been found to help lower cholesterol levels because it’s able to reduce the accumulation of cholesterol in the body while helping the body detox through the excretion in the feces. The peppers can also prevent arteries from contracting, which can restrict blood flow to the heart.

Dr. Zhen-Yu Chen, Ph.D., a professor of food and nutritional science at the Chinese University of Hong Kong, presented research that hot peppers can benefit the heart and help reduce risk marker for coronary heart disease, and while he does not recommend eating too many peppers, he  concludes that as a supplement for those who enjoy the spice, hot peppers are beneficial in heart health, improving the blood vessels throughout the body. (2)

3. Relief for Arthritis and Sore Muscles

Capsaicin is what produces the heat in chili peppers. When applied topically as a cream, gel or patch, the capsaicin provides relief by depleting substance P, which is a neurotransmitter that sends pain-related messages to the brain.

Capsaicin may reduce pain from osteoarthritis, rheumatoid arthritis and fibromyalgia. A 2010 German study showed that joint pain decreased by about 50 percent in patients who used capsaicin cream, which can be obtained from serrano peppers. Initially, it may cause a little burning or stinging as substance P is released and eventually depleted, but with regular use, the substance P does not build up again and the burning sensation should not occur. (3)

Shingles can cause a lot of discomfort, and almost one out of every three people contract shingles at some point in his or her life. The U.S. Food and Drug Administration has approved capsaicin for relieving pain of shingles (Herpes zoster). (4)

The elimination of substance P, which I noted above, is key to the much-needed relief form shingles because it helps reduce the pain associated effects and shingles symptoms. Like cayenne pepper, the capsaicin compound found in serrano pepper helps release and eliminate substance P.

UC Davis reports that a low concentration topical capsaicin has been used for decades as a treatment. It’s possible that this treatment may reduce pain for several months. (5)

If you wonder just what makes the chili hot, it’s the capsaicin it contains. Capsaicin is an active compound that actually helps our bodies adapt to hot climates by lowering body temperature. Have you seen someone sweat profusely in the face after eating a pepper? That actually has a name. It is called gustatory facial sweating.

The capsaicin compound in the pepper is doing its job by inducing a natural cooling method. It does this by sending messages to the brain that an intense warmth is occurring and the body needs protection.

So, how does this help you adapt to hot outside temperatures? When you sweat, you’re cooling the body. Since the peppers induce sweat, they have been commonly used for years in places like Central and South America, India, Africa, Southeast Asia, and the Caribbean to cool down faster on a hot day. (6, 7, 8)

One cup (105 grams) of chopped, raw serrano pepper contains about: (9)

When choosing a serrano, select a firm, heavy, smooth-skinned pepper. Make sure the pepper doesn’t have any moisture within or around it. Serranos are usually green, which are milder, eventually ripening to yellow, orange or red. They typically don’t do well when dried, so using them fresh offers the best results. Roasting them is another option, which can provide a deliciously spicy flavor. You can even freeze them after roasting.

If you want to cut down on the heat a bit, removing the seeds and cutting out the fibrous ribs inside the pepper help since the majority of the heat is found there.

To store your fresh serrano peppers, refrigerate them between paper towels or in a paper bag for up to three weeks. Make sure you wear rubber gloves when handling them and wash your hands well after use. This helps prevent irritation to the skin or eyes.

To get your serrano pepper fix, try the following recipe: 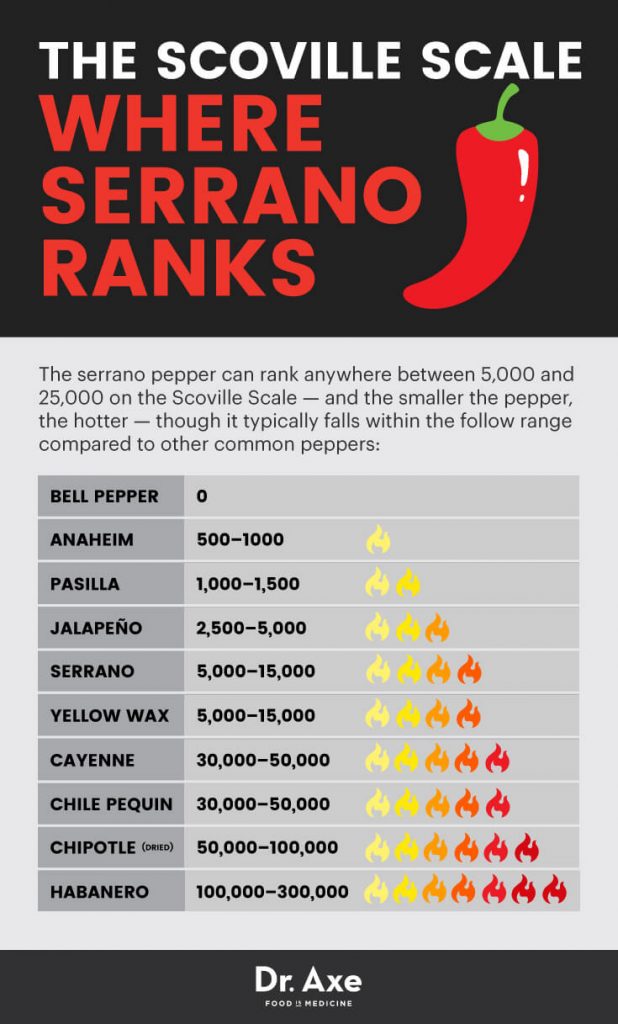 Here are a couple more serrano pepper recipes to try:

Risks and Side Effects

As previously noted, the serrano pepper contains capsaicin, and while it has many benefits, it’s also where the heat of the pepper comes from. That heat can cause problems for some, so before you head over to the chili pepper eating contest, be careful. It can cause problems to the mucous membranes and burn your taste buds.

The University of Michigan Health System suggests eating a banana to reduce this burning sensation. Make sure to wash your hands with vinegar after touching hot peppers if you feel a burn. Wear kitchen-safe gloves when dealing with capsaicin as well. Avoid contact with your eyes when handling peppers.

If eating too much, it has been known to trigger asthma attack. For anyone prone to asthma or who may have an allergy, steering clear hot peppers is best. (10)

Serrano peppers are wonderful additions to dressings, burgers, salads and guacamole, to name a few options. The health benefits are vast, from boosting your immune system, aiding in a healthy heart and even helping reduce the pain associated with arthritis.

Consider trying it in some recipes and in moderation to start, but be careful, as the heat can cause issues for those sensitive to spicy foods or who have allergies. But if you can handle the heat, the health benefits are totally worth it.

Delegating Work: What to Delegate and What Not to?

Here’s a fact: You might have heard a lot about the importance of delegating work. But if you’re a new leader or manager, it won’t...
Read more

How to Write an Impressive Cover Letter (With Examples)

Think of your cover letter for a job application as an in-person introduction. Your resume outlines the facts—where you worked and for how long,...
Read more

What to Do If You Grew up in a Dysfunctional Family

No family is perfect! It's far from it. All families experience some level of dysfunction. Most, however, manage pretty well despite it. There are gradients...
Read more

Entrepreneurship is a constant learning process that’s going to be full of both peaks and valleys. Gaining knowledge from the people who have come...
Read more
Load more