Eat the Rainbow: The Science Behind Brightly Colored Summer Fruit and Why It’s So Good for You 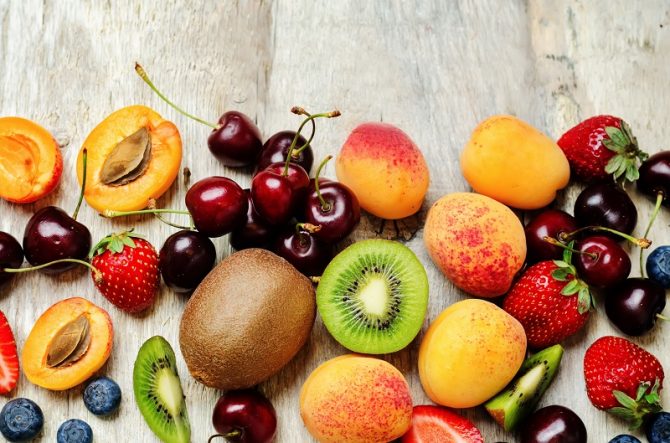 Unicorn trends may come and go, but there will always be something appealing about brightly colored food, especially if the vibrant hues are all-natural. There are plenty of gems studding the stereotypical beige bleakness of the winter food scene, but summer definitely brings a broader and brighter rainbow of produce, from sunset-colored peaches to crimson tomatoes—the fruit family being particularly striking. We know we love them as much for their looks as for their taste, but what makes these summer fruits so bright and beautiful in the first place?

Well, it depends on the color—different naturally occurring substances account for specific pigments in a range of fruits and vegetables, and those pigments are further influenced by pH levels in each individual fruit, so we get a wide spectrum of shades even within one color family. Per a 2010 paper from UC Davis, “The primary pigments imparting color quality [to fruits and vegetables] are the fat soluble chlorophylls (green) and carotenoids (yellow, orange, and red) and the water soluble anthocyanins (red, blue), flavonoids (yellow), and betalains (red).”

Many fruits and vegetables contain more than one of these compounds too, and all in different concentrations, but in a general sense, here are the major players responsible for the vibrant palette that paints our summer fruit, which also happens to benefit our health as well as our sensibilities.

Lycopene is actually a type of carotenoid (more on those a little later on), but it’s responsible for the vivid pink-red flesh of most watermelons, as well as the red in tomatoes—which, as you may remember, are also a fruit. Of course, there’s practically an entire rainbow of tomato shades alone, but the classic crimson beefsteak, and all other red tomato varieties, are the ones containing this compound. Lycopene is a powerful antioxidant that has been shown to have a host of health benefits, including helping to prevent heart disease and certain cancers. Why not double up on both the benefits and the taste with our Watermelon, Tomato, and Kalamata Olive Salad?

Anthocyanins are named for a combination of the Greek words for “dark blue” and “flowers”—and they are responsible for deep blue and purple pigments in many fruits, but they also cause bright red colors, like in raspberries. The pH levels of different fruits determine the exact shade expressed, but regardless of the color, these compounds are also antioxidants that may help prevent cancer and improve brain function. They’re often used as natural food coloring for things like blue tortilla chips, jelly beans, and fruit soda. In their original packaging (aka whole, fresh fruits and veggies), we like them any way we can get them—eaten as-is, of course, but also in fruit salad, on flatbread, in salsa, or even grilled, whether for dinner or dessert.

Closely related to anthocyanins are betacyanins (a type of betalain, which you may recall from the UC Davis run-down earlier). These are found in plants of the Caryophyllales family, including beets, carnations (which can be eaten if free of pesticides), cacti (many of which produce edible fruit), and pitaya, or dragon fruit. 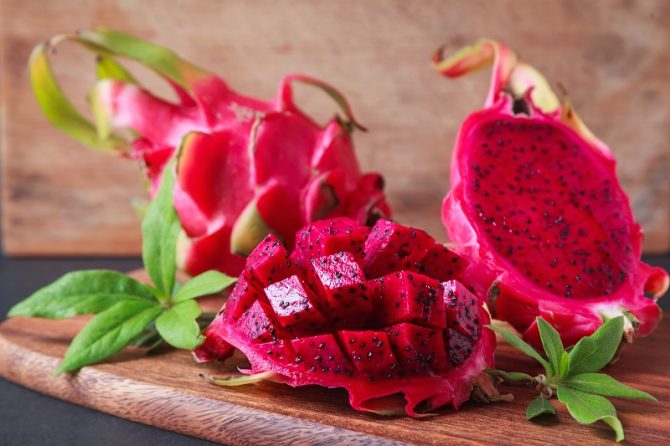 Some dragon fruit flesh is snow white, but some is bright magenta. Unlike with berries, you can’t easily tell what you’re getting by looking at the outside of this one; both the fuchsia-fleshed and white-fleshed varieties are neon pink outside, though some sources say the pink-fleshed ones are generally smaller. Thanks to the rising/enduring popularity of smoothies and açaí bowls, you may be able to find the magenta dragon fruit flesh in the freezer section of your store all year long, and you’ll probably see the fresh fruit year-round too, but the natural growing season starts in midsummer, so we’re counting it here along with more familiar summer fruits. (And there are just as many great things to do with dragon fruit.) 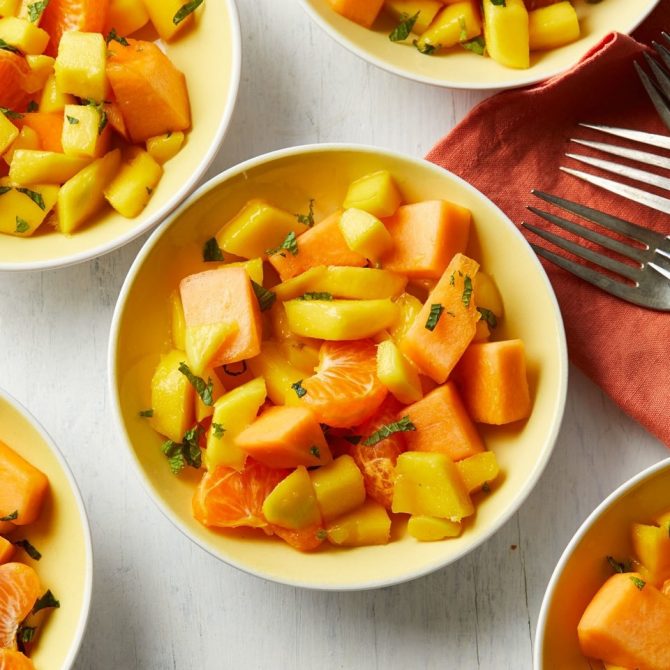 As mentioned when talking about tomatoes, lycopene is one type of carotenoid that causes red coloration in produce, but other types of carotenoids include lutein and beta carotene, which are responsible for yellow and orange pigments, like you see in peaches, mangoes, cantaloupe, apricots, and nectarines (as well as carrots, of course, plus corn, squash, and pumpkin). These compounds are thought to help prevent cancer and eye disease—so there’s some truth to the longstanding claim that carrots are good for your eyes; but so are other foods rich in beta carotene.

Now, remember how we mentioned that many fruits and veggies contain multiple color-influencing compounds at once? Raspberries are a great example. When we think of them, we usually think of brilliant ruby red or deep pink-tinged berries, but golden raspberries also exist, and are completely natural (i.e. not genetically modified, although selective breeding has made it possible to grow them on a larger commercial scale). 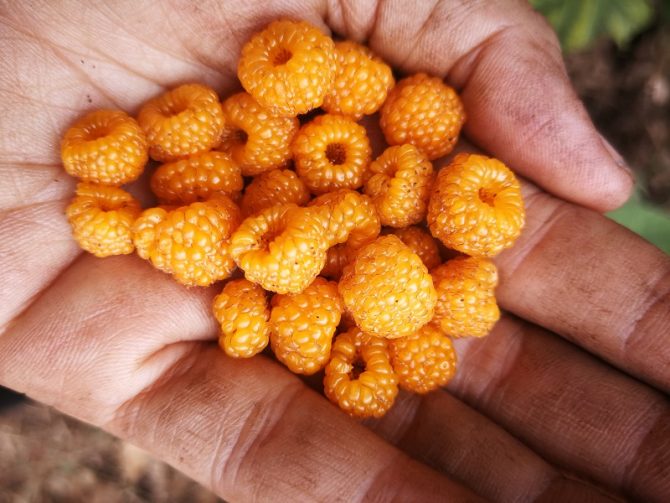 Both types of raspberries contain beta carotene, but red raspberries also contain the aforementioned anthocyanins, which mask or override the golden coloring they would otherwise have, and make them bright red instead. Since golden raspberries lack those additional anthocyanins, that leaves their beta carotene to shine through in their lovely color, which can range from a pale straw yellow to more of a muted orange, or even edge into a sort of rose-gold.

Produce giant Driscoll’s cultivates regular golden raspberries and “sunshine raspberries” (a name patented by them) which are available at many major supermarkets, but it’s worth checking out local farmers markets for these rarer berries too. Golden raspberries happen to be less tart than red raspberries, but they can be used in all the same ways, including in jams, preserves, pies, and tarts. Try turning them into cordial too, to ensure a little sunshine during winter, regardless of what the weather has in store.

All plants contain chlorophyll, which makes them green when they’re growing, but most fruits and vegetables lose the pigment as they ripen. Kiwi fruits—which are native to China and were originally called Chinese gooseberries, then melonettes, but got their current name once they became an established export from New Zealand—hold on to a higher proportion of chlorophyll than many fruits. However, they also contain carotenoids and anthocyanins, hence their fetching peridot hue (as opposed to a deeper emerald shade like chlorophyll-rich spinach, which also happens to contain a lot of beta carotene, but that’s masked by the even larger amount of chlorophyll in the leaves; it’s all a delicate balancing act).

Golden kiwi fruit, which is a naturally-crossbred 20th century innovation, is higher in the carotenoid lutein, which would suggest you get more health benefits in addition to a pronounced yellow color, but regular green kiwi is still considered a superfood, thanks to its outstanding nutritional density; it’s packed with fiber, vitamins, minerals, and potassium, while being remarkably low in sugar and calories—meaning, even if you turn it into sorbet for dessert, it’s still pretty healthy. And it keeps its beautiful color intact too.

Related Video: 5 of the Most Bizarre Fruit Hybrids