What Is Worcestershire Sauce and Why Is Everyone Obsessed with It?

Eat Your Way Through the 13 Colonies on July 4th 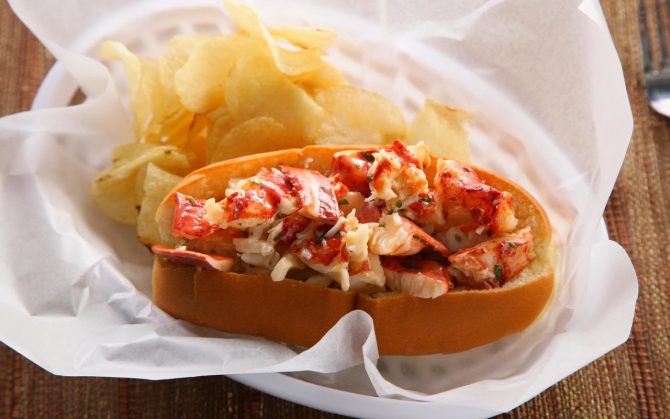 July 4th is a day made for embracing your patriotic side, setting off fireworks, and, of course, eating like it’s your civic duty. So why not create a 4th of July menu comprised of American food inspired by the original 13 colonies? There are plenty of recipes out there that honor the occasion with some sort of food coloring-heavy red, white, and blue dessert thingamajig. But a real American feast takes it to the max. If you really want to express your love of life, liberty, and the pursuit of happiness through food, only a thirteen part bonanza that pays tribute to the culinary specialties of each of the original colonies will do.

All right, so most of these dishes would have been unknown to the signers of the Declaration of Independence. I have a feeling, however, that noted gourmand Thomas Jefferson would be a fan of New Haven clam pizza were he still alive. Read on for a menu that he and the other founding fathers would have found to be nothing short of revolutionary.

Whether you prefer to plop it on a burger, tuck it into a sandwich, or set it out with crackers while the festivities are getting started, pimento cheese is the south’s gift to cheese lovers everywhere. This version adds a couple twists: chipotle chiles in adobo for a smoky kick, and pepper jack cheese along with the traditional cheddar. Get our Pimiento Cheese recipe.

A trip to Philadelphia revolves around two things: touring Independence Hall (where the Declaration of Independence was signed) and eating a Philly cheesesteak. Pay homage to both by making these cheesesteak potato skins, which declare independence by revolutionizing and reinventing the iconic steak sandwich. Get our Philly Cheesesteak Potato Skins recipe.

Although the Buffalo wing originated in its namesake city, nowadays, it has its place as an all-American snacking staple. They’re usually deep fried, but you can make them extra American by throwing them on the grill (because if there is anything more American than deep fried everything, it’s char-grilled everything, right?). Get our Easy Grilled Buffalo Wings recipe.

Sweet and savory is the way I salad

Delaware doesn’t really have a definitive dish that it can call its own. But since this list is pretty lacking in things that are green and healthy, let’s use this spot as an excuse to slip in a salad. Plus, it’s not totally out of place: strawberries are Delaware’s state fruit, while the commercial chicken industry has its origins in the state’s Sussex county (which is still the largest broiler producing county in the nation). Get the Strawberry Salad with Grilled Chicken recipe.

The clam pie can be traced back to one place: legendary New Haven pizza joint Pepe’s. If you can’t make the pilgrimage, it’s also a pizza worth recreating at home. Bonus points for cooking this one on the grill (see our grilled pizza how-to for pointers). Get the Grilled Pizza with Clams recipe.

Easter is only a few days away. For an easy, show-stopping centerpiece, buy a smoked, spiral-sliced ham and doctor it up. Reheat it slowly over indirect heat at 250F degrees ~20-30 min per pound. Make it special with an orange Dijon glaze. Recipe link in profile. #throwbackthursday #easter #ham #baconambassador19 #maincourse #instafood #smoked #girlscangrill #foodporn #bbq #eatthis #foodie

For the big and meaty main, it doesn’t get much better than a smoky Virginia ham—and cooking it on the grill is only appropriate for summer (but it’ll taste just as good heated up in the oven). This recipe finishes it off with a sweet and tangy Dijon mustard-orange marmalade glaze. Get the Grilled Glazed Ham recipe.

Do you seriously call a wiener boiled in some cloudy water and topped with a meager squiggle of ketchup a hot dog? Fuggedaboutit. Char it and load it up with potatoes, peppers, and onions for dogs with lots of big Jersey personality to spare. Bonus points if you spiral-cut your hot dogs and grill ’em too (think of how many more toppings they’ll hold). Get the Italian Style Hot Dogs recipe.

Maine was a part of Massachusetts up until 1820, when it opted to split. Even if the two states are no longer together, they are still linked by their seafaring cuisine. From Portland to Boston and all up and down the New England coast, the lobster roll is a must eat in the summertime. (If you’re a fan of the mayo-free version, get this Lobster Roll recipe, but for a creamier take, click the next link.) Get our New England Lobster Roll recipe.

Maryland can lay claim to many uber-American things: the lyrics to The Star Spangled Banner, the films of John Waters, and crabs, lots of crabs. Ideally, you’d pound at these while belting out the national anthem and doing your best Divine impersonation all at the same time. Get our Steamed Blue Crabs recipe (and do not forget the Old Bay!).

Related Reading: 7 Summer Seafood Dinners You Can Have Delivered

New Hampshire may get drowned out by its attention-grabbing neighbor Vermont when it comes to food, but it still offers all those quintessentially New England flavors that we know and love. These cupcakes feature Granite State favorites like apples and maple syrup. Get our Spiced Apple Cupcakes with Maple Buttercream Frosting recipe.

Down south, it’s the peach and the pecan that reign supreme. This dessert has a bit of both, for a confection that’s full of southern charm. Get our Pecan Streusel Peach Pie recipe.

Gettin’ Serious over here! Frozen Lemonade {Chick-Fil-A Copycat} One of our Summer FAVS!!!! Creamy and refreshing……mmmmm. But so much lighter than a shake. This treat is definitely our jam.

Rhode Island may be tiny, but it has a lot going on for it food-wise: quahog stuffies, johnnycakes, coffee milk, and more. But come summertime, the state’s signature source of brainfreeze, the frozen lemonade, is where it’s at. Get the Frozen Lemonade recipe.

Beauty is in the eye of the Cheerholder. #Cheerwine #UniquelySouthern

North Carolina’s Cheerwine may not have any alcohol in it, but that doesn’t mean it can’t be jazzed up with a little booze. Its cherry-flavored fizz provides a nicely fruity and sugary backdrop to bourbon and a squeeze of lime. Get the Cheerwine Bourbon Cocktail recipe.

Related Reading: The Best American-Made Beer, Wine, and Booze for the 4th of July