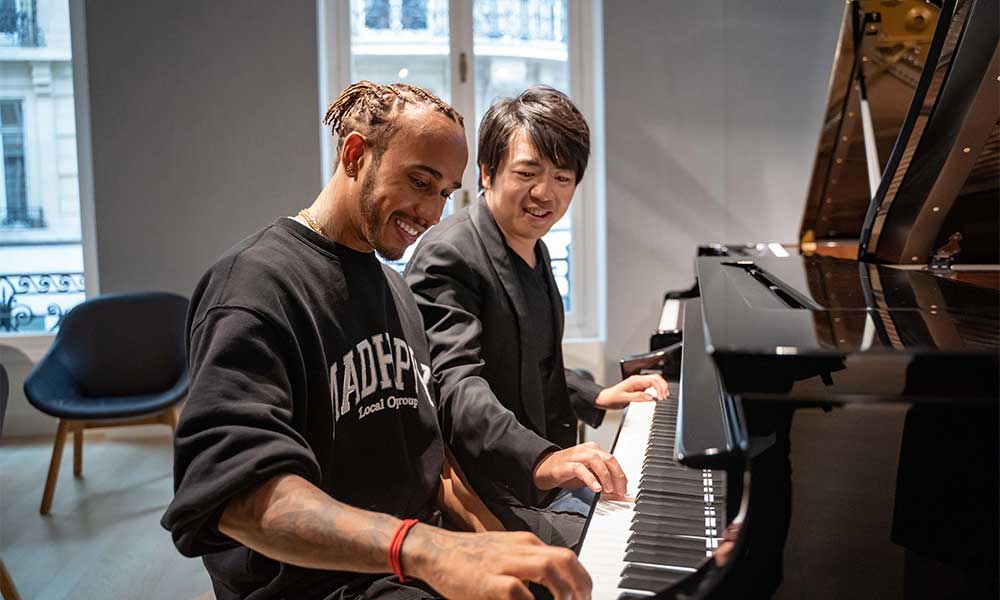 Formula One World Champion Lewis Hamilton jammed with superstar pianist Lang Lang at Steinway & Sons in Paris. Lewis Hamilton, a keen amateur pianist, impressed Lang Lang with his poignant rendition of Adele’s 2001 hit ‘Someone Like You’. “Wonderful”, said Lang Lang and played along with some of the arpeggiated chords. Lang Lang tweeted, “Not only does Lewis Hamilton ace it on the racing track but he is also talented at the piano! Look at how brilliantly he plays Adele.”

Lang Lang then played the opening of Beethoven’s famous ‘Moonlight Sonata’ and they talked about the piece. Lewis Hamilton said, “I tried to learn this,” and Lang Lang then gave him some tips on how to play the sonata. Lewis Hamilton tweeted, “Such a pleasure meeting with Lang Lang. Such a humble guy. I’m determined to get better at playing this year.” Lang Lang tweeted, “It was great chatting to Lewis Hamilton about how I can help him improve his piano skills, next stop I’ll take on the track.”

Lewis Hamilton is a British Formula One racing driver currently racing for the Mercedes AMG Petronas team. He is a six-time World Champion and widely regarded as one of the greatest F1 drivers in history. He won his first World Drivers’ Championship with McLaren in 2008 before moving to Mercedes in 2013, with whom he has won a further five titles.

Lang Lang is one of the world’s biggest classical stars. He has sold millions of albums, topping classical charts and achieving simultaneous mainstream success, and given sold-out performances across the globe with all the world’s leading orchestras and conductors. His most recent album Piano Book, a collection of pieces that first inspired Lang Lang to play the piano as a child and led him on his path to international stardom, was the best-selling classical album worldwide in 2019.