Goats get us. Or at least, our hand gestures. 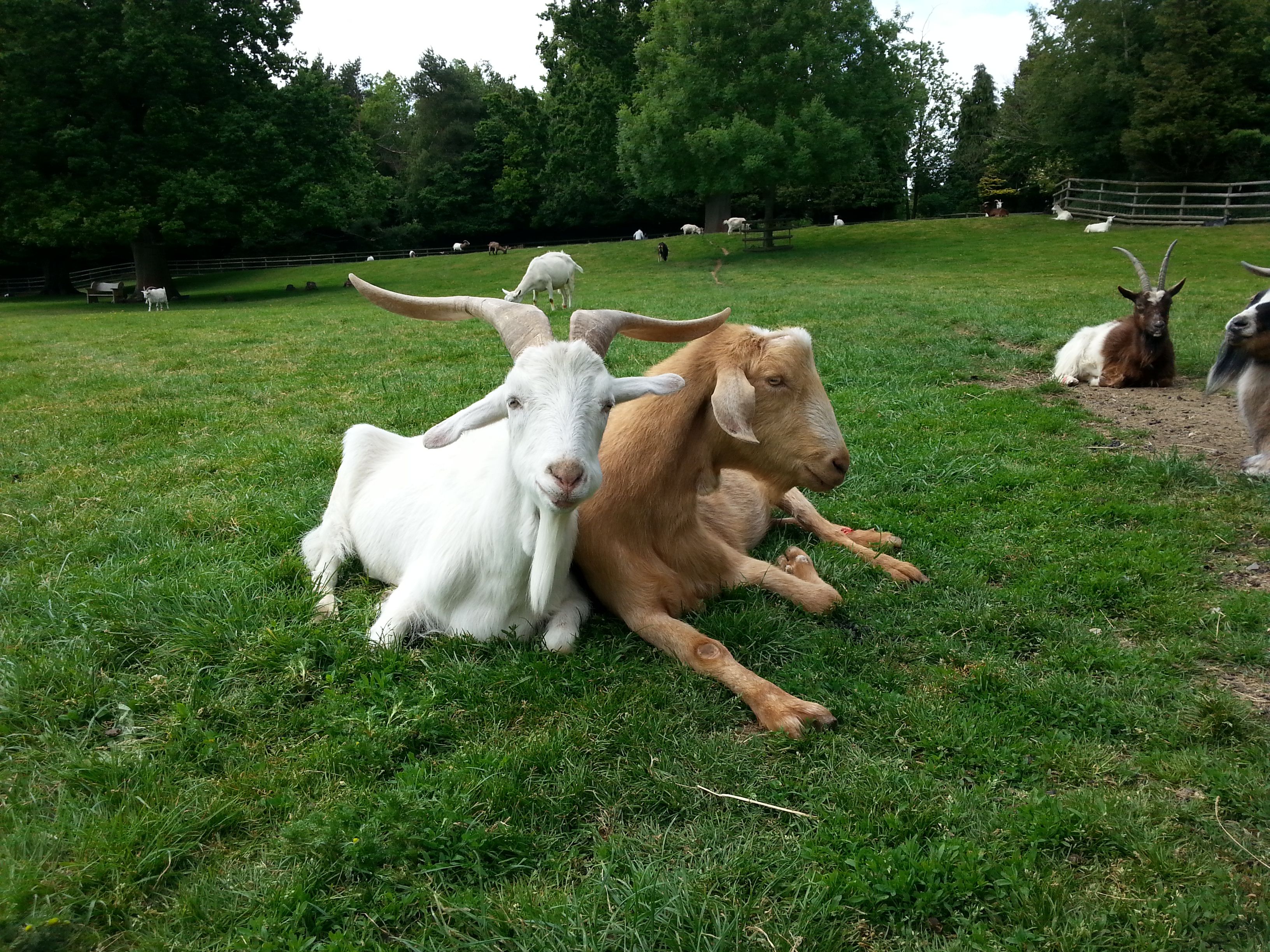 These goats seem to be happy together (Christian Nawroth/)

It was like greeting an old friend. Each morning, without fail, Nadia, a snowy white goat with pink transparent ears, would heartily greet Christian Nawroth when he entered the goat pen. Even if Nawroth had an appointment with another goat, Nadia always made her presence known. “I’d say, ‘Hi, Nadia, how are you doing?’ and we’d cuddle a bit,” says Nawroth.

Nadia is one of 141 goats residing at Buttercups Sanctuary for Goats, located in Kent, England. From 2015 through 2016, they were mildly interested participants in Christian Nawroth’s studies of goat and human communication, motivated mostly by the possibility of pasta and cuddles from researchers. The study, recently published in Frontiers of Psychology on May 19, 2020, aims to shed light on animal cognition tests typically administered on dogs, cats, and apes, and bring them to livestock animals—in particular, the goat, which has been Nawroth’s focus for the past five years. Nawroth’s goal is to redefine how we interact with farm animals, especially when it comes to factory farms, where the majority of the world’s 450 million goats are kept.

Each morning, Nawroth and his two assistants carried two buckets, one filled with pasta, the other empty, to the goat pen. They’d rendezvous with one goat at a time in a walled area with video cameras, and stretch the capacity of goats to understand human gestures.

First, goats had to pass a pre-test before they could participate in the study. Some of them lacked motivation, or were unable to choose the right bucket, and those animals wouldn’t be suited to being subjects in a cognition test. With a pool of twenty selected goats—including Annie, Dingle, Gilbert, Pooky, Vern, Jimmy, Leo, Ralph, and Sticky—Nawroth and his team conducted a series of tests.

Either Nawroth or one of assistants would sit on a chair between the two buckets, and point toward the bucket filled with pasta with the arm closest to it, and record whether the goat would approach the correct bucket within sixty seconds. In the second test, the experimenter pointed with the arm farther away from the pasta bucket. In the last round, the experimenter sat closer to the empty bucket and pointed toward the filled bucket. Nawroth not only wanted to test goats on their ability to understand human pointing gestures, but also if they had a strong sense of referentiality, meaning the ability to extend the pointing finger over an increased distance toward the desired object—in this case, a bucket full of delicious ready-to-eat pasta.

As mentioned in the study, dogs are superstars when it comes to understanding human gestures, including pointing. Using this study, Nawroth hoped to dig deeper into the mechanisms behind which goats, an extremely understudied species, may respond to those same gestures. After a year of data collection, Nawroth and his team discovered that goats succeeded in seeking out the right bucket when the experimenter sat exactly in between the buckets. However, they didn’t do quite as well when the experimenter sat further away from the reward bucket. Nawroth found that goats understand us more than we originally thought.

These tests, however, did not always go as planned. While Nawroth tried to make his research pen “goat-proof,” the goats managed to surprise him. They nibbled on camera cables, even knocked over and smashed some video cameras in their excitement to reach the pasta. Some of the taller goats preferred ‘salad’ over pasta. Trees lined the walled pen, and the dangling leaves were too tempting. “Some of them managed to smash the walls of the test arena,” says Nawroth, by jumping on top of the walls to reach the leaves. “Although there is pasta, they go for the leaves above my head.” 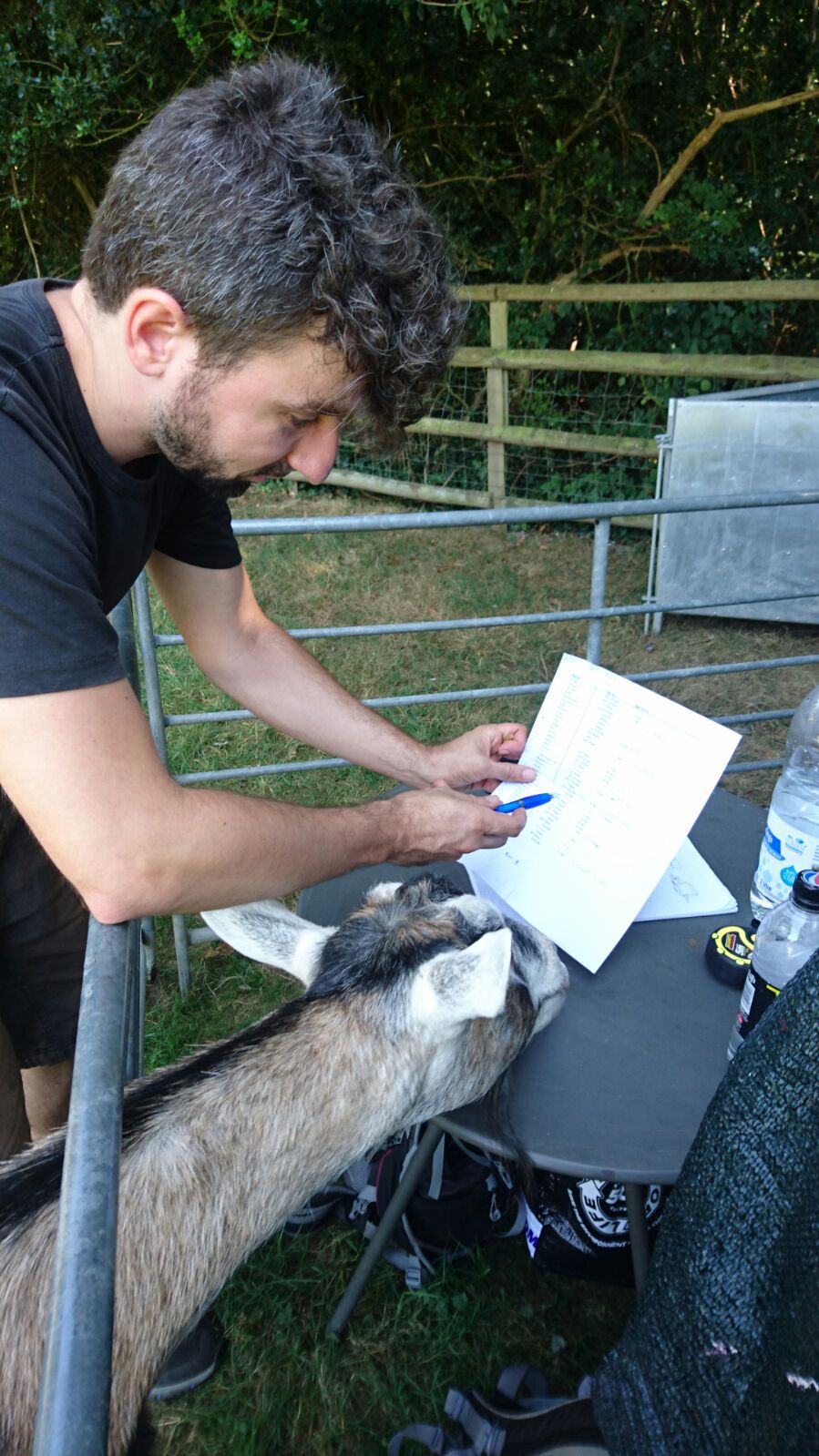 Born in Germany, Nawroth began his career as a biologist researching invertebrates, mostly ants. After receiving his Masters in Biology at the University of Wuerzburg, where he studied great apes, he took a PhD position at the University of Halle-Wittenberg in Agricultural Sciences, which is where he first began livestock research in 2010 on pigs. When he encountered goats for the first time, he knew he was there to stay. Nawroth’s bearded face over our Zoom call brightens when I ask him whether he’d consider returning to the study of great apes. He shakes his head. “My fate has been written out,” he says.

But why goats? According to Nawroth, they’re more curious and less fearful than pigs. They don’t flock as much as sheep, and are more confident when isolated with humans. Nawroth is devoted to the study of livestock animals—cattle, pigs, chickens, goats, and sheep—because he believes they don’t receive the attention they deserve when it comes to scientific research. “We usually attribute farm animals with lesser intellectual capacities than we do for companion animals like dogs and cats,” says Nawroth. “Some use derogative terms, like stupid goat or filthy pig.” The lack of exposure to these animals can exacerbate our antipathy. While 78 million dogs live in American homes, livestock animals aren’t an integral part of most people’s lives—they often spend their entire life on a factory farm.

Even subtle differences like eye positioning make our hearts melt more for dogs than goats. Dogs are predators—they’re designed to track prey with forward-facing, sharply focused eyes, and they frequently make eye contact with other dogs to coordinate hunting. Livestock are traditionally prey, so their eyes are positioned on either side of the head in a unilateral position, which gives goats a 300-degree view to watch out for predators, according to Nawroth. This makes it difficult for a goat to appear like they’re looking straight into your eyes, unlike a dog or cat.

Nawroth hopes to bridge the distance between humans and goats by increasing our understanding of how their minds work. “Given the fact that we house billions of them in industrial settings that aren’t suitable to keep them in a happy state, it’s important to have a diverse set of approaches to improve their wellbeing,” says Nawroth.

Samantha Pachirat works as the Director of Education and Strategic Initiatives at The Farm Sanctuary, a nonprofit organization that advocates for the welfare of livestock animals, including goats. At the nonprofit’s two sanctuaries, which house eighty-one rescued goats, the animals live as part of a herd and frolic on a specially built playground and jungle gym. “We have the chance to get to know them as individuals,” says Pachirat.

Goats and humans can also form lasting relationships, just like Nadia and Nawroth. Fifteen years ago, Pachirat says an intern named Dan D’Eramo joined the sanctuary and started a long-standing bond with Simon, an infant goat who had recently fallen sick. To Simon’s dismay, he had to be isolated in a veterinary hospital for several days. Simon cried every night. D’Eramo moved into the hospital room and stayed with Simon for several nights until the little goat was well enough to return to the herd. Simon never forgot. For the next fifteen years, they remained close friends. Whenever D’Eramo came back for a visit, Simon followed him everywhere around the sanctuary. “Simon made many goat friends, but he never forgot Dan,” says Pachirat. 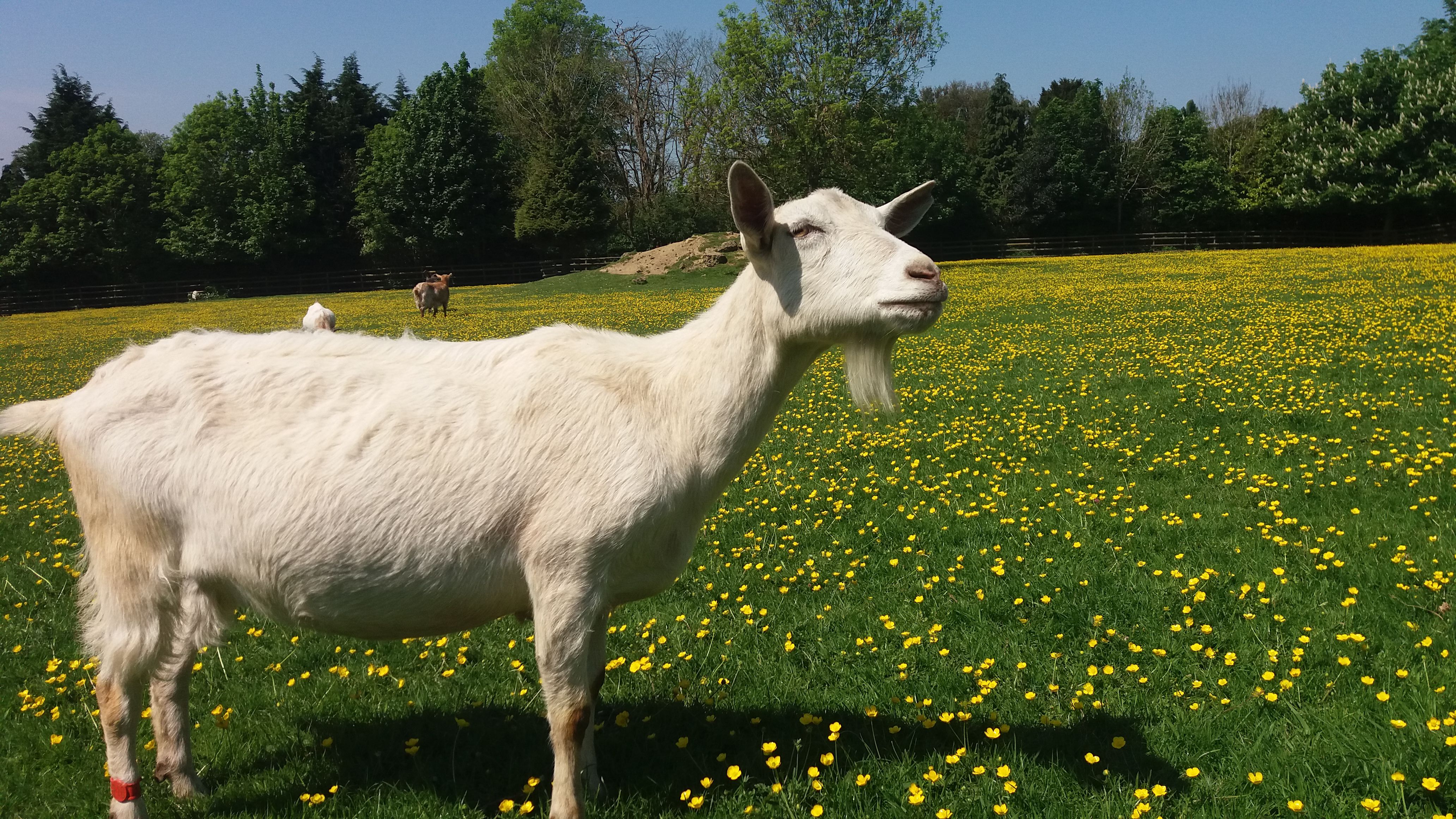 One of the goats in the study (Christian Nawroth/)

The organization, based in upstate New York and southern California, works a three-pronged approach to improving the lives of farm animals throughout the United States, from saving abused livestock animals and keeping them in sanctuary, to educating students and launching advocacy campaigns, including lawsuits against corporations and the United States Department of Agriculture.

1.5 million goats are slaughtered for meat in the United States each year, often on high speed slaughter lines. Most goats are killed at only three to five months old, just a fraction of their natural lifespan, which is between fifteen and eighteen years, according to the Farm Sanctuary. Goats kept for dairy are kept continually impregnated through artificial insemination so that they continue producing milk. Male kids, seen as useless in the dairy industry, are often killed immediately after birth. “Their lives are just dollar signs to the industry,” says Pachirat. “It’s dispensable life.”

This is where science steps in. The Farm Sanctuary provides financial support for scientific research, including Christian Nawroth’s. “Science is telling us what we see living out on a daily basis,” says Pachirat. “It’s powerful. Science is a powerful tool for helping to elevate our understanding and appreciation for these animals.”

“Understanding how they perceive the environment will help us better understand how to design these environments,” says Nawroth. With the onset of COVID-19, Pachirat hopes that a deeper, intimate understanding of livestock animals, including goats, will force the country to reckon with its meat industry. To recognize the “scale and how gruesome some of the methods are” is the first step, she says. “We are working to raise awareness about it. It’s really a symptom of everything that’s wrong.” Pachirat works within the classroom (although now remotely) to educate grade school students on the lives of farm animals. This coming Tuesday, she will teach kindergarten through fifth grade class all about goats via video call.

In the next few months, Nawroth, now stationed at the Leibniz Institute for Farm Animal Biology, in Dummerstorf, Germany, wants to probe even further into the mind of the goat. Do they know what gravity means? Do they have expectations when it comes to objects falling? Do they know that objects that vanish out of sight, perhaps behind a closed door, might still exist? While research lingers at a stand-still due to the pandemic, Nawroth continues to plan for the day he can reenter the goat pen.