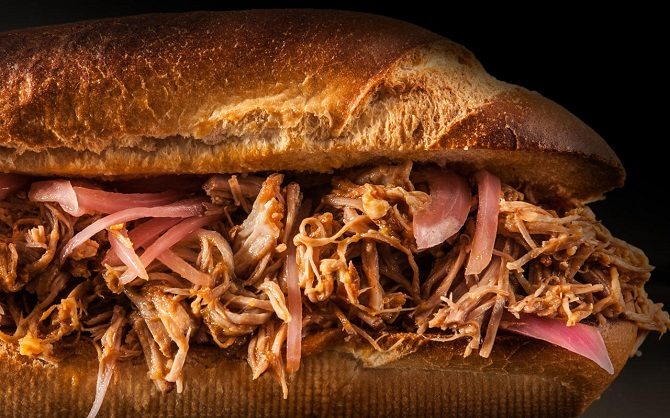 Pulled pork seems easy—and it is!—but there are certain guidelines to follow for truly perfect pulled pork. We break down the art and science of the best pulled pork for you.

Is there any food more versatile than pulled pork? Barbecue platters, pulled pork sandwiches, and tacos around the world would answer with a strong no. Unlike its peers, pork loin and pork tenderloin, it rarely runs bland and dry, and while it has a richness to it, there’s no fear of eating yourself sick with too much of a good thing (fatty pork belly, we’re looking at you). Pulled pork is also large enough to feed a crowd, freezes well, costs little to make, and is pretty darn tough to completely mess up. We think that’s reason enough to master it.

A Primer on Pulled Pork

From Louisiana to North Carolina and as far north as Tennessee, in the part of the United States known colloquially as the “barbecue belt,” pulled pork reigns supreme. There, it means whole smoked pork shoulder (or sometimes, a mix of meat cuts) that have been pulled apart, shredded, or chopped. It arrives at the table with bread and barbecue sauce, and sides—an invitation to be eaten as a sandwich.

Related Reading: How to Smoke Meat Like the Pros

But plenty of other cultures rely on pork shoulder, too. In Michoacán, Mexico, pork shoulder is covered in lard and braised in a copper pot to become meltingly soft carnitas. The Mayans traditionally did the same by wrapping the same cut of meat in banana leaf and burying the meat in a fire pit in the ground until it became cochinita pibil (our modern adaptation pictured below). Today, we love it with everything from grits to nachos. 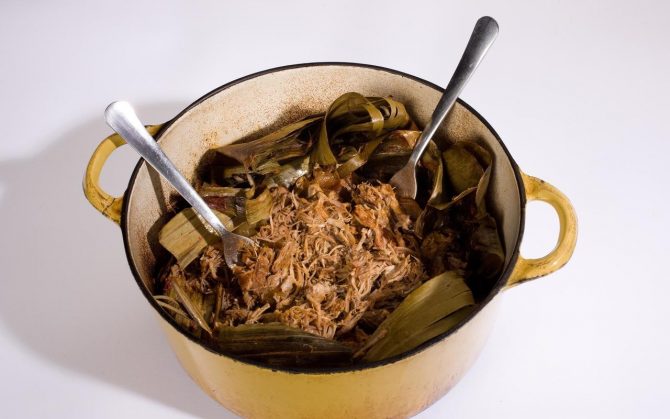 Commercial barbecue pulled pork is always cooked in a smoker, but you don’t have to have experience as a pitmaster or access to a smoker in order to enjoy pulled pork at home, even if you do want it eat it barbecue-style. (If you are interested in learning how to smoke with a basic barbecue, here’s a good place to start.) Otherwise, it’s just as possible to enjoy a variation of Southern-style pulled pork using a basic oven or slow-cooker. It’s worth adding that we love other variations of pulled pork—many of them inspired by Mexico and the Southwest—just as much, too.

Pulled pork is made using pork shoulder, and the vast majority of commercial barbecue pits smoke the entire pork shoulder, which weighs in at 12 to 18 pounds. That isn’t widely available at most supermarkets and butchers; instead, it’s available as two different parts of the shoulder: the fattier, more marbled Boston butt (or butt) and the leaner, tougher picnic (or picnic shoulder). Opt for the Boston butt whenever possible, with the bone in, which helps keep things moist.

A big hunk of perfect pork from free-range pigs.

Related Reading: The Best Meat Delivery Services to Try in 2020

How to Pick Pork Shoulder (& How Much You Need)

When shopping for pork shoulder, avoid any packaged cuts that have been enhanced with water, salt, and sodium phosphate. Instead, look for meat that isn’t too wet, and has a pleasant rosy color with even fat marbling. If you’re cooking for a crowd, factor in about four to six ounces of finished meat per sandwich. 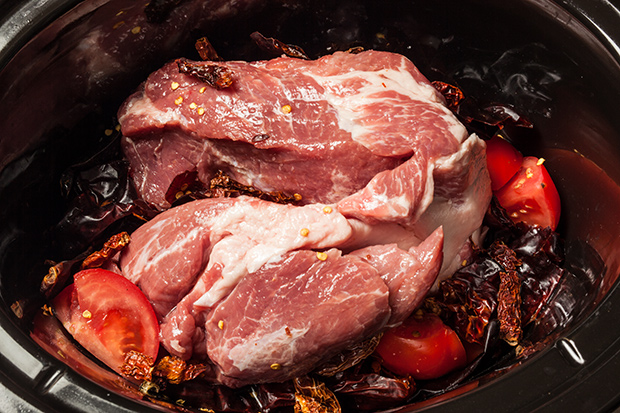 In general, pulled pork is forgiving; the most important thing to remember is that it needs love and time. But it is possible to run into pulled pork problems; here are two of the most common:

The Pork Isn’t Tender (You Can Fix It!)

Common pulled pork problem #1: The pork isn’t “fall-off-the-bone” tender. If the pork is moist but not tender, then it needs more time. Put it back in the oven, barbecue, or slow cooker. If you’re oven-roasting, aim for a temperature of 190°F for a fall-apart-tender state; one easy guideline is to allow one hour per pound of meat with the oven set at 325°F. If you’re barbecuing, a general rule is to get the barbecue to about 220°F, and allow 90 minutes per pound. With a slow cooker, where overcooking is less of a concern, give the meat an extra hour or two before checking on it. 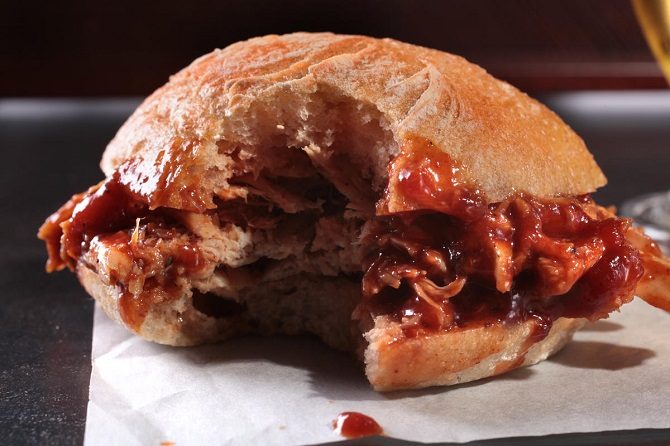 The Pork Is Dry (You Can Kind Of Fix It)

Common pulled pork problem #2: The pork winds up dry and stringy. Make sure you’re using the right cut. Pork shoulder’s filled with connective tissue and striations of fat, which means it’ll break down nicely when cooked low and slow. Other cuts, like pork loin or tenderloin, don’t have enough fat in them, and are pretty much guaranteed to wind up dry. This can also happen if you leave the pork on at too high a temperature for too long. To remedy the problem, pull apart the pork, and use the pan juices to moisten the meat. Adding a thick barbecue sauce will help add moisture back in, too.

If you’re hoping to hone your pulled pork skills, these braised shoulder recipes are a nice jumping-off point.

A slow cooker’s the most convenient way to make pulled pork (as an added bonus, it freezes nicely, too). This recipe starts with a dark brown sugar spice rub; add your choice of barbecue sauce and buns at the end for BBQ pulled pork sandwiches. Get our Easy Slow Cooker BBQ Pulled Pork recipe.

Related Reading: How to Make a Perfect Pulled Pork Sandwich 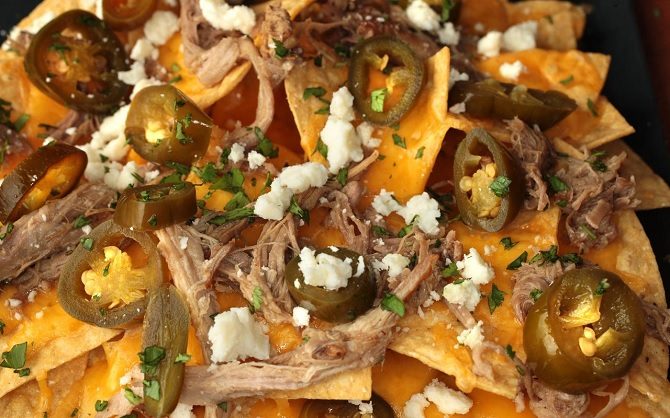 Begin with boneless pork butt, browning it in a Dutch oven and scraping up the flavorful bits left behind in the pot before letting the meat braise in the oven. There’s no sugar in this recipe; instead, habañero slices guarantee plenty of heat. Get our Beer-Braised Pulled Pork recipe.

Once you’ve mastered making our beer-braised pulled pork, give these elevated nachos a shot. Skip the ubiquitous ground beef and instead use that beer-braised pork as a more exciting topping for nachos. Get our Pulled Pork Nachos recipe. 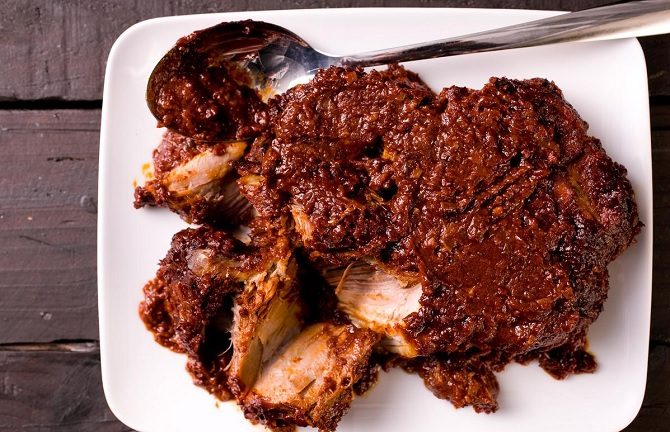 This might have a fancy name, but it’s basically pulled pork with a toasted New Mexican chile paste that adds smokiness with a bit of heat at the end. Serve it with hominy, polenta, or a steamed corn tortilla. Get our Slow-Cooked Carne Adovada recipe. 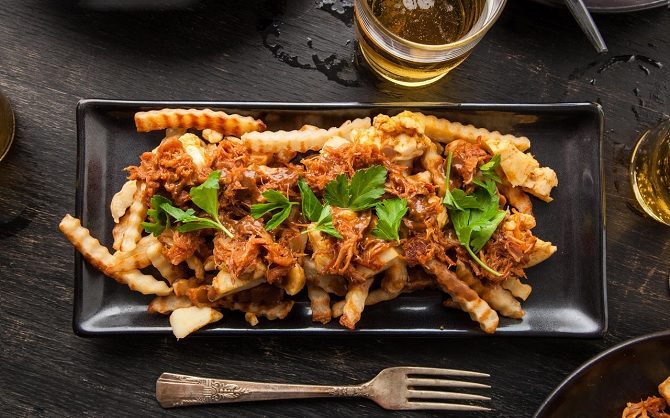 Or take your pulled pork up north, at least in spirit, and pile it on one of Canada’s greatest gifts to the world: poutine. Usually topped with beef gravy, the crisp fries and melty cheese curds marry just as beautifully with tender, saucy pulled pork. Get our Pulled Pork Poutine recipe. 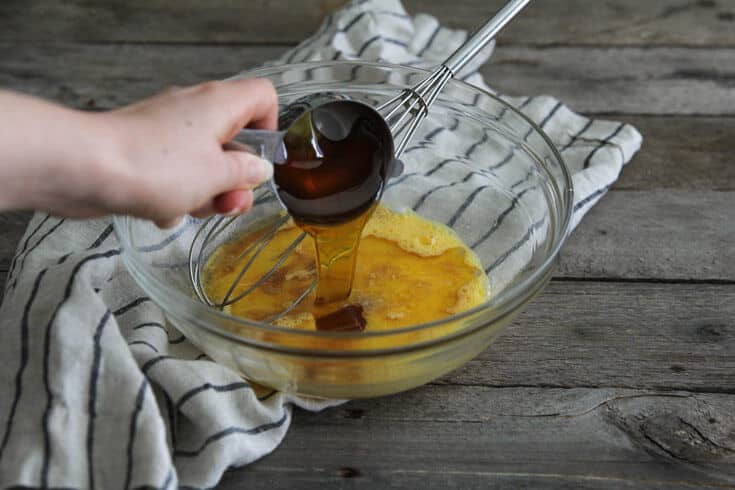 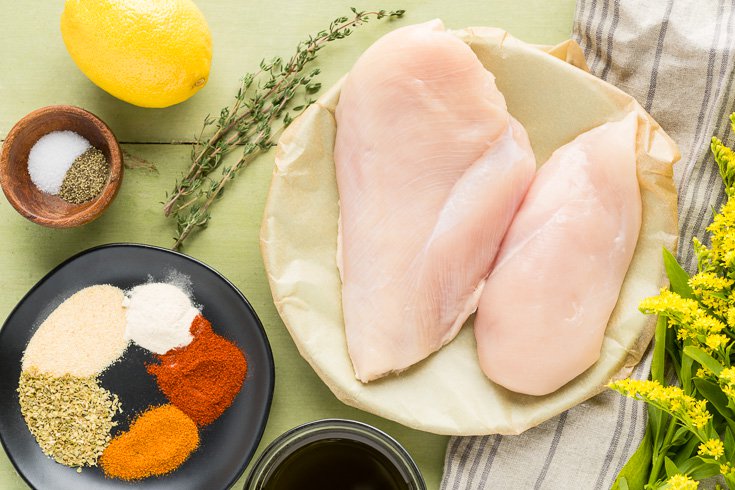