Sensors on the back, front, and bottom help the DJI Mavic Air 2 navigate. (DJI/)

The Mavic Air is the middle child. At $799, it fits nicely between the pint-sized Mavic Mini and the more advanced Mavic Pro models. That can be an awkward position, but in DJI’s case, the Mavic Air 2—just announced today—looks more like it’s in the sweet spot.

The Mavic Air 2 replaces the original, which debuted back in 2019, and features a very similar folding form factor that should be familiar at this point—the company has been refining it since the original Mavic Pro debuted back in 2016. There are, however, quite a few technical upgrades that make it extremely appealing.

One of the biggest draws comes from its 34-minute flight time on a single battery charge, which makes it the longest in the DJI’s Mavic offerings. DJI credits the new electronic speed controllers as well as a revamped battery design for keeping it aloft for longer, even though the Mavic Air 2 is roughly four ounces heavier than its predecessor.

The DJI Mavic Air 2 doesn’t look too much different from its predecessor. (DJI /)

DJI has also added some improved safety and object avoidance features to help keep it up in the air. The Mavic Air 2 includes automatic dependent surveillance (ADS-B) compatibility, which means its positioning system allows the drone to notify the operator if another aircraft is in the vicinity in real time. The APAS 3 object avoidance system now promises smoother movements as the aircraft maneuvers around objects with which it might otherwise collide. The drone has sensors that sense potential collisions to its front, back, and bottom. An auxiliary light helps illuminate terrain to give it a better sense of its environment. 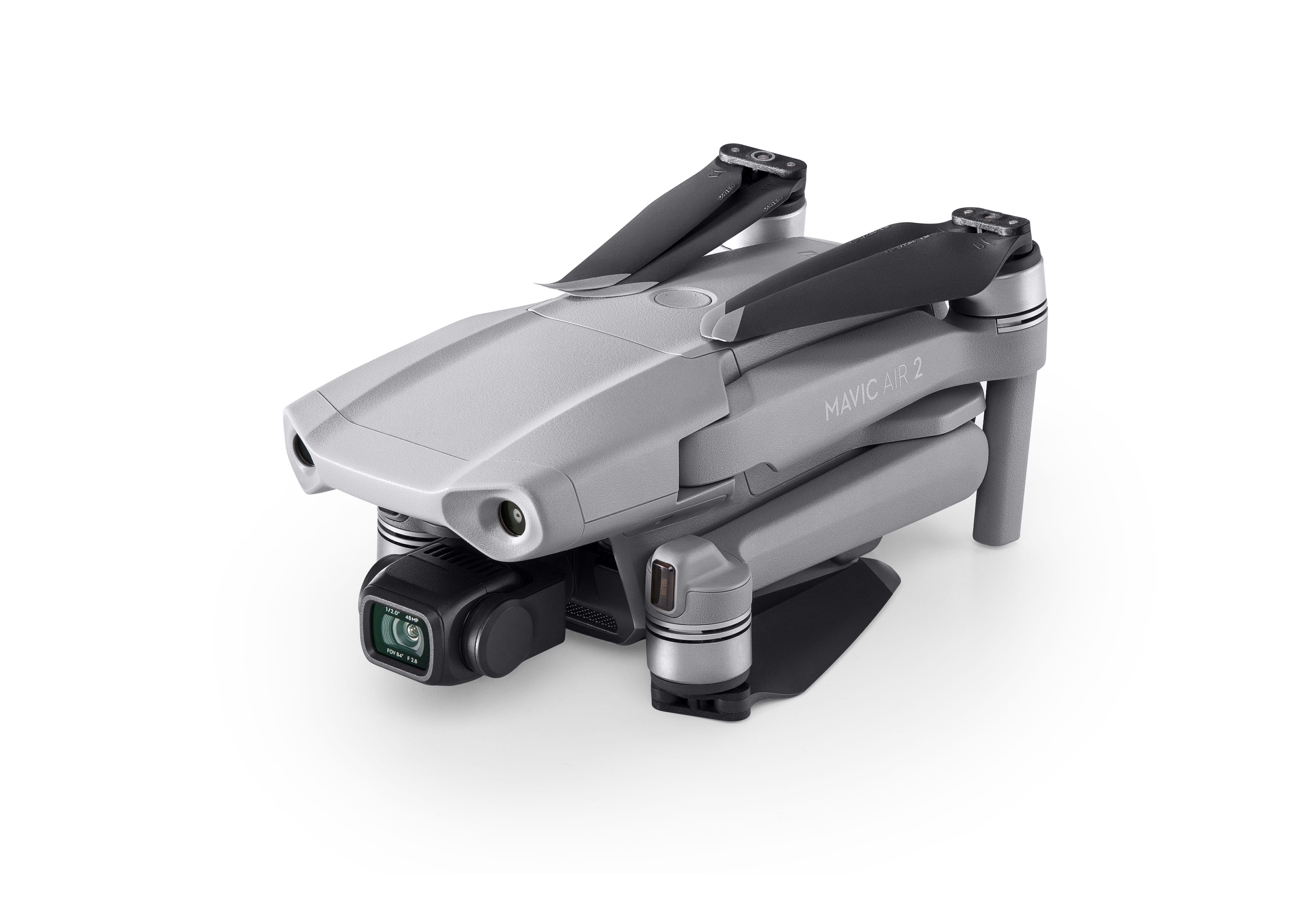 Folded up, it’s still easy to sling into a backpack or camera bag. (DJI /)

With any consumer drone, however, the draw is the camera and DJI has added a few very notable features. The main camera has a fixed lens—there’s still only one drone in the line with a zoom—and it captures 4K footage at up to 60 fps as well as 48 megapixel still photos. If you don’t need full-resolution, you can also pull down 1080p HD footage at 120 fps or even 240 fps for shooting in slow motion. The Mavic Air can also capture photos and videos in high-dynamic range, which should come in handy when shooting in very contrasty situations like shooting into a sunset over the horizon or midday shots on the beach.

While it doesn’t shoot true 8K video, the Mavic Air can capture time-lapse footage and compile it into an 8K video file that you can eventually watch down the road when you get an 8K TV.

The redesigned controller lacks the antennas and looks much better than the previous version. (DJI /)

Connection is crucial for keeping the drone in check, and DJI has upgraded the Mavic Air to its OcuSync 2.0 tech, which promises 6.2 miles of range for streaming video back to a device. It’s also capable of streaming live 1080p video at 30fps.

On paper, it looks like a winner. If you don’t need the full-fledged self-flying modes offered by competitors like Skydio, this looks like the right mix of features and price to fit the needs of fledgeling flyers who don’t want to quickly outgrow their hardware. DJI still enables automated flying modes like object tracking and dramatic pan movements to create cinematic effects. It does, however, leave some of the flying to the pilot between pre-programmed flight patterns.

We’ll be putting together a full test of the new drone in the coming weeks, so stay tuned for a full evaluation.

Easy DIY Mermaid Tail Crochet Pattern: Perfect Blanket For Winter
7 Cocktail Books You Need for Your Home Bar
Apple’s latest iPad Pro might be the laptop replacement you’ve been waiting for
Lo Bosworth’s delicious (and easy) tricks for keeping a veggie-forward diet interesting
Facebook
Twitter
Pinterest
Print
Previous articleCatecholamines and Stress Response: What You Need to Know
Next articleYou can totally sprain your teeth (and you’ve probably done it before)
- Advertisment -