The next pandemic could be lurking anywhere. Can this wildlife-tracking app help prevent it? 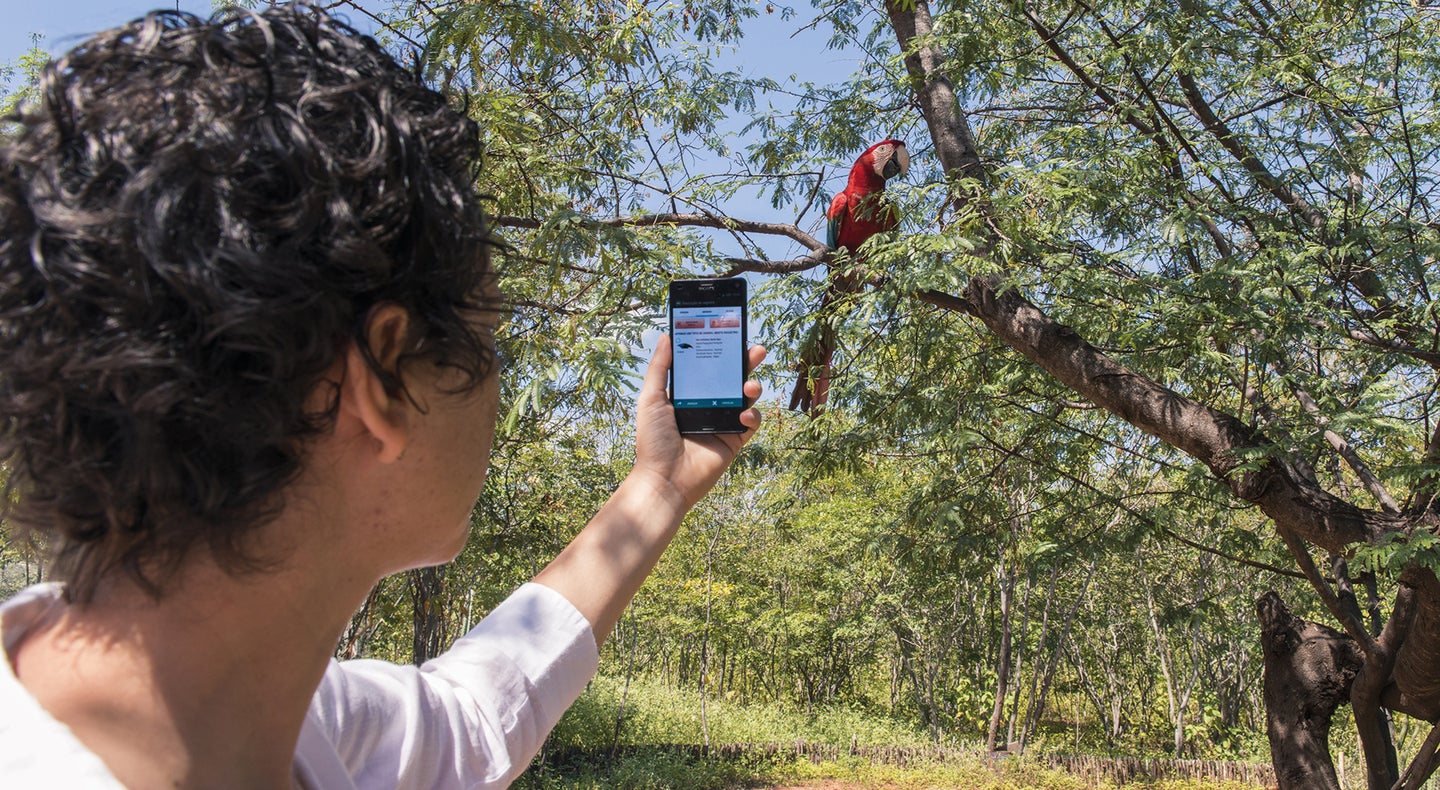 One afternoon in 2018, Carlos Alberto Martins da Silva was hiking in Brazil’s Serra dos Órgãos National Park, a wonderland outside Rio de Janeiro where slender granite peaks rise through cloud forest mists, when he came across a dead monkey. The carcass was too decayed to identify the species or speculate about the cause of death, but da Silva, a professional hiking guide, had reason to be alarmed: Yellow fever has been on the rise in the cities of southeastern Brazil, and outbreaks in humans are often preceded by ones in the virus’s animal hosts. It’s a common pattern with zoonotic diseases—those that jump from wildlife to humans—but Brazil is the rare country that has developed a system to identify potential dangers before they make the leap, an effort that epidemiologists say should be readily replicated elsewhere.

Da Silva whipped out his phone and opened the SISS-Geo app—the acronym translates to Georeferenced Wildlife Health Information System—and snapped a photo. The software allows users to document the health of creatures they encounter and archives the precise location of the sighting. While it’s presented as a forum for wildlife geeks to swap sightings, in reality it’s a Trojan Horse gathering useful data on pathogens. It also signals a grander purpose at a time when a dangerous COVID-19 variant is driving a record spike in cases across Brazil.

Da Silva filled out as many fields as he could in the interface (in addition to basic info about the critter, it asks users to note behavioral abnormalities, gauntness, and so on) and clicked “send.” The information entered the stream of data flowing from SISS-Geo to Rio de Janeiro’s Oswaldo Cruz Foundation, the science institution that launched the app in 2014. There it generated an alert.

In Brazil, primates, especially howler monkeys, “are our flag for yellow fever,” says da Silva, who found the carcass in a grassy opening where the canopy-bound animals don’t normally hang out. A predator might have dragged it there, or perhaps it stumbled through in a feverish delirium, one of the symptoms of the disease—along with seizures, a jaundiced pallor, and blood-laced vomit that looks like coffee grounds. Up to half of serious cases of yellow fever result in death, taking the lives of about 30,000 people per year worldwide. Between 2016 and 2018, the Sao Paulo region suffered an unprecedented outbreak—2,251 cases were documented in humans, along with 1,567 in monkeys, which pass the disease to people via mosquitoes—and the illness was cropping up in the mountains surrounding Rio.

“My first thought when I found the carcass was, ‘did it die in a fight with another animal or was it the disease?’” says da Silva.

Because not every dead monkey, bird, or fish signals an impending epidemic, SISS-Geo’s algorithms filter through incoming data to determine if the species in question represents a health risk. Roadkill is excluded, while multiple primates dying in close proximity is almost sure to raise an alarm. The system pings the relevant health authorities nearest to the location, who then dispatch a technician, perhaps from one of the local agencies, to investigate.

The app’s inventors view it as a model for crowdsourcing pandemic prevention. “The goal is for this to be an emergency sentinel for zoonoses—of any origin,” says Marcia Chame, the Oswaldo Cruz biologist who launched the SISS-Geo system. “Because usually what happens is people start dying, and then we figure out what to do.”

The dangers of dilution

The spread of disease from wildlife to humans often follows habitat disruption that breaks apart ecological relationships and causes host species to come into more frequent contact with people—whether from shifting climatic patterns, logging, or the encroachment of agriculture and urban development. Yellow fever maintains a constant presence in the Amazon, but every seven to ten years waves of infection travel through southern and coastal Brazil (where the country’s major population centers lie), spreading through primates that inhabit the corridors of preserved forest snaking around farms and cities.

[Related: The fight to stop the next pandemic starts in the jungles of Borneo]

The reasons for the spikes remain unclear. Epidemiologists also don’t know what sparked the unusually potent outbreaks of the past few years, though climate change may be playing a role. The cool winters in the mountains of southeastern Brazil are now a little warmer (average temperatures rose 1.3 degrees Fahrenheit over the past half century), allowing mosquito eggs to remain viable at higher elevations.

There is evidence, however, that the narrower the corridors of habitat, the faster the disease moves along them—an example of the so-called dilution effect, the theory that healthy ecosystems naturally sequester zoonoses within their borders. Disease ecologists believe that a high diversity of potential hosts acts as a system of checks and balances, tamping down on viral infections. Keeping the forest intact, Chame says, protects the people living around it.

SISS-Geo has helped public health officials in Brazil monitor the movement of yellow fever along ecological corridors and into urban populations, and to predict where it’s headed next. While no treatment or cure has been developed for yellow fever, there is a highly effective vaccine, and the app has made it possible to micro-target locations where the shots are deployed.

Adriano Pinter, a veterinarian who studies wildlife diseases at Sao Paulo’s health department, remembers the sense of dread among his colleagues in 2017 as the virus swept toward the largest metropolis in the Western Hemisphere at a speed of 1.6 miles a day, according to SISS-Geo data. “We realized that we had a few months to vaccinate, like, 20 million people, but we only had about 2 million doses available at the time,” he says. “So the strategy was to define where the virus would arrive and focus on the populations most likely to be exposed.”

Using logs from SISS-Geo, Pinter mapped various trajectories in the region, giving health officials a two to three-month window to conduct localized vaccination campaigns. While he says it’s impossible to quantify how many lives were saved, he estimates that human cases might have increased 10-fold without the strategy.

Every clue they get could help guide decisions that save lives. The monkey da Silva found in 2018 had been dead too long to biopsy for yellow fever, but it was enough of a concern that Chame put on a workshop to recruit more users in the vicinity of the park. The bigger the pool of these citizen scientists—the app currently counts around 10,000 users and generates around 10 to 12 reports each day—the more effective the tool. Outreach efforts target groups who spend their days at the edge of the urban-wildlands mosaic, such as trekking guides, farmers, and fishermen. The idea is to document all forms of wildlife activity to give a full picture of where different species are moving about the country, no matter if they’re ill or thriving. Stumbling across diseased animals is relatively rare, so framing the app as a sort of social media for wildlife sightings has been key to attracting users and keeping them engaged.

The SISS-Geo app fills a notable gap in current zoonotic disease tracking in that it’s the first to spot and monitor outbreaks in real time. The USAID PREDICT program, one of the only large-scale efforts for an early warning system, focused on cataloging all diseases with the potential to infect humans, as opposed to targeting ones that might be about to make the jump. In its decade of existence, the effort collected more than 164,000 samples from animals across the planet. From that database, it identified nearly 1,000 previously unknown viruses, and estimated that there are up to 1.3 million more with zoonotic potential lurking in global wildernesses. In late 2019, with uncanny timing, the Trump administration shuttered the program.

[Related: We already know how to keep the next pandemic from catching us off-guard]

While SSIS-Geo can’t suss out every pathological threat—animals are often immune to the diseases they transmit to humans—it has tremendous capabilities. A 2014 study of 150 zoonotic outbreaks found that roughly half were preceded by die-offs or unusual behavior in wildlife, Ebola being the most famous example. “We want to identify the factors that generate epidemic risk, which makes it easier to develop public health policies,” says Chame.

Dennis Carroll, who oversaw PREDICT from 2005 year to 2019 year and is now spearheading the Global Virome Project, a private $3.7-billion initiative to identify the remaining unknown wildlife viruses of the world, sees SISS-Geo as a significant advancement in prevention. “It addresses a major limitation, which is that we haven’t really had a coherent way to track the early signals that occur when there is a disruption in the viral ecosystem,” he says, listing Ebola, Marburg, and MERS as examples of known viruses that the Brazilian system could be applied to. “We haven’t had a meaningful way to bring that information together to enable action before a virus enters into the human population. The app is a really nice step in that direction.”

Jennifer Gardy, the deputy director of surveillance, data, and epidemiology at the Bill and Melinda Gates Foundation, thinks SISS-Geo’s crowdsourcing approach should be emulated globally. “I’d love to see a future where everyone has a role to play in spotting the next outbreak, and where this sort of digital intelligence was much better integrated into routine public health surveillance,” she says. In a country with one of the worst records in combating COVID, the app is a bright spot in the beleaguered public health system.

The crowdsourcing approach also offers significant economic advantages, as the labor costs to monitor wildlife health on a mass scale are monstrously prohibitive. The app’s makers continue to tweak the system’s image-recognition tech and algorithms to better filter incoming data (so far it can’t identify species on its own from photographs, for example).

Such changes will help field techs better prioritize the cases they investigate—an important refinement, as finding the specimens in question can be quite a slog. Haroldo Greca, Jr., a veterinarian with the Zoonoses Surveillance Unit of the São José dos Pinhais municipality in the state of Paraná, is one of the people who does the dirty work of testing dead monkeys. He recalls one particularly disastrous trek through unforgiving terrain with local farmers who had better things to do than act as his guide. It got dark and they proceeded with flashlights down a steep ravine to the site of the carcass. “I was covered in mud by the time we got there,” he says.

It’s also heartbreaking work. One alert led Greca to an entire family of dead howler monkeys. Another turned up a dead mother with its baby still clinging to it. “They suffer when they die—the ground around them is beaten up and they have an expression of pain,” he says. “They’re animals that are very similar to us, so it’s very difficult to see.”

For Brazil’s citizen scientists, however, the work of monitoring wildlife is supposed to be fun. The app interface includes a map of the country showing the location and photos of every entry, so users can zoom into the neighborhood where they live or the trail they’re hiking and see the creatures others have observed in the area. This gives it a game-like quality, which da Silva takes to a competitive level, posting obsessively on a daily basis. Each year, the Oswaldo Cruz Foundation gives an award to the top users, which has given da Silva reason to brag: “I’m number two in the country!” But the more players in the game, the more we all win, he adds. “I’m always teaching other people about the platform.”

The post The next pandemic could be lurking anywhere. Can this wildlife-tracking app help prevent it? appeared first on Popular Science.