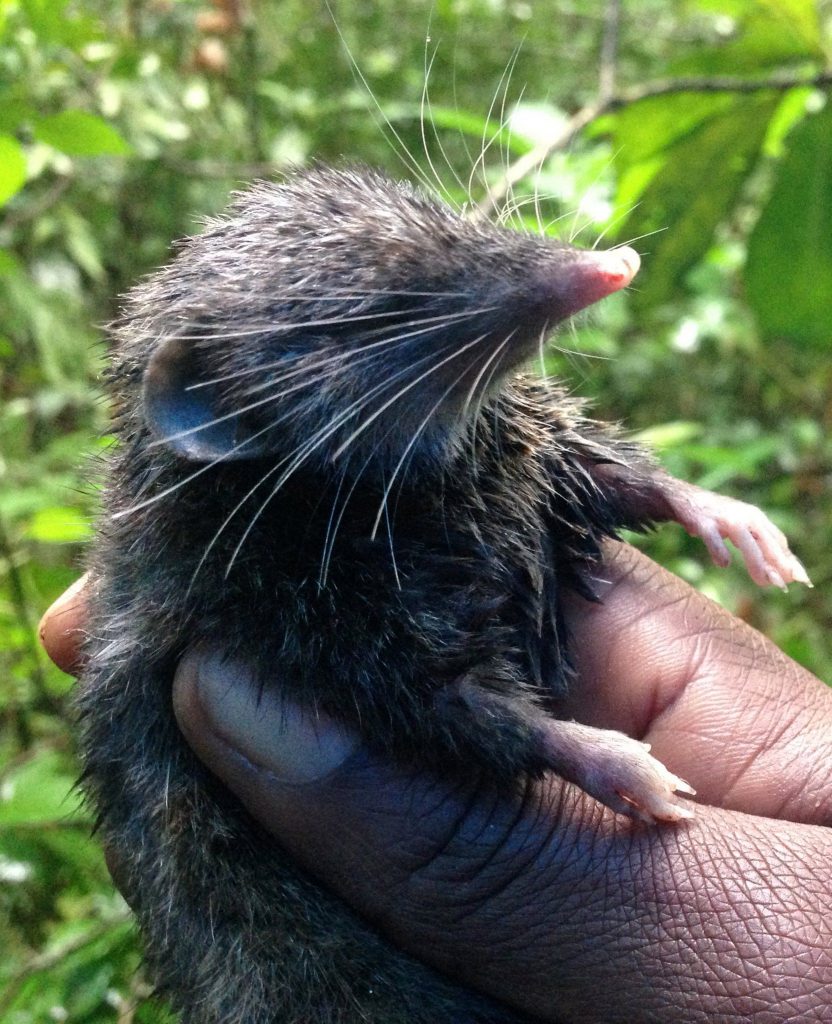 Who says you can’t be tough and cute at the same time? (Julian Kerbis Peterhans/)

What’s small, furry, brown, and able to handle the weight of a full-grown human? Since the early 1900s, we’ve known that this little bodybuilder is none other than the hero shrew. The Congolese critter is legendary for its purported ability to withstand an adult man standing on its back, allegedly scurrying away unbothered once it’s released.

“No big deal, it’s a shrew that weighs like 80 grams, and a 160-pound dude standing on it, and it’s totally fine,” says Stephanie Smith, a postdoc fellow at the Field Museum of Natural History.

While that story might be more of a slightly upsetting tall tale than a science experiment, the strength of these wee beasts is no joke. Their spines are stronger than anything seen in another creature, including other shrews. There are only two species of hero shrew, one with a uniquely structured backbone and one more recently discovered type that almost looks like an intermediary between a normal shrew and the brawniest version.

In a recent paper published in the Proceedings of the Royal Society, Smith and her colleagues investigated what makes these little spines so resilient. CT scans of previously collected deceased shrews revealed spinal vertebrae that were “squished like a pancake.”

Thanks to their density and closeness, the vertebrae form a super close-knit unit that essentially serves as a solid hunk of a bony shell.

Smith also took a closer look inside the trabecular bone, the spongy material that makes up the core of all animal skeletons. Struts, or supportive beams, on this type of bone can give scientists clues as to how the structure responds to pressure, and these shrew’s super brawny backs are no exception.

Smith found that the internal structure of the two hero shrews’ bone had unusually thick trabecular beams that all face in a similar direction along the spine. Compared to a shrew without the same strength and unique bone structure, these signs show that the heroes are built for intense front-to-back compression.

“This all suggests that the shrew is better at taking compressive force in the head to tail direction than the unmodified shrew,” she says. Hero shrews are at their strongest when being smooshed together like an accordion from head to tail.

The weirdest bit? No other creature is known to have a spine like this, and we still don’t exactly know what the purpose of such a unique backbone might be. Because of the way the back strengthens through head-to-tail compression, they probably aren’t able to use their superpower to lift up heavy rocks, Smith says, and they likely aren’t particularly useful when it comes to fighting with other shrews. But it’s tough to say what exactly they’re up to. Studying them up close is tricky due to their small size, skittish personalities, and politically tumultuous homeland in the Congo.

“We know virtually nothing about how they behave in nature,” says Jake Esselstyn, a shrew expert at Louisiana State University.

Esselstyn, who worked on the 2013 paper that discovered the second species of hero shrew, says one theory holds that the little beasts wedge away the outer layers of palm trees to get at the insects hiding within. But the odd thing about that theory is how wimpy the hero shrew’s limbs are. Tougher arms would certainly come in handy if they were essentially doing push-ups to move around hefty chunks of tree.

So even if we’ve uncovered the mystery of the hero shrew’s mega-powerful backbone, what they are using it for out in nature is still the stuff of legends.

Natural Remedies To Manage Osteoarthritis + Causes, Symptoms, And Diet Tips
The Best Baby Products for Your Home On Amazon
The Best Bourbons for the Kentucky Derby
How to Host a Hot Pot Dinner Party
Facebook
Twitter
Pinterest
Print
Previous articleSalad spinners that keep your greens crisp and clean
Next articleCOVID-19 tests are far from perfect, but accuracy isn’t the biggest problem
- Advertisment -