There’s nothing that quite matches the charm of drifting off to the land of dreams in the arms of your beloved, is there? It’s the perfect romantic fantasy, the one where you catch a respite from the troubles of the day by catching a few winks of rest in your partner’s warm and cozy embrace.

What actually happens is quite the opposite of that. The bed often turns into a war zone, with each party claiming portions of it as their territory, often fighting tooth and nail to defend it. While it may be because one of the concerned parties often turn the bed into their personal dance floor, one thing is for sure, the bed seldom resembles the tranquil utopia of one’s imagination.

If you are nodding your head all too knowingly reading this description, then this post is for you. We have created a detailed guide which would help you identify just where you are losing the battle, and help you put yourself and your partner on the path to a good night’s sleep. So, let’s get to it without any further delay: 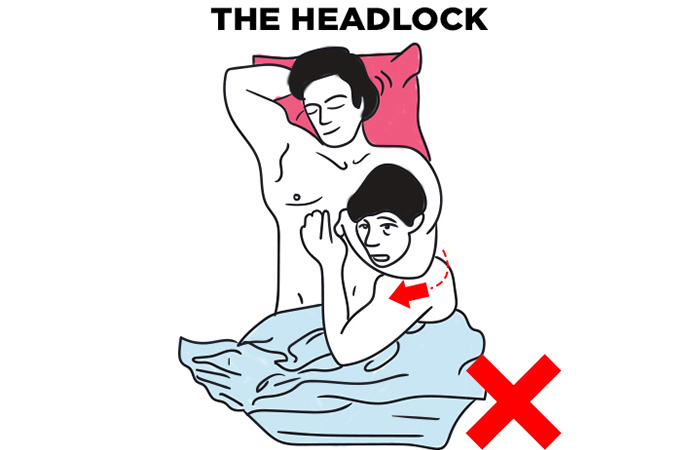 This is when one partner decides to cradle their head in the nook of the other one’s arm, but the said partner has a penchant for flexing their muscles in their sleep (the perennial show-off). And that results in a death grip from which it can be very difficult to pry oneself. Needless to say, this is certainly not the best way to catch a few Zzzs. 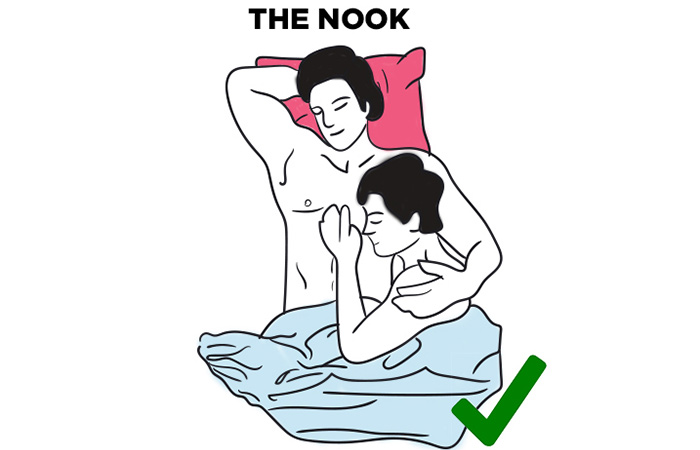 A healthier alternative to ‘The Headlock’, this position differs slightly in terms of the placement of the first partner’s arm which makes all the difference. Instead of holding their SO in a death grip, they gently embrace them by placing their arms around their SO as they rest their head on their shoulder. 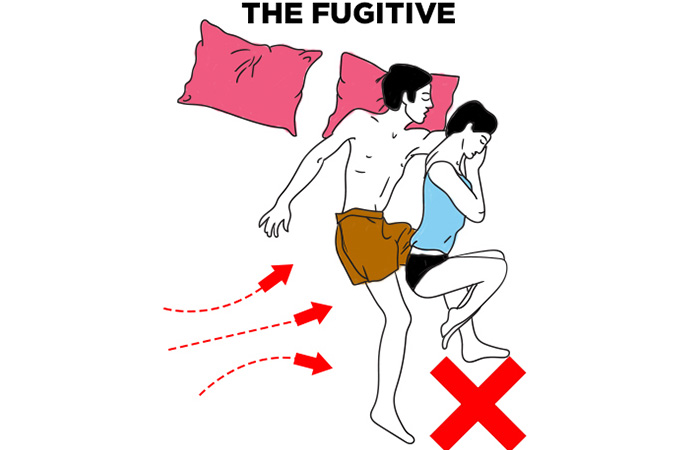 In the said position, one from the couple truly believes that the bed is their territory and defends it quite vigorously against all alien invasion (the alien party is the other half of the couple). This comprehensive defense leaves the other party hanging on to bare scraps, while the first one victoriously sprawls across the rest of the bed.

4. Best Position: The Barely There 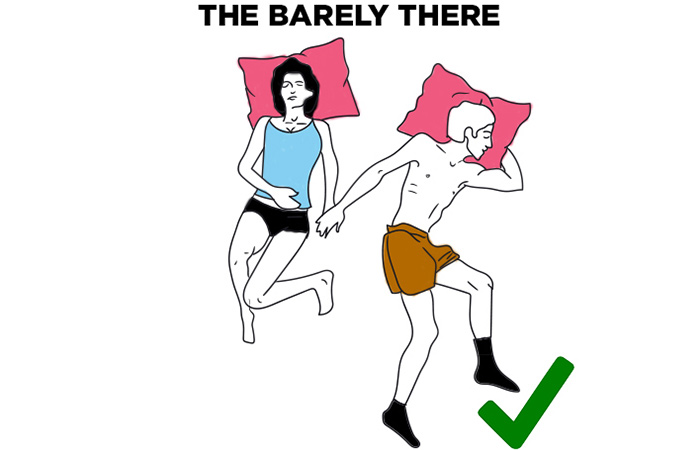 This is the remedial counterpart to ‘The Fugitive’, it ensures that there is a ceasefire between the two parties with each laying claim to their corners. The best part about this position is that there is an element of intimacy, without compromising on the need for individual space. A best of both worlds! 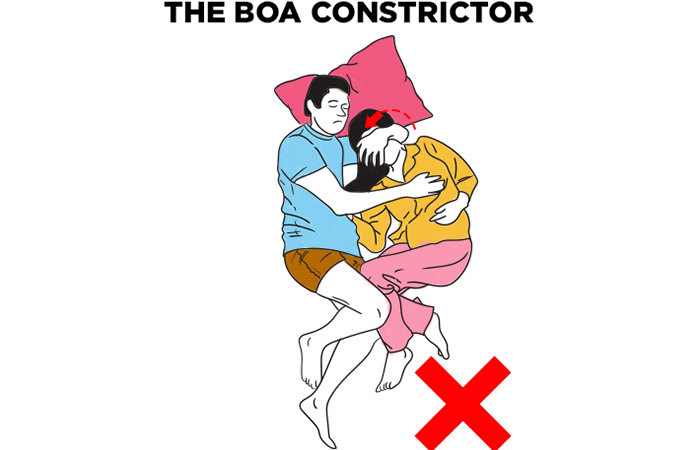 The name itself is suggestive enough to tell you that this is certainly not the position you want to sleep in. And this position often happens as a result of the AC blasting super cold air into the room. When one partner seeks refuge in the other’s arms to keep themselves warm, they often get trapped in a vice-like grip which can be far too cozy for their comfort. 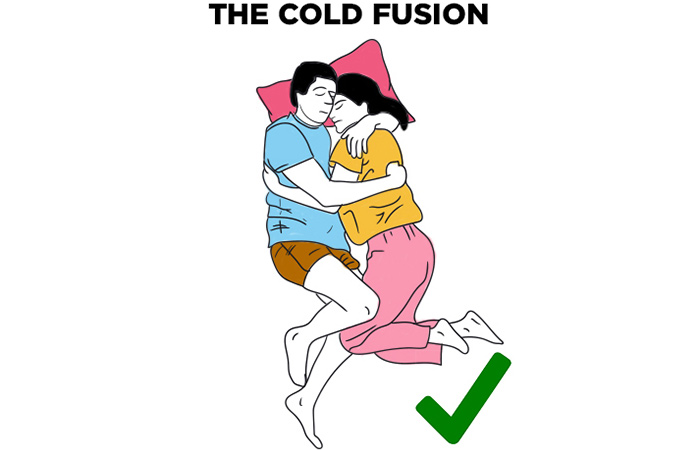 This is the solution to ‘The Boa Constrictor.’ Instead of being suffocated in the arms of your beloved, you should try to position your head at the same level as his. This way, when you do turn to embrace him in order to seek warmth, you won’t be trapped. This position allows you to envelop him in your arms as well, resulting in a more harmonious position and thus, the name — ‘The cold fusion’. 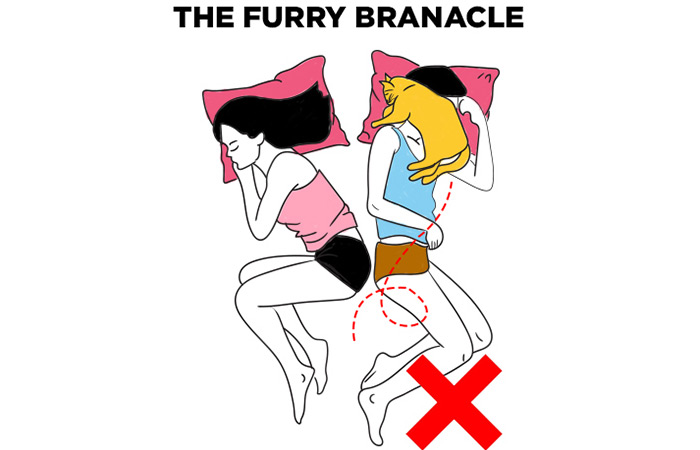 This position is very familiar for the couple who are parents to little furry babies. They say three’s a crowd and for this couple it quite literally is. The pet claims the bed as their territory, blatantly disregarding their parents’ authority and proceeds to plonk itself wherever it damn well pleases. Not the most comfortable of all positions. 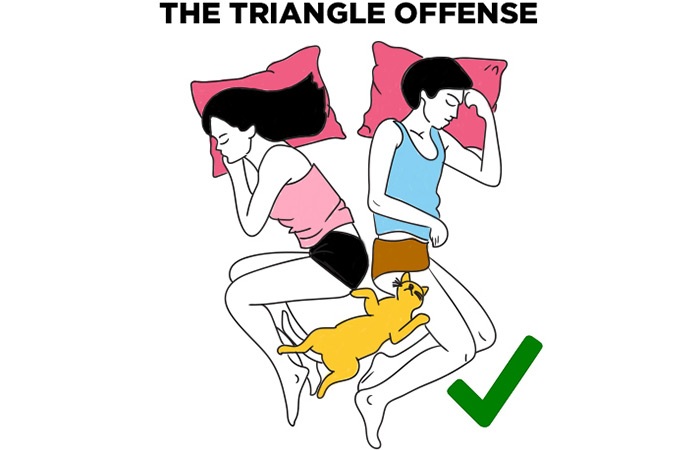 If I would have to give an analogy, it would be that this position is quite similar to the game of Tetris, where you fit in the pieces wherever you can. The space between the sleeping couple is utilized as their pet’s sleeping nook. Or you can even get the pet their own bed, and indulge in a little bit of cold fusion, eh? 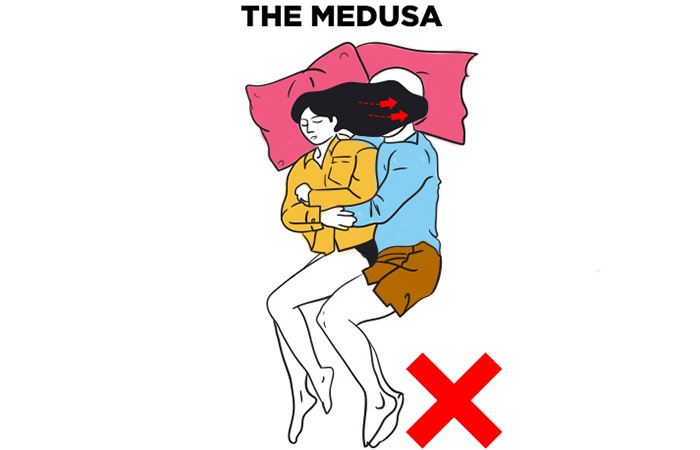 For those who are not quite well-versed with the Greek mythology, Medusa was a monster who had real snakes for hair and anyone who happened to peer at her face was turned into stone. Don’t worry, no one turns into stone here, but in this position, your partner’s luscious mane might be the reason you’re unable to get your precious downtime. 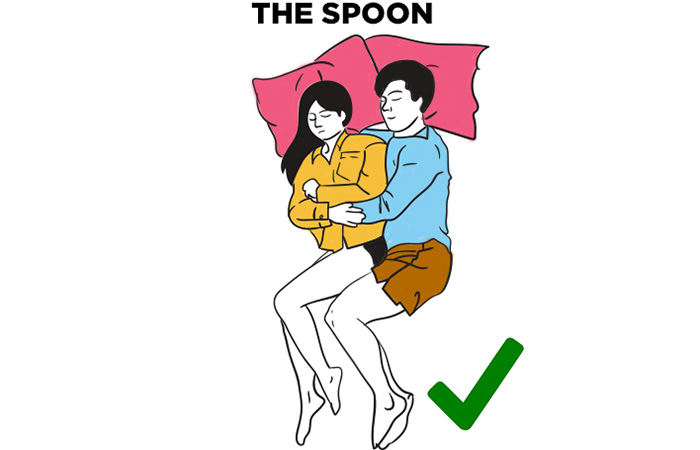 The alternative to ‘the Medusa’ and also a favorite among close-knit couples, this position is the perfect way for most couples to feel close to each other while maintaining a certain degree of independence in bed. The trick is to move your hair away from your partner’s face so that he too can be comfortable while enveloping you in a warm hug.

So now that we have laid out a detailed analysis of why certain positions don’t allow you to get a good night’s sleep, we hope you will take the required corrective measures and get your beauty sleep without any hinderances. Try these positions, and tell us which ones you liked best.

Getting to Know You: Mooncakes for the Harvest Moon Festival
On-camera monitors that will improve your video shots
What Is the Difference Between Fresh and Aged Cheese?
Top 12 Winter Vegetables to Eat & Grow (+ Benefits & Recipes)

Welcome to Chowhound Recommends, Chowhound’s weekly series where our staff shares our favorite food items around a central theme. Whole Foods is obviously known for having lots of healthy organic…

Each month with On the Cusp, we point our astrological magnifying glass on all the people born between two zodiac signs. Because when your birthday falls at either the tail…

Yes, yes, we get it: Gut health is essential for overall health, and feeding your gut foods that promote digestive health—probiotics, prebiotics, fermented foods, and fiber—is an important part of…

Body hair is something natural and we all have it despite the continuous efforts to remove them by waxing, shaving, using hair removal creams and so on. And it’s a…