A Hot Jerk Chicken Recipe to Warm Your Winter Soul 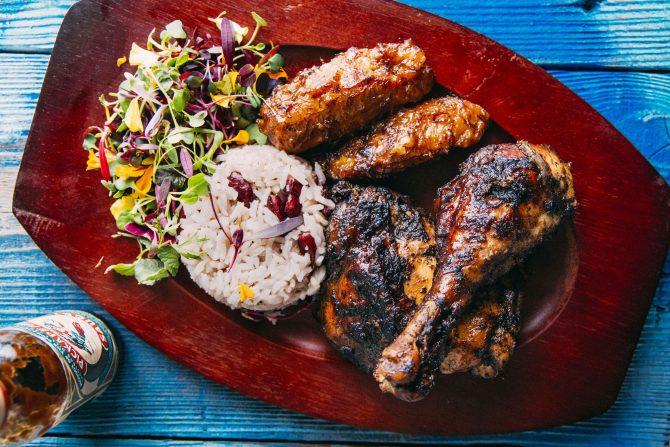 In honor of Black History Month, we salute the many talented African American chefs and their contribution to food and drink. Shani Jones—whose family immigrated from Jamaica—is just the latest in a long line of black female chefs bringing a unique perspective and taste to the table.

Now We’re Cookin’Best New Regional & Cultural Cookbooks for Fall 2019La Cocina (“the kitchen” in Spanish) has done so by offering a physical kitchen space, industry know-how, and connections to startup capital for a demographic who traditionally face immense social and financial barriers when entering the industry. You can taste its impact in nearly every type of cuisine and in every corner of the city by the bay.

Now, and for the first time, La Cocina has published a compendium documenting 75 recipes from 40 alumni of the program entitled “We Are La Cocina: Recipes in Pursuit of the American Dream.” The narrative cookbook is a glimpse into these extraordinary women, where they’ve come from, and how they’ve worked for hand in hand with La Cocina to realize a better life for themselves while enriching the nation’s food tapestry.

Shani Jones is a product of La Cocina, having joined the program in 2014, and now her popular catering company Peaches Patties feeds Jamaican jerk chicken, plantains, and her famous beef patties to the hungry people of Northern California. Below you’ll find some of her story and a dinner party-worthy recipe for authentic jerk chicken plucked from the pages of We Are La Cocina (on sale now).

Reprinted from We Are La Cocina by Leticia Landa and Caleb Zigas with permission by Chronicle Books, 2019

In her parents’ living room in the affluent and largely white Oceanside neighborhood of San Francisco, CNN is playing the 2017 Republican Obamacare repeal debate while Shani Jones’s mother serves coconut cake and ginger tea. Bright green, yellow, and orange walls glow—Shani picked these colors to freshen the house the family has called home for close to forty years. 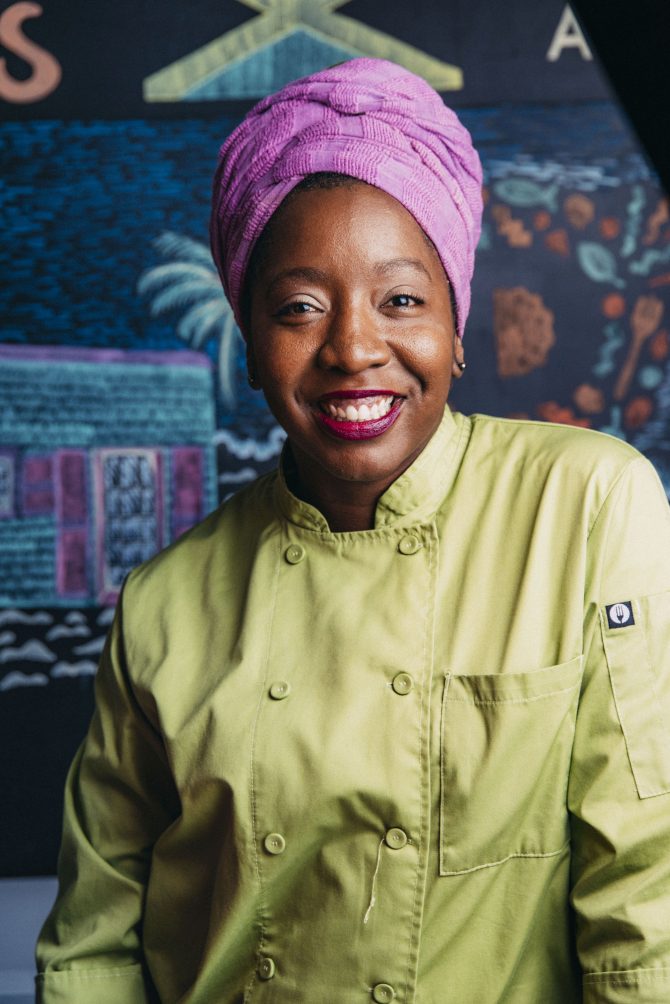 We Are La Cocina

Martin Jones—Dr. Jones now—left his hometown of New Orleans at the tail end of the Great Migration, headed north and west looking for relief from the segregation of the American South. In Trenchtown, Jamaica, Mrs. Jones, née Victoria McKenzie, had always had pen pals. She found them in magazines, and wrote regularly—to Cuba, to Singapore, and, well, to New Orleans. But the pen pal in New Orleans was the only one who came to visit.

Martin bought her a round-trip ticket to San Francisco a couple of months after that first visit, with the promise that she could leave whenever she wanted. She hasn’t been back to Jamaica since. Shani, the seventh of Victoria and Martin’s eight kids, didn’t go to Jamaica until she was in her early twenties. She wandered the streets of her mother’s childhood with her aunt as her guide and stood beneath the window of the nursing school her mother graduated from, not even daring to enter the neighborhood her mother had grown up in, fearing the rumors of violence. That visit was, in Shani’s memory, the first time that she had felt at home.

From La CocinaThese Meatballs in Chipotle Tomato Sauce Will Rock Your WorldWhen she was growing up in San Francisco, the Joneses’ house was always full. Two parents, grandparents, and eight kids make for a crowd no matter how big the home. Both Martin and Victoria worked, but Shani’s mother always cooked for everyone who was around. That was aunts and uncles at the beginning, many of whom bought their own homes just around the corner when they could. Holiday dinners would count sixty-five guests. Mrs. Jones would jerk chicken, fry plantains, and make the peas and rice that are a staple of the Jamaican kitchen, but it was the patties that drove people to develop hiding places. In a house that crowded, you needed to get what you could when you could, and it wasn’t unusual to find patties stowed in the unlikeliest of places, and even less unusual to hear a complaint, yelled through the house, “Who stole my patty?!”

In San Francisco, those patties are hard enough to find anyway; unlike the East Coast, or even LA, the Bay Area never had a large enough wave of Caribbean migration to make a significant cultural footprint. So the foods and the music of the islands are largely confined to homes—just like Shani’s. A child growing up in that space lives in a couple of different worlds at once.

The second time that Shani felt like she had come home was her first semester at Clark Atlanta University, a storied historically black university. She had visited a couple of times, to see some of her older siblings, but when she finally started, she entered a world that she had never been able to find in San Francisco. Here, in Atlanta, there were black professors and scientists, there were Caribbean grocery stores where she could source her jerk, there was a community that didn’t question her right to belong.

We Are La Cocina: Recipes In Pursuit of the American Dream, $19 on Amazon

In San Francisco, Shani lived in between worlds. In the footsteps of both of her parents, she was a tremendous student, succeeding in a public school system that didn’t coddle you at any point. Instead, Shani worked harder to defy expectations and developed tools for doing so. Atlanta’s soul food spots spoke to Shani—places where everyone was welcome, where she wasn’t treated like an anomaly. It was hard to move back after college, but she needed work, and her house now had space in it.

It was while she was driving for Lyft and pursuing her PhD that Shani started to sell some of her mother’s recipes on the side. The economy was only barely emerging from the recession, school was rewarding but hardly free, and the sharing economy offered only so much salve and even less salary. So, in the same home she’d grown up in, she dug her hands into flour next to her mother and rolled out the dough for the patties. She marinated chicken in fiery jerk seasoning, and she found customers—including some, like her, who craved the flavors that they knew and missed, and still others in a perpetual search for something new.

The flavors were ones she’d grown up with, but they found more power in that trip to Jamaica. These were the flavors that connected her to a home that she could always hear in her mother’s accent but that you won’t find in Shani’s voice. One day, in one of her favorite tea shops, she struck up a conversation with a young man, a recent Ethiopian immigrant to San Francisco, and he offered to take her to eat what he called real Ethiopian, in Oakland. They were married two years later. Black, African, Caribbean, African American. Each of them finds different ways to be every day in a city, and a country, that offers a relentlessly limited set of options for what should be a limitless sense of identity.

When Shani’s restaurant opens, she will paint it the yellows, oranges, and greens of her parents’ home, and of Jamaica etched in her mind. Peter Tosh, the Wailers, and that old-school reggae vibe will play from the stereos. You will be able to smell the jerk and saltfish and Scotch bonnets when you walk by; you will feel like you need to enter, and to sit for a while. You will order a patty, or more than one, so you can find your own hiding place when you get home, and the fillings will be the ground beef of her mother’s kitchen, or some of the Ethiopian flavors that Shani now loves, too. But one thing is for certain: here in San Francisco, at least in this little space, you will feel like you belong.

Going to Jamaica for the first time, I felt like I belonged. I had never felt so relaxed in my entire life. Even just getting off the plane. My aunt, Iris McKenzie, was still living there at the time. Going outside and breathing the air, I felt like I actually belonged there. I was able to relate to people’s mannerisms and how they do things. People would tell me I was weird, or quiet. I’m just easygoing. And that’s how it felt in Jamaica. I was able to relate. People were just outside making jerk chicken. My grandmother moved to San Francisco in 1986 . . . she has been like a third parent. We would have porridge (what she’s eating now) for breakfast. We weren’t allowed to eat dessert cereals. Rice porridge, cornmeal porridge; sometimes she would make hominy corn. We’d also have salt fish and johnnycakes for breakfast, steamed green banana. I feel like, even though I was raised in San Francisco, we had more of a Caribbean upbringing, from my mom and my grandmother.