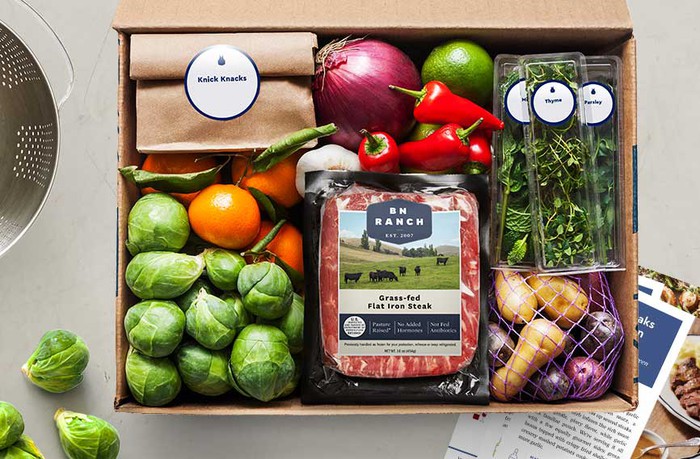 People commonly assume that meal kits (you know, the services that deliver all the ingredients you’ll need to make dinner right to your doorstep) have a disproportionately negative impact on the environment. Everything is pre-packaged in plastic, and then the food is shipped to you? If you’re not shopping for yourself, meal kit food waste must be off the charts.

What if I told you that a new study in the journal Resources, Conservation and Recycling found that the carbon footprint of home-delivered meal kits like Blue Apron is 33 percent smaller than grocery meals? Apparently, the meal kits contribute to less food waste—a finding that didn’t surprise me in the slightest. Why? Because I’ve experienced that reality first-hand.

Since January, my fiancé and I have tried three different meal kit services: Hello Fresh, Home Chef, and SunBasket. (We had briefly dabbled with Blue Apron back in 2015, but we weren’t that into it, and so we decided to skip it in our new experiment.) We had been in a rut with food. We both have busy, intense jobs with long hours, which made planning meals and cooking for ourselves a bit challenging. More often than not, we’d just resort to takeout or eat microwave dinners. (I know, I know.)

We were looking for something to take the thinking out of meal preparation. With a meal kit, the recipes are chosen a week in advance, the food is delivered, and you just cook what’s in the box without having to stress too much about grocery shopping. With each service, we tried a “family plan” that included two meals per week, with four to six servings per meal. That way, we only had to cook twice to get a week’s worth of dinners (plus a decent amount of leftovers) for each of us.

I liked a lot of aspects of the meal kits. The recipes were consistently good and easy to follow, most didn’t take more than 30 minutes to cook from start to finish, and I was spending considerably less mental energy thinking about what I was going to make for dinner. However, I was expecting there to be a lot of meal kit food waste. Surely the portions would be too big and the leftovers would go bad too quickly for us to finish.

I actually found that these meal kits helped us cut back on food waste. Unlike at the grocery store, where you have to buy a whole bunch of parsley even if you’re only going to use a few handfuls of leaves, the meal kit services deliver exactly what you need to cook that meal—right down to the spices, which are pre-portioned. (Sorry, measuring spoons, but I kind of don’t miss you.) Each meal’s ingredients usually come in a paper bag, so that everything is in one place—not just for ease of use but also to avoid forgetting about food because it got pushed to the back of the fridge. (Who among us hasn’t forgotten about the tomatoes in the crisper until they disintegrate into brown sludge?)

Knowing that we’d get a new shipment of meals every week, we also scheduled time to cook our food for the week, to stay on top of things rather than push it off and order takeout instead. Plus, now that our grocery shopping was limited to what we needed beyond the meal kit food (breakfast staples, coffee, pantry items, milk—that kind of thing), there was less opportunity for food to go bad before it was used up.

I feel confident that the meal kits I used helped me send less food to landfills and cut back on some of our more unnecessary food spending.

We also found plans that allowed for just the right amount of leftovers (multiple meals after the initial dinner for each of us, without having so much left over that we got sick of it and let it die in the fridge rather than eat another bowl of chili). There were only a few instances, like a shrimp recipe that used a funky spice, in which we didn’t eat up all of our leftovers before they went bad; for the most part, we ate all of the food that we cooked.

Yes, there is an element of wastefulness when unboxing your food delivery. Every ingredient is individually wrapped in plastic bags or held in plastic containers (down to pre-portioned spices and condiments). Of course, there’s also the fact that all the food is shipped to you—not to mention how some of it, if not sourced hyper-locally, was shipped to the company for assembly before leaving the warehouse. But ultimately, the study found that meal kits’ plastic usage is only a small part of the story. Contributions to reducing food waste seem to outweigh the packaging concerns. I feel confident that the meal kits I used helped me send less food to landfills and cut back on some of our more unnecessary food spending.

This month, we decided to commit to HelloFresh. The plan worked best for us; it consistently provided the easiest and best-tasting recipes (though the others were pretty good, too). While I sometimes miss the spontaneity of discovering a cool recipe online or in a new cookbook and rushing out to buy all the ingredients to try it, I don’t miss the inevitable spoilage that would come with those impromptu cooking experiments. There’s certainly still room to try new things on the weekend (ask me about the five-ingredient linguine I made on Friday night!), but we’re ultimately spending less on food going this route, and using up everything we make, with only a little side of plastic. And that’s a win in my (cook)book.

The next step in my “green” cooking? Cutting back on animal products. (It’s better for the environment.) And here’s how I got over my fear of cooking in the first place.

The Antioxidant Power of Swiss Chard Nutrition
According To NASA, India Is One Of The Leading Contributors Making The Planet Greener!
What is shamanic breathwork and how is it used?
We scoured the internet for the 10 very best plant-based breakfast recipes